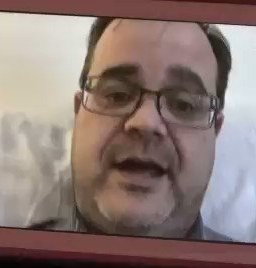 This guy was cured by the "unproven" medicine that Trump is pushing.  Isn't it at least worth a try?


Politics are getting in the way of this virus thing.  Each side wants to stake out their territory.  The Bezos Post wants to make it out that Republicans have "failed" in handling the pandemic.  The New York Times want to use the pandemic as a searing indictment of capitalism in general.   Republicans - and their various media mouthpieces - want to make it out that Democrats are to blame, or at the very least, ineffective.  Failing that, they say it's China's fault!

Meanwhile, people are getting sick and dying. Oh, right, them.

In the news this morning, a piece from Newsweek which casts aspersions at Trump's promotion of malaria drugs to treat the virus:

Trump, who has no medical training, has for several weeks metioned [sic] a combination of an anti-malaria drug, hydroxychloroquine, and azithromycin as a potential cure for the virus that the World Health Organization has classified as a global pandemic.

While there are a number of ongoing clinical trials testing the efficacy of those and other medications to see if any will be effective against the SARS-CoV-2 coronavirus, medical experts have cautioned against the use of any drug therapies that have not been proven to work in a controlled trial.

"Medical Experts" - which ones?  Do they have names?  Gee, Newsweek, this sounds a lot like Trump's "People are saying" quotes.  This is journalism, or an opinion piece?  Because your opinions are pretty much blasting right through here.  Oh, and although Trump is not entitled to an opinion because he has "no medical training" the anonymous author of this piece apparently is allowed to have a strong opinion on the matter.   I guess elected officials, who have to make policy decisions, can't have opinions - which makes it damn hard to make policy decisions.

Of course, Trump isn't just making this shit up. He isn't experimenting on patients in his secret underground laboratories in the White House or concocting home-made brews to cure the virus.  The Chinese have reported success with these drugs, and doctors (you know those medical expert dudes) are actually using these drugs and reporting success.   But hey, it's all unproven, because Newsweek said so.

But in the meantime, it appears these drugs might actually work or worked for at least one guy here locally.  But to hear Newsweek tell it, until we spend a few years with double-blind testing using placebos, we can't possibly use these drugs.  After all, worse case scenario, they might not do anything at all!   Best case scenario - someone is cured.  And apparently, this has happened already.

And yes, like any drug, if you overdose on it, it can kill you.  I am not advocating drinking fish tank cleaner!

From the article in the local news from Jacksonville:


Shapard said it was around 4:30 Thursday morning the doctors told him to call his family, thinking they’d have to put him on a ventilator.

“They wanted me to speak to them perhaps one last time because at seven a.m., I could be on a ventilator,” he said.

Shapard’s family didn’t answer since it was so early in the morning. Instead, he recorded videos of himself and sent them to his family and friends.

“They were all asleep, and once they woke up, I may have been on a ventilator,” Shapard said through tears.

“[I told them] ‘I may be put on a ventilator the machine [that] will work my lungs while the doctors and nurses attack the virus and let me rest while they do the fighting,’” he said.

By Friday morning, doctors moved Shapard down a floor out of the ICU and into the COVID isolation wing. He never did have to be put on the ventilator. Shapard credits hydroxychloroquine, a drug usually used to treat malaria and lupus, and of course the doctors for his recovery.

“They saved my life, those doctors and nurses need to be congratulated," he said. "They need to be loved. They need to be held up as heroes in our community. I’m grateful and humbled because I know some people are leaving the hospital in a very different manner.

One of his doctors told Shapard they’re studying and using the drug. He said the doctor told him not everyone responds to the drug, but many are.

He was in the hospital for a week and was released Wednesday. He's now at home recovering.

That's my worry - that I would be put into a "double-blind" test and get the placebo and die and they would say, "Gee, I guess the drug does work!  Noble sacrifice on your part, Bobby!  Thanks!"

And won't the same people who are running down Trump over this feel stupid if it turns out to be a cure - or at least a partial one - for this virus?   Oh, right, the press - never responsible for publishing untruths.  Just put a retraction on page 10 in tiny letters.

In the meantime, I am self-administering as much overt-the-counter anti-malarial drugs as I can - quinine, in fact, in the form of tonic water, mixed half and half with gin.  Even if it doesn't work, it helps me forget all this nonsense going on.