Being Self-Reliant in a Technological World 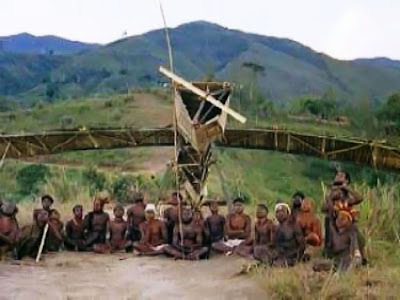 Primitive "Cargo Cults" in the South Pacific worshiped technology without understanding how it worked. Have we devolved into a modern version of the "Cargo Cult" with regard to our electronic technology?


Living in the Western World today is to live in a world of increasingly complex high technology. We have communications devices that would boggle the mind of a citizen of just a decade ago. We heat and cool our houses with increasingly complex and efficient heating systems. Even the most primitive personal computer today has more power and speed than a "supercomputer" of just a few decades past. Our cars are becoming increasingly complex in terms of drive-train and electronic accessories. And as costs for these electronic gadgets continues to drop, we end up owning more and more technology.

The average middle-class American family has three, possibly four cars, two or three refrigerators, a microwave (or two), at least one computer, if not one for every adult in the household, several cell phones, televisions, video games, and the like. It is a mountain of technology. Even a typical family living "below the poverty line" has many of these items - a car, television, microwave, air conditioning, and the like.

And yet as our lives become increasingly complex and reliant on electronic technology, as individuals, we have become less and less technically sophisticated. Enrollment in Engineering and other technological studies has dropped over the years, for domestic citizens, with these slots being increasingly filled by foreign students. We have become a nation of dummies - and a library of books has been generated just for us. Every piece of technology, science, or the law can be explained to you in dumbed-down terms in a "(fill in the blank) for Dummies" book.

While millions struggle with unemployment during our recession, technological jobs go unfilled, and many high-tech companies look overseas for applicants. Even technician positions to repair and maintain equipment remain vacant. We all want to be highly paid office managers, it seems, but few want to be HVAC, automobile, or computer repair persons.

It is ironic. We are a technically sophisticated society but a technically ignorant populace. Americans, it seems, have become like cargo-cult savages, picking up and using technology, with little thought as to how it works or why. Our ignorance is costly, too. Many throw away or squander technological resources needlessly, from lack of knowledge on how to use such technology, fear that such technology will break, or from the desire to have the latest-and-greatest electronic toys.

Over the years, many movements have come and gone, trying to get back to the concept of self-reliance. This started more than a century ago, with the creation of religious communities (Amish, Oneida) or philosophical pursuits (Thoreau). It never died out over the years. The resurgence of the "commune" in the 1960's was just a latest iteration and reaction to the increasingly technical nature of our society.

Many folks, it seems, want to "get back to simplicity" and it is not hard to understand why. Technology can take control of our lives and end up dictating to us how we live, rather than the other way around. Moreover, as a largely technically ignorant society, we cannot cope with the technology itself, on a self-reliant basis, and thus are helpless when confronting it. Like the savages in a cargo cult, or the proto-humanoids in 2001 A Space Odyssey, we can do little more than scream out our frustration and chant prayers to these technological Gods.

Many want to "unplug" from this technological madness, or "live off the grid". Ironically, such efforts often lead to more technology, not less (ever tried to wire up a bank of solar panels?). Going "back to nature" or "living off the land" has been proven over and over again not to be a practical way of life. Communes fail, religious communities die out. Even the Amish use cell phones now.

It is possible, however, to be more self-reliant in a technological age, without resorting to living on a commune or sleeping in a yurt.

The first step is to utilize an appropriate level of technology for your personal life. Many young people (the target market) have to have the latest and greatest technology, particularly when it comes to cell phones and the like. While such toys can be fun, as I have noted in other blog entries, being "plugged in" to technology all the time can be stressful and also disconnect you from real life. Yes, the iPhone is a cool toy. But do you really need it? Or more succinctly, how many toys like that do you need?

In other words, you can simplify your life not by avoiding technology, but by limiting the amount of it you use to that which you really need. If you own several computers, cell phones, televisions, audio equipment, and the like, then it will be more and more burden on yourself to maintain all of these items. Simplify by using less.

Incidentally, this may be one reason the home stereo business has taken a hit lately. Traditional stereo systems have been supplanted by the "surround sound" home theater or by the home computer or iPod. It is not that people don't want a traditional stereo, but that maintaining all these separate appliances ends up being too much for most folks.

The second thing is to take care of your equipment. This sounds self-explanatory, but really isn't. Many people think they take care of equipment while actually abusing it horribly. Most consumer-grade equipment and technology is cheaply made to a price point. As a result, much of it can easily break and end up in the trash heap long before its time. If you treat consumer grade equipment like the cheap junk that it is, it will last a long time. Dropping things, manhandling them, aggressively using them, and neglecting them can destroy such items in short order.

For example, our cleaning lady utterly destroyed an Electrolux vacuum cleaner in a matter of a year. In the old days, these cleaners were made of steel with rubber trim, and could withstand being dropped down the stairs with little wear. Today they are made of plastic. They are just as servicable, but perhaps not as robust. Her approach to vacuum cleaners was to yank them across the floor, and if they caught on something to jam, pull, kick, and curse them. When finished, she would unplug the cord by yanking it from across the room, as if cracking a whip. Needless to say, the cleaner took a beating. And yet many folks treat equipment this way.

It takes extra effort and work to use equipment more carefully, but the payoff can be in a service life that is two to three times normal. That $500 Electrolux went to an early grave unnecessarily. We fired the cleaning lady and bought a $75 GE vacuum cleaner at Wal-Mart. It has lasted five years with careful use.

When I visit many people's homes, I see their home computers or other electronics set up in awkward locations - teetering on tiny desks or tables, haphazardly set up on the floor, covered with dirt and dust bunnies. Dirt and dust bunnies get sucked into electronics and can layer themselves on temperature-sensitive microchips, causing them to overheat. I did this myself the other day, frying a perfectly good video card by allowing it to get dirty. I was fortunate that I could find a replacement on eBay for $25 and clean the computer (carefully) with compressed air and a vacuum cleaner.

But lesson learned, I took the computer off the floor from under my desk (where it was also getting kicked) and placed it on top of the desk, where it was accessible and easier to clean, and also less likely to get dirty. I now clean it at least once a year, using compressed air and a vacuum to blow dust out of the housing, keyboard, etc.

Most modern electronics makes use of membrane-type pressure switches, whether it be for keyboards, remote control devices, or even controls on your stove or microwave. These switch pads are cheap to make but usually the first thing to wear out. And yet I see people "mash"these types of buttons without realizing that they may be breaking the most delicate (and impossible to replace) part of the machine.

We've had a stove and a microwave "wear out" this way (and it happened to a friend of ours, too). The "stop" or "end" button guess the most use, and guess which button wears out? I found that we were hitting "stop" or "end" two or three times, when once would suffice. I guess we had a Cargo Cult like superstition that the machine would somehow not stop unless the button was mashed repeatedly. And guess what? Once the "stop" button is broken, the stove is basically useless. Replacing the control panel is the only solution, and that cost nearly as much as a new stove. Of course, buying an "old school" stove with mechanical controls is one alternative, but increasingly, these are getting harder to find.

Similarly, connectors and power supplies are two major sources of failure for most electronic equipment. How many cell phones or other electronic toys have you had to discard over the years because the plug-in jack breaks or gets "intermittent". An MP3 player with a broken output jack is a broken MP3 player, period and ready for the trash. Unless you have tiny hands, are skilled with a soldering iron and have lots spare time, most modern electronics are trash once they break.

These are just some ideas I've had concerning this phenomenon. I will add to this posting as other ideas occur to me.
‹
›
Home
View web version