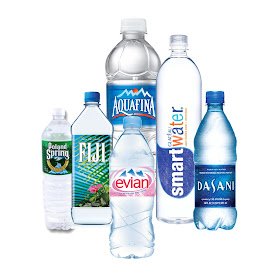 - The Rime of the Ancient Mariner


In recent years we have become more conscious of water consumption in a way we never thought of decades ago.  We are dehydrated, we are told. Americans don't drink enough water.   We should drink quarts and quarts of water every day.

At the same time, water fountains have gone the way of pay phones.  If you want a drink of this precious water, you'd better be prepared to pay for it.  Bottled water, purified water, even designer waters are sold at prices that are as high as, if not higher than soft drinks or even beer.

We found ourselves in a pattern of buying water like everyone else.  At the gas station, we would spend $2 on a couple of bottled waters.  At the wholesale club we would buy bottled water by the case. Quickly, our budget for water went from zero to hundreds of dollars a year in no time.

Many folks buy at least one bottled water a day at a convenience store or fast-food restaurant for at least a dollar a bottle.  Think about that, that's $365 a year, right off the bat - for something that used to be free.

During the recent economic downturn we started scrutinize our spending more closely.   Bottled water was one area we targeted for savings.   In order to kick the bottled water habit, however, you have to take on new habits, otherwise you may end up spending more on bottled water than before.

Just as cigarette smokers try to "quit" by not buying cartons of cigarettes and end up paying even more by purchasing them by the pack, not buying cases of bottled water and buying more 99-cent bottles at the convenience store is no solution to the problem.

Since drinking fountains are few and far between, you have to get into the habit of bringing your own water with you, and this may mean having to find some sort of container or canteen and remembering to clean and fill it on a regular basis.

Spending $30 on a water bottle is not solving anything. I found some inexpensive water containers at garage sales which worked well after a good cleaning.  A neighbor gave us a gallon Coleman water jug for free.   For a long day at the beach or on the road, such a jug, with cups, can provide water for the whole family.

I got into the habit of spying drinking fountains and making a mental note of the best of them along my daily route.  They are fewer and far between, but still out there.

While you can spend a lot of money on water purifying jugs, filters, and the like, I for one do not think they are necessary.  Most American tap water is perfectly drinkable, and most of these filters take out only large particles in water and do little to take out any chemicals that might be present.   Bottled waters are not much safer than tap water as many contain bacteria and also the plastic used the bottles can leach into the water.

Here's the deal. Other than cholera, most bacteria in water is not bad for you.   Get over the idea that the city tap water is going to give you "germs" unless the municipal water supply has advised you otherwise.

Another reason not to bother buying a water filter jug or sink filter is that you may already own such a filter in your refrigerator.   Many modern refrigerators with water dispensers, either inside or through the door, have built-in filters similar to the filter jugs or sink filters.  Why buy what you already own?

Kicking the bottled water habit has reduce the amount of recycling containers we have to handle as well.

The best things in life are free, they say, and water is nearly so.   In fact, we are lucky to live in one of the few countries where tap water is drinkable, cheap, and readily available.   We take water for granted, but in most places of the world, drinking what comes out of the tap is a bad idea.

The bottled water industry wants you to think that is true in America as well, as it would mean huge profits to them if you paid 99 cents for every pint of water you drank.   And perhaps this same industry has a vested interest in allowing our tap water system to become degraded and contaminated.  Time will tell in that regard.