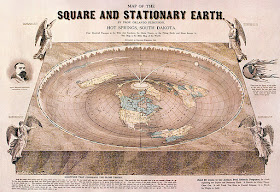 Flat taxers are like flat earthers - wanting simple solutions to complex problems, mostly because they are scared of math.


Tax "reform" is on everyone's lips these days.  But before you jump on a bandwagon, be sure it is not heading off a cliff.  Much of these proposed "reforms" end up as huge tax cuts to the rich and increased taxes on the poor.

The point is to confuse the issue.  Sure, the tax code is large.  But most of it does not apply to you.  There are whole sections on corporate taxes, estate taxes, and the like, which likely will never, ever, in your lifetime, apply to you.  The code has to cover all sorts of situations, most of which are anomalies or so-called "loopholes" that the IRS has tried to close.

The tax code is like the Patent laws.  Yes, 35 USC probably has more words than the Bible - or at least if you throw in 37 CFR and the Manual of Patent Examination and Procedure with it.  But 99% of my business involves three short laws:  35 USC 112, 102, and 103, which would fit on a single sheet of paper.  And chances are, your tax situation falls along similar lines.

So dumping our tax code because you think it is "confusing" or that "math is hard!" is idiotic.  But it is easy to sell a crappy deal to people who think this way - and a crappy deal is what it is.

For example, Herman Cain proposes a "999" tax plan, with a 9% income tax, a 9% "business tax" and a 9% sales tax.  For most people, this represents a staggering tax increase.

For the middle-class, who pay their federal income taxes at a 15% marginal rate, the 9% flat tax plus the 9% sales tax will represent a huge tax increase. Since most middle-class people spend most of their money, the combined effect will be near an 18% tax on all income.  And with the loss of the home mortgage interest deduction, this effect will be even higher.  Even if we leave in the home mortgage interest deduction, cutting the tax rate to 9% reduces the overall benefit from it.

For the very wealthy, who are in the 30+% brackets, a 9% rate is a Godsend.  And since they invest their money, they pay less in sales tax, as a percentage of income, as do the poor.  And of course, the wealthy can afford to do weird things like buy their Mega-Yachts in Mexico and register them there, to avoid taxes entirely.  Sound farfetched?  Well, they are doing it already!

Not to be outdone by the 999 plan, Governor Perry is now offering an "optional" flat 20% tax.  You can see why this would be "optional" as people in the 15% bracket certainly would not see it as a bonus.  But those in the 30+% brackets would see it as a real boon.  Not mentioned, of course, is where the government gets its revenues to build stealth submarines after cutting its income in half.  And of course, if the tax is "optional" then it leaves in place the existing tax system for most people in the lower brackets.

Do any of these proposals make sense?  Are any of them realistic?  Bear in mind that our present income tax system started out as a simple, nearly flat-tax type system, and over time, morphed into the system we have.  Even assuming Congress could agree on a new tax plan (good luck with that!) it would not be long before exceptions, deductions, credits, progressive rates, and the like are factored back in.  People will find ways around new rules, forcing Congress to come up with fixes.

In no time at all, you'll end up with a tax code pretty much like the one we have.

The real motivation behind this movement for "tax reform", as I noted before, is to further cut the taxes of the wealthy.  No matter how you slice it, flat taxes, 999 plans, or whatever, end up cutting the taxes on the top earners dramatically - nearly in half - while keeping the poor and middle class at the same rates, if not higher.

What is the point of that?

And that is where the irony of flat-taxers comes in.  For some reason, it is not hard to convince poor and stupid people (usually one leads to the other) that they are being overtaxed, when in fact, they might pay little or no taxes at all.  A $50,000-a-year office worker listens to Rush Limbaugh every day and rails against the "Death Tax" as being "unfair" - when in fact his parents have little over $200,000 in their estate, and the Federal Estate Tax will not even apply.

And that is where the complexity of the tax code can be a problem.   People don't want to bother to figure things out, so they make shit up.  And I see this all the time in the law.  Laymen will bend my ears for hours about their legal theories and how the law works.  When I tell them, as a Lawyer, the real deal, they shout me down.  "Some Lawyer you are!" they say, when I refuse to validate their wacky theories, "Everybody knows that...blah, blah, blah."

But having a strong opinion on something is not the same as making it reality.  It is sort of like these tax protesters, who believe that if they just believe strongly enough that the Federal Tax system is illegal, then they don't have to pay taxes.  And when the tax man cometh, with liens and garnishment, they act mystified.

The tax code could be simplified, of course, mostly by writing it in more simple language or by presenting it in a manner that is easier to understand.  And it would be helpful if Congress stopped using it as a carrot-and-stick to get us to build windmills or buy electric cars or - as in the past - 6,000lb.gas-guzzling diesel Suburbans.

But a flat tax?  Probably a non-starter.  But it illustrates exactly how stupid the "base" (aptly named) of the Republican Party is these days - people who think Michelle Bachman is Presidential timber.