The Last Crown Victoria - Why are Factory Workers Special? 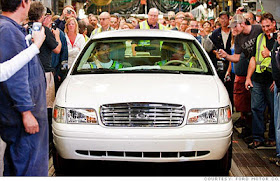 The last Ford Crown Victoria rolls off the line.


While I was in Canada, the CBC reported about a plant closing in Ontario.  Ford has finally retired its hoary old body-on-frame, rear-wheel-drive Crown Victoria, and is closing the plant, apparently for good.

What was interesting about the story was that the CBC reported it as yet another mean old company tossing workers out onto the street, with barely a penny to their names.

The local newspaper, on the other hand, noted that each worker was being offered free relocation to another plant, if they wanted, or a flat $100,000 payout.

Wow, talk about kicking them under the bus!

It does illustrate, however, how factory workers are treated differently than anyone in any other industry.  And it is curious as to why.

If you work for some law firm, and are laid off, chances are, you get shown the door.  No offers for relocation, no parting gifts or severance pay.  And in this legal job market, many lawyers are finding just that to be the case.

Of course, no one has sympathy for lawyers.  But consider the secretary working at the same firm.  Laid off, and likely with little or no severance benefits, except perhaps unemployment.  And in the modern office, secretarial skills are increasingly becoming as obsolete as the Crown Victoria.  In this age of e-mails and electronic documents, typing and filing are less and less valued skills.

Or take your typical unskilled worker at the local fast-food chain or local restaurant.  If they are laid off, it is "so long Charlie" and goodbye.  No one offers to relocate or pay them off.  And yet, they probably need it more than their overpaid brethren on the assembly line.

Or consider the small businessman who runs his own company - perhaps supplying bumper brackets to Ford for their Crown Vic?  He gets zero - and perhaps loses everything he has worked for, over his entire life.  Yea, that is the downside of "being your own boss" - losing it all.  And yet, most businesses end up doing just that - often in the first year of operation.

But for some reason, if you are a slug in a factory putting bolts on cars, you are a super-special person.  Not only do you get paid 2-3 times the average salary of equivalent workers on the outside, you have astounding benefits as well.  It is an odd conundrum.

And it really is hard to feel sorry for them, isn't it?
‹
›
Home
View web version