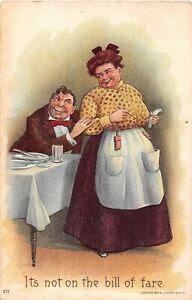 My waitress is forcing me to over-consume!


In another "water cooler chat" study ("Hey Bill, didya hear the latest...?") the "scientific journal" Environment and Behavior claims that the fatter the waitress, the more likely diners are to order more food and drink.

Their conclusion is that the fatness of the waitress gives the diners "permission" to over-consume.

Or... the entire "study" is bullshit.

Let's take a look at their "scientific sampling technique":

There are two obvious things wrong with this study.   First, their sample size is less than 500 people.   This is not so much a study as two people who wanted to be paid to dine out a lot - and just watched people eat and took notes.  The sample size is far too small to draw any dramatic conclusions.

Second, their study is not based on any hard data - the actual height and weight of the waitresses (weighed on a scale) was not measured.   No one reviewed actual copies of the restaurant "tickets" at the end of the shift to tally the exact amount of food and drink ordered.

Rather, they just sat there an estimated the Body Mass Index of the waitress based on her appearance and then estimated how much people were ordering based on observation in a noisy, crowded restaurant.

Blinding me with Science!

Like I said, someone probably gave them a research grant for this, and they just went out drinking and had a good time.   Where do I get in on this racket?

The value of such a study is zero.   It doesn't tell us anything about consumption patterns, public policy, health, or whatever.   The conclusions are flawed, the methodology is flawed, and it is just not science, period.

And even if this was valid data and valid conclusions, so what?  How does this help humanity?   Do we make it a policy that only slim waitresses can serve people?   Would that reduce over-consumption?

I doubt it, because I see a lot of fat people coming out of Hooters, and all their waitresses are pretty slim!

Oh wait, that's a "scientific study"!  Give me some grant money so I can do a more "in-depth" follow-up on breast size versus portions ordered.

(As you might expect, the "study" was done on a college campus - Cornell University, to be exact.  I suspect a couple of grad students had a ball, spending every evening down at Viva Taqueria at the commons, drinking beers and "doing research" - all in the name of science!   Looks like someone else is getting a worthless degree from Cornell!  Enjoy paying back those student loans!)
‹
›
Home
View web version