Why People Do Drugs 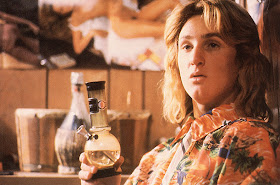 The War on Drugs will likely never be won, only because the people waging the war have no idea about why people do drugs in the first place.

To hear the "war on drugs" people tell the drug story, taking any kind of drug is a one-way ticket to the morgue.  And the only reason people would engage in such behavior is because of low self-esteem or some issues in their childhood or mental illness or some other defect in their lives or minds that causes them to do drugs.

The problem is, that is totally and utterly untrue.

The real reason people do drugs is.... because they make you feel good.  They are an incredible laff riot, or at least can be, at times.

(The same is true for sex.  People try to preach "abstinence before marriage" which pales in comparison to the incredible pleasure of an orgasm).

People seek out pleasure and avoid pain.  And at least initially, drugs seem to provide a lot of pleasure and little in the way of pain.   At least initially.  Like smoking, it may take years for the effects to be seen, perhaps a lifetime.   It depends on the drugs involved, the person, their health, and how much they do.

But that is the fundamental problem with the war on drugs.   The "just say no" people are fighting against incredible waves of pleasure and relaxation washing over your body.   Gee, that seems like a fair fight, no?

So the first time some kid lights up a joint, and feels relaxed and mellow and stoned, well, he starts to question his drug education at school.   If they were wrong about this, what else were they wrong about?   Maybe this meth thing needs to be looked into!

And that, of course, is one reason why our drug problem seems to have resurfaced in recent years, with new and more frightening drugs on the market - that are far more likely to harm you.

When I took "Health" class in New York State in 1972, they taught us about drugs, and were pretty honest about the differences between the different kinds of drugs.   Our teachers were not so much worried about pot as the harder drugs out there - amphetamines, cocaine, heroin.   That trifecta can really fuck you up, and in a real hurry, too.

Rather than the "Drugs are bad, M'kay?" approach to education, we were honestly taught about what these drugs were, what their effects are, and what the relative dangers were.

Today, I think, kids feel that all drug education is basically lies.  So if one drug is good, well another must be good as well.   There is little differentiation between them.   And hence you have a methamphetamine epidemic today when the drug has largely been eliminated from the market just a couple of decades ago.

This is not to say I am pro-drug.  Only that you have to understand why people do drugs.  People drink to relax, not to be self-destructive or because they hate life.   People smoke pot as it makes them feel better about themselves.   A teenager full of high school angst finds marijuana relaxing and calming.   No wonder they smoke it - the reality of high school today (or at any time) is harsh, particularly if you are an outcast.

The problem with pot, as I have noted before, is that while it provides this temporary relief from stress, over time it can have other effects.   I started to notice these effects in myself, my siblings, and my friends, and figured I had better get off the bandwagon before it was too late.

What sort of effects?  Well, lack of ambition, laziness, paranoia.  The "feel sorry for yourself" mentality and externalizing of problems.   Every time I went to a friend's house and sat on their bong-water soaked futon in their basement lair, I would be regaled with stories as to why their boss (or ex-boss) was an asshole, and why their girlfriend (more likely ex-girlfriend) was just a bitch - and so materialistic.   And of course Mom and Dad (in the living room above) were being such dicks just because he wrecked the family car.   You know, the usual sort of stoner shit.

I realized that I would have to change my life, if I wanted to be something more than that - and I didn't want to be living in my parent's basement well into my 30's.

But I also realized them - and realize now - that you can't tell a stoner anything and trying to explain my change of heart to my stoner friends was pointless.  They would never catch on, and moreover just reject what I had to say.   It was time to move on and find new friends (which I did, there are tons of people on this planet, the idea of being friendless is sort of stupid).

One friend of mine decided to be a stoner for life.  And thanks to Facebook (when I was briefly on it) I was able to connect back up with him.   We had not seen each other since college - where we both dropped out, thanks to booze and pot.   He asked me how I was doing, and I explained that I had gotten my Engineering degree, my law degree, and now had my own Patent practice and was living on an island off the Coast of Georgia.   Thirty years is a long time, and it is amazing what you can accomplish, given time and a little hard work.

My friend?  Well, he had moved back in with "Ma" and "Pa" and was complaining about how "Ma" was on his case for not putting gas in her car.  It was like we picked up the conversation right where we left it off in 1980.  He had been working slacker jobs or trying to get gigs with a band, for 30 years, working under the table.   He confessed at one point to living in an old school bus, in the winter, in Pennsylvania.  At that point his girlfriend left him.  Materialistic bitch!

The really sad thing was, after three decades, he had not a penny to his name, no savings, no IRA, no 401(k), no nothing.  And since he didn't work at legitimate jobs, he never did 40 quarters to qualify for Social Security when he retired.

Let me tell you, that was a sad and awkward conversation on the phone.   We both came from similar backgrounds and had similar opportunities.   But we made different choices along the way.   And marijuana was one of those choices.   Being a stoner for 30 years didn't pan out very well for him.

And I wish I could say his was an isolated case.  My other stoner friends (and family members) fared little better.  Lost jobs, lost spouses, lost opportunities.   And in every case, it was "someone else's fault!" always - always!

That kind of pain wasn't worth the transitional pleasure of marijuana - at least to me.  Sure, it was fun when you are a teenager and have loads of time on your hands.  But as an adult, well, as Daniel Tosh once said, "I'm not in 7th grade anymore and I've got shit to do!"

I think too, another reason I left "the lifestyle" was that I saw my friends going into harder drugs.   Despite claims that marijuana is not a "gateway drug" I saw many of my friends (the less smart ones) take the attitude that if marijuana is good, than maybe cocaine was better.  Or crack.  Or Opium (no really).  Or LSD.

And I guess that is the sad part.  You can educate people (or try to).  You can toss them in jail.   You can patrol the borders.   You can do whatever - and we've tried just about everything.   People are going to do drugs because they feel good and folks are not going to see the downside unless it is too late, or they figure it out on their own and quit.   You can talk to them until you are blue in the face and it won't work.

So I don't bother.   It is like religion.  You have to come to it yourself, otherwise you are just being indoctrinated into someone else's beliefs.

However, I do think the realistic aspect of my drug education in school in the 1970's was helpful, in that they tried to present an honest perspective and not merely indoctrinate us in a "Just Say No, Drugs are Bad" mantra.  Put honest information out there and fully inform people of what is really going on.   Because I think that is one reason I got out of it, was I saw friends getting into harder and harder drugs and ruining their lives in the process.  And I realized right then I had to say "adios" to the whole deal.

I think, too, that we need to acknowledge that the reason why people do drugs is because it feels so good to do so and that is a powerful incentive that is hard to overcome with mere words.   The idea that people who do drugs are somehow "damaged" or mentally ill or unhappy people is, to some extent, wrong.   And when we propagate this myth, it makes it harder to get out the real message and real truth about drugs - they do make you feel good in the short-term, but in the long-term they can be crippling in one way or another.

I think more honesty in the "War on Drugs" is the best answer.  Because the scare stories are just backfiring.