How to Get in the Paper or on TeeVee 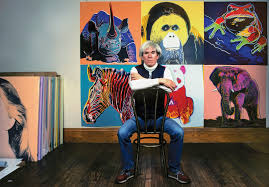 In the future, everyone will be famous for 15 minutes.


Recently, I was interviewed for another article that appeared in the "press".  Well, not so much the "press" as content providers which generate click-bait for online websites.   It was written by a young woman for "Market Watch" and picked up by MSN among others.

I say "another article" as I made a cameo appearance in the Wall Street Journal, a few months prior.  Neither article, of course, captured what I had meant to say and neither really told my life story, but rather what the author wanted to say, using me as a quote source, which is fine by me.

There is an old saying that you don't realize how inaccurate the press is, until they publish a story about a topic you are familiar with or that involves you.   Then you realize how wrong they get the details.   I see this every time a Patent story makes the news.  Not only do they get it all wrong, they routinely confuse Patents, Trademarks, and Copyrights, which is really an embarrassing error even for someone not versed in the profession.

This is not to say the press is bad or wrong, only that it is an inherent part of the process and the nature of the beast.   They have to prepare compelling stories that sell newspapers - or today generate clicks or eyeballs or Nielsen ratings.  And they have to do this on a very strict time deadline.   As I noted before, all news is fake news, to some extent - they are making a product for sale, not engaging in truth-telling.

The second time around, I was prepared, peppering the poor author with some quotable quotes.  I used my experience from the Syracuse Daily Orange and the Newhouse School style book.  I wrote that article for the Daily Orange back in 1985 because I was a little outraged that a Dean of Students would attempt to justify the school's lenient treatment of a convicted rapist on the grounds that "The football program brings in a lot of money to the school".   Today, it would be a different story, of course.  But that was back in 1985, and values were a little different (I imagine some are looking forward being "Great Again!" and going back to that standard).

The point is, and I did have one, when I sat down to write the article, the editor of the paper tore up my first draft as being a piece of crap, which no doubt it was.  "Punch it up with quotes!" he said.  I told him about the quote, "The football program brings in a lot of money to the school" - and he said to me, "Well, not that quote" as he didn't want to piss off the school.   He wanted quotes from the other students to make the story seem real and immediate.

Since I didn't have actual quotes from other people, he instructed me to make up quotes of stuff they more or less said.   I was a little shocked by this.

This is journalism.  They want something pithy and compact that gets the point across.  And journalists will fabricate quotes of what you said, based loosely on what you actually said.   It is pretty harmless fun, unless the author turns what you said on its head, which happens more often than you think.  But for the most part, this is the standard used by most journalists today.  So when you see something "in quotes" in an article, be a little skeptical that it was word-for-word what the person said.

Why do they do this?  Well, what they don't want is boring.  Boring doesn't sell newspapers, nor does it generate clicks or viewers.  They want something catchy, pithy, and direct.  They want characters not just ordinary people.  They want things larger-than-life.

Television works the same way, particularly in this age of "Reality" television.  I have received two e-mail queries from a casting director for a cable network (A&E, I think) looking for people to audition for a new show about "stingy" relatives.   It was a mass-mailing of course., not something directed at me in particular.   They wanted to get "characters" whose stingy habits annoyed family members - sometimes so stingy that they wasted money!

You can see where this is going.   Some cranky Dad yelling at the kids for leaving the refrigerator door open too long or whatever.   They want controversy and conflict, and hopefully someone who is "larger than life" like the Duck people or the New Jersey Shore "Boopie" or whatever her name is.

What they don't want is someone telling you not to buy all the crap advertised during the show and moreover, to put your money in your 401(k) before it is too fucking late.

So, if you want to be famous, be a character, be larger than life, have something to say -  preferably contrarian.  Doesn't matter if it is true or not, this is, after all television (or the media in general).   Besides they will edit what you say or do to make it seem more compelling.  That's how the system works.

But on the other hand, you can't want it too much.  That's a turn off.  Consider the Balloon Boy Dad.  He kept trying too hard to make a reality show, and it didn't take off.  I guess his family wasn't sufficiently bizarre or compelling.  The flop sweat was palpable.  So he comes up with this "balloon boy hoax" which Cable TV lapped up, because it was free.   Poor balloon boy Dad didn't make a penny from it.  He would have been better off bidding on storage lockers, quite frankly.

The image above is of Andy Warhol, who once opined that "In the future, everyone will be famous for 15 minutes".  He was, of course, ahead of his time - and neatly predicted the entire "Reality Television" genre with this quote.  He surrounded himself with famous and quasi-famous people who, like Edie Sedgewick, were mostly famous for being famous - the forerunners of today's "Celebrities" like the whozit sisters and their transgender Dad - famous for being famous and nothing else at all.

Poor Andy - he died too soon for Reality TeeVee.  He would have made one helluva star!
‹
›
Home
View web version