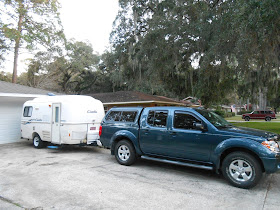 * * *
We are in our RV again, having a good time in New Orleans.   We are traveling with Mark's brother, who is somewhat new to the game, but has had RVs in the past.   People are often amazed that when we pull into a park, we back the RV in without a lot of fuss and shouting, and then in a carefully orchestrated ballet, have the entire thing set up, leveled, chocked and connected in a matter of minutes.  While others are still screaming at each other backing into a space, we have the awning and carpets out, the chairs arranged, and the cocktail shaker going.

How is this possible?   Well, early on, I realized, particularly after watching others, that most folks get to an RV park and then act like it is the first time they are there.  They back up into the site, while the spouse gives confusing hand signals or none at all.  There is much anguish and agony and shouting and carrying on doing what really should be a simple task.   Once the rig is half-assed in the site, the couple then wanders around in a daze as if they don't know what to do next.

We bought a small pair of walkie-talkies for a few dollars.  This avoids the shouting and carrying on which amuses fellow campers but does little for martial harmony or parking the rig.  We also have an idea of how we want to place the rig on the site ahead of time, and are not afraid to get out, walk the site and talk it over first.

We try to get it as level as possible side-to-side without blocking if possible.  Once it is in place, I put wheel chocks in front of the wheels and then drive forward while Mark puts chocks behind, effectively locking the trailer in place.  Chock, then block.   We learned this the hard way when I unhooked the trailer on a small incline once, and it started rolling downhill, with me grabbing the tongue jack and dragging my feet as it tried to run away.

Like I said, hard lessons, if you have to learn them firsthand.

Once the rig is set, I do the final leveling and disconnecting while Mark does the water, electric, and sewer as appropriate.   We learned early on that it is best if each person does a separate job, rather than trying to "help" each other - and just get in the others' way.   It becomes a rhythm and very painless and easy to do.

Hitching and unhitching are jobs that are best never interrupted.   I told Mark early on not to bother me when doing this, as if you forget one part of the process, you may find a camper that looks just like yours passing you on the roadway, sans tow vehicle.    So when the spouse says, "Gee honey, can you help me look for the spare bottle of ketchup?" while you are attaching tow chains, just say "NO" lest you forget where you are in the process - or just forget to finish the process, and end up in trouble.  And it pays to do it the same way every time - a series of tasks like a checklist.   You don't want to have your trailer half-hitched, trust me!

We've seen people do this, too.  A Canadian couple launched their Bon Air pop-up at Glimmerglass State Park when they forgot to latch the hitch.   They passed us leaving the park, driving too fast, and the trailer came undone and went rocketing off the side of the road, hit a mound of dirt, went airborne and took out a road sign before coming to rest.   Not only did they not latch the hitch, they had put brass hooks on their tow chains, which of course snapped right off.   They backed the Subaru into the ditch and yanked the Bon Air out and drove off like nothing happened.   I love the French Canadians - they have such a joie de vive or a sense of fate, perhaps due to their Catholic upbringing.   Like I said, they tend to view tow ratings as mere suggestions.

Another "hard lesson" was to turn off the water when you leave the rig.   RVs and boats have plastic plumbing and it can break when you are not around.   If the water is left on, you come back to a water-fall coming out the front door.  This happened to us twice, once in an RV and another time in a boat, and both times it was the water supply fitting on the toilet that failed.   Before hooking up water, or immediately after, it pays to check your faucets (and toilet) to be sure they are off.   Otherwise, you connect the water, turn it on, have a beer, and don't realize the kitchen sink is slowly filling with water, or worse yet, the toilet.  Again, another hard lesson.

These hard lessons of RVing were difficult to learn.   But they reflect the hard lessons we learn in life as well.   And sadly, many folks go through life refusing to learn or discounting these lessons.  People get into credit card debt problems and rather than learn from them, take on mantras like, "debt is normal" or "I'll always have a credit card debt" and the like.   Rather than learn from mistakes, they embrace mistakes as a way of living which can be disastrous.

It is hard enough to learn these lessons firsthand, even harder to learn them by watching others.   You try to warn people about the mishaps that can occur in life, but they don't see the urgency.   My brother-in-law doesn't understand how essential it is to shut off the water when you leave the camper for the day, and he likely won't understand this until he comes back one day and sees the water cascading down the steps.   It is human nature - we don't learn very easily except from direct experience - and even then, most of us live in denial.

The same is true for life.  If you get into certain habits, the risks of horrible things happening to you are far, far less.   For example, it is temping to roll stop signs or not use your turn signals because "no one is around".   But there ends up being a time someone is around that you don't see, and disaster strikes.   At the least, you get a ticket or wreck a car.  At worst, you kill someone.   Is it worth the risk to save a few seconds or to save the "labor" in turning on a turn signal?   For me, the answer is a clear "NO" and having good driving habits saves a lot of money on insurance in the long run - not to mention the risk of death and dismemberment on the road.

Good financial habits are the same way - but maybe even harder to follow.    Getting in the habit of reading labels and looking at prices, for example, can save a little bit with every purchase, which over time, adds up to a lot.   But you have to be in the habit.   In the past, we bought things like groceries without looking at prices.   We bought "brand name" products and didn't care whether they cost twice as much as store brand.   We had money - or so we thought - and looked at it as a status thing.  Only those "poor" people watched their spending!   Oh, how wrong we were!   People who don't mind their spending aren't poor yet, but if they are middle-class, they soon will be.   Even rich folks fall down from this poor habit - Michael Jackson and Johnny Depp are classic examples.

Today, we tend to look for the cheapest prices on things, and we didn't do that in the past.  We tend to also question whether we need things more.   Do we "deserve" a luxury car, or would we be happier with a cheaper car that burns regular gas?   The answer to me is clear.  The luxury car was no real luxury, just a lot of expense.

At a restaurant, we try to split an entree or order an appetizer as an entree.  You are not obligated to order a $20 entree with three sides and have $15 in drinks.   That's a week's worth of groceries to some folks, not to mention the calorie count involved.    We tend to eat out less as well, as we find it not only expensive, but many times just disappointing.   I don't mind paying hundreds of dollars for a really fine restaurant meal.  Sadly, in most cases, you spend a lot of money and the food and service is "ehhh."

Of course, this never ends.   We make financial mistakes which are akin to water flowing down the steps of the rig, and we learn a new lesson.  And often, like the overflowing sink, it can take a while for a little trickle of water - or a little trickle of spending - to make itself known.

And that will be the subject of my next post - looking back at categorized spending and seeing where "all the money goes".   It is kind of shocking.
‹
›
Home
View web version