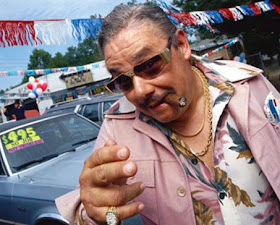 A used car from the original owner can be a good deal.  Unknown crap off a used car lot, not so much.

I have received a number of e-mails recently about buying used cars.  In several posts, I have repeated what a lot of "car guys" have said for years, that the best deal in a used car is a late model used car from the original owner.

This means a car "for sale by owner" about 1-5 years old, with all service records, being sold by the person who owned it - NOT from a used car dealer, a "curbstoner" (a guy who buys and sells cars on the side) or the third or fourth owner of a 10-year-old car.

For some reason, this common-sense advice gets twisted around to "used cars are ALWAYS a better deal!" or "I should buy a 15-year old Mercedes with 300,000 miles on it!" - which of course, is not what I said at all.

The low mileage, late model used cars for sale by owner are out there - but are not easy to find.  You have to look.  And it may not be possible to find the car you want or are looking for, at least right away.

It this is a generalization, not a hard and fast rule.   Used cars from a reputable used car dealer (such as some new car dealers or a chain such as Carmax) can sometimes be a good deal, but usually cost more - as evidenced by the price guides (NADA, KBB, Edmunds) which all show used car dealer prices to be 10-20% higher than "private party sale" prices.

And some types of cars are hard to find "for sale by owner" in good condition, because they are the kinds of cars bought by young men, "modded" and then beat to shit.   One problem with Jeeps and 4x4 pickups is that kids (and by kids, I mean these oversized children well into their 30's, usually young men) buy them new, put bozo tires and 8" lift kits and loud exhausts on them and then take them "off-roading" and usually break things.   Or "performance cars" that are modded with questionable aftermarket accessories and then beat upon.

These types of sellers think the "mods" they made make the car worth more than new and are unrealistic on pricing - and in fact are often not really even selling the car.   You know the type.  Back in my day, it was always the jerk with the Camaro with the perpetual "for sale" sign taped in the back window.  Yes, Mom's Berlinetta is a collectable - not many of those inline sixes with an automatic were made, in baby blue.

Like I said, the decent cars are hard to find, and if you can't find one, then you may have to move to plan B.   Buying a brand-new car is one alternative, but bear in mind the second you sign the papers on it, it is a USED CAR and worth about 10% less than the nanosecond before your pen hit the contract.   You take a big hit, so if you can find that two-year-old car with low miles, you can save a lot of dough.

Used cars from a dealer can be dicey.  The guy who offers "buy here, pay here" or "we repair bad credit" or whatever, should be avoided at all costs.  These are not car dealers, but just people who rip off the poor by selling them crappy cars for inflated prices at obscene interest rates.  New car dealers are a mixed bag.  As I noted before, the local "Monster Motors" offers shitty deals on overpriced used cars.   But other dealers I have visited (in more affluent areas) often want to "move iron" off the lot and will keep their best trades for sale.   You will pay more than in private party sale, but you won't get totally screwed as you would at Smilin' Bill's Used Car Lot and his weekly payment plan.

For example, when we bought the Nissan Frontier, we narrowed the selection down to that model (and trim level, SV) after looking at Fords, Chevies, Toyotas, etc.   That made it a lot easier to compare Frontiers to Frontiers, and quickly get a feel for what prices were reasonable and what condition to expect as normal.   We used the NADA guide, KBB, and Edmunds (and printed out the pricing pages as a guide) and set up a file.  We read reviews online. We scoured Autotrader, Craigslist, eBay, and whatever other places listed cars for sale new or used.  We visited several dealers and quickly realized that "small town" dealers were the worst of the lot, as they sold few cars and tried to extract maximum profits from each sale.   Sometimes you have to drive to the "volume" dealer in the big city, as they get kickbacks for selling more cars and thus can offer lower prices.  Most dealers make more on service than they do on sales, particularly warranty service.

We picked the Nissan because it was cheap and not as popular a the Toyota.  The Nissan dealers were dealing, the Toyota dealers thought they were selling gold bars.   And this is true for any popular car.  You want an SUV?  You will pay through the nose.  You want a 4-door sedan?  The salesman will beg you to buy it.  Of course, this can backfire on occasion.  Some cars are unpopular simply because they are pieces of crap.  Fiat-Chrysler is always offering amazing rebates and sales prices, simply because they make the worst quality cars sold in America, other than Mitsubishi.

We then we kept looking.  And looking.  2011, 2012, 2013.  We looked at these damn things for nearly three years.  We didn't need a new truck or a used one, so we were in a good position to look and not have to commit.  With each passing year, they added more options to the truck for the same purchase price.  And eventually, I got a call from a dealer who wanted to unload a truck at the end of the year, and since it was two-wheel-drive, there weren't a lot of takers for it (the kids all want 4x4 to look cool).   Since I had looked at over 20 of these trucks and had been monitoring the pricing on them since 2011, I was able to figure out he was asking a reasonable price and we pulled the trigger on it.

Reasonable price being the key.  Expecting to "win" in the car business is just a fantasy.  They are not going to give away a car, and you are not going to "pull a fast one" on the salesman.  Every time I hear a story from some old white guy on how he snookered the car salesman and "got a good deal" I can pick at the edges of the story and discover that he either fell for the inflated trade gag, gave his trade away, or was screwed on financing, or the teller of the story is basically lying and not reporting the actual sales price (with the $600 "dealer processing fee" of course!).

What do most people do?  They wander into a car dealer "just to look at the cars" and end up trading in their car and buying something they didn't even want, without checking prices or cross-shopping at all.   My neighbor went into the Volvo dealer to buy a convertible and came home  - eight long hours later - with a wagon.

And this is a shame, as in this day and age, with a few clicks of a mouse, you can research prices on any car, print out all sorts of data, and cross-shop deals online from a number of sources.  There are price guides, buying clubs, all sorts of tools at your disposal.   It takes some effort, to be sure, but not long ago, none of this data was available to the consumer.    Back in the day we had classified ads in the paper and maybe the "blue book" which a salesman might let you look at, or if you had a friend at the bank, he might let you sneak a peek.

So do the research.  Pick a car.   Cross-shop and think carefully.  Don't be afraid to walk away.  The last two cars we bought - the Nissan and the Hamster, I picked out the exact car I wanted, and negotiated a price over the phone, before I even went to look at the car.   Most folks do the opposite - they wander into a dealer with their checkbook and a pay stub, and say, "please Mr. Salesman, put me in this '08 Hupmobile!  I desperately need a car, as my trade-in caught fire on the way here!"

You laugh, this happened to a friend of mine, whose old SAAB burnt to a crisp in the dealer parking lot.   That didn't give him a lot of negotiating leverage with the salesmen at that point.  I think he ended up driving home in a Lincoln Mark VIII.  Another friend of mine bought a car when her trade-in seized its engine in front of the dealer.   Again, not a strategic place to be, in terms of negotiating power.

When I worked at GM, we were able to buy cars at "employee pricing" (Class A discount) every two years.   Many folks would buy a popular car, drive it for two years and then sell it for about what they paid for it to some third party.  In some cases, they had a friend who would agree to buy the car ahead of time, and even pick out the options and color.   Two years later, they get a lightly used car at a very advantageous price, while the employee got to drive for free.  Those sort of deals rarely work out for the rest of us, however.

Whatever you decide to do, do the research first and understand what is a "fair price" for the car you are looking at - and in order to do this, first pick out what car you want to get, before doing the research.   Don't just walk into a dealer and compare a Ford to a Chevy to a Toyota, as you'll be confused as all get out by the different levels of options and trim, as well as model years and prices.  Avoid used car dealers in poor neighborhoods or car dealers with come-on prices, weekly payments, re-leasing or weekly leasing, or giant inflatable monsters or mascots.

The best deals, and they are out there, are late model cars from individual sellers - people who actually owned the car and bought it new, and now want to unload it.   These are not easy or common deals to find, but they are out there and worth looking for, if you can find them.
‹
›
Home
View web version