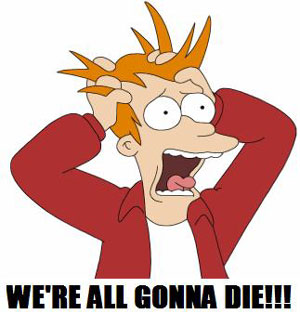 We're all going to die.  Every single one of us.


A friend was upset with me the other day.  "All you ever talk about is money and death!" she said.  Living on an island where the average age is 74 and climbing, where people are trying to get by on their life savings, it ain't hard to figure out why.   Every day the ambulance goes by, and like nervous cattle, we look to see it if stops at our house, and then have a brief sigh of relief, wondering who was the poor fellow who got it this time.

And you can't get away from this.  At the campground we are in, on Pine Island, the rescue squad came by.  We were out biking, and a very distraught man was on the cell phone, and asked us to tell the ambulance they went by his camper.  Seems his wife was having some sort of problem - they were there for hours, which isn't a good thing.   Poor guy - the survivors have it the worst. One of the campground employees confessed this happens several times a year at the campground, accelerating in recent years, as the population ages out.  We wonder if the next generation is going to fill in the spaces where these old folks once lived.  An older 5th wheel is for sale here, with aluminum screen porch attached, for $6000.   Cheap living, in retirement - if you have a similar trailer up North to go to during hurricane season.

The sad fact is, death is inevitable, and as I noted before, what gives meaning to life.    When we talk about investments and stock market returns, you always have to factor in death.   You are not investing for the long, long term - only until the end of your life.   So whether the market has done well since 1930 is kind of irrelevant - time frames of 90 years are beyond our investment horizon.  We have to look at the long term, the medium term, and the very, very short-term.

Some in politics and the media are resorting to shaming and damning techniques to call into question anyone who suggests or even hints that this Corona Virus thing is maybe a little overblown. No one wants to get sick and die, of course, but likely before this is over, hundreds of thousands of people will get this virus in the US and maybe thousands will die - mostly older people.  Sounds dramatic, until you realize that there are 330 Million people in the United States and the Corona Virus is barely a blip in the death statistics - even if thousands were to die.

About 40,000 people die in car crashes every year in the USA, and I can tell you firsthand that few of them are "taking precautions" in their driving.  They may be driving to the wholesale club to stock up on hand sanitizer and toilet paper (WTF?) but on the way there and back, they will take excessive risks with their lives - speeding, tailgating, rolling stop signs, running red lights, cutting corners, and generally driving like shit-bastards - texting no doubt, about their virus prep routine, while they risk the lives and limbs of everyone within crash distance of their SUV.

This is nothing new.  People freak out about an airliner crash and think that flying is dangerous - when the ride the to airport is far more deadly.  There have been years where no one died in an airline crash in the USA, while the same number - 40K - die in car crashes (1.25 Million worldwide) - and no one talks about quarantining automobiles (but now you know why the NHTSA has pushed for self-driving cars since the 1970's!).   There are people out there who still smoke, and yet no one talks about outlawing cigarettes.   People overeat and eat the worse sort of foods.  They drink too much.  And they drop like flies.  No one proposes quarantining the McDonalds.

The reason is simple.   In an airplane, we feel like we have no control over our fate.   Whether we live or die depends on whether the pilot and copilot have their shit together, or whether there is some hidden design flaw or maintenance problem with the airplane.  You hand yourself over to fate.  In a car, we deceive ourselves we are in control - we are steering and braking, and know the service history of our vehicle.  If it breaks down, we can pull over to the side of the road - or so we think.  Of course, we have no control over the red-light-runner who T-bones us at the intersection, or the fellow driving the wrong way on the Interstate.  We perceive we have control, so we feel less risk.  Both impressions, however, are wrong.

The same is true for the Corona Virus.   It seems to strike randomly, so we are afraid.   Smoking or over-eating, we can control and thus we think we can ameliorate risk.  But the reality is, you are far more likely to die from your bad habits within your control than from something random.   We think otherwise.

In a way, it is why cancer was so feared by our parents' generation (and indeed, still today).  It appears to strike randomly, have no cure, and waste people away.  My parents would cut ties with people who got cancer (or "the big C" as my Dad called it) as if it were contagious.   They were almost superstitious about it, and many in their generation felt that cancer was some sort of punishment from God for being a bad person or for unholy living.  Not much has changed.

A recent article about the panic buying of hand sanitizer, canned goods, and toilet paper illustrates the point.  The author points out that people feel they have no control over this situation, so they panic buy these staples.   They feel they are doing something and thus have control over the situation.  Again, it is likely they are living in a fool's paradise.

After 9/11, Dick Cheney got on television and told everyone that Saddam Hussein was going to drop a "dirty bomb" on Washington and that everyone should go out and buy plastic sheeting, duct tape, and survival supplies for the inevitable.   My friend who said I talk about nothing but "Money and Death" did just that - and today those supplies are still moldering in their basement.  We got on a plane and flew to our Condo in Florida.   Better to be shitfaced drunk when the attack comes, than cowering in a basement, waiting for a slow death from fallout.   But of course, the attack never came.

Politicians used 9/11 to advance their own goals - to the detriment of everyone else.  They used fear to get us onboard with a war in Iraq - and in in Afghanistan - that 20 years later, seem to have accomplished nothing.

And back then, the same shaming and damning techniques were used to call into question the patriotism of anyone who didn't go along with this.  Where's your duct tape and plastic?  What are you, a commie?

Once again, we are drawn into the vortex.   Politicians go on the television - which is happy to spread fear, because it improves ratings.   The idea of people locked in their homes for weeks on end with nothing to do but watch television has every network executive having a dry orgasm.   We are told that anyone who doesn't spread fear and panic is being irrational and irresponsible.  This worries me.

We are being told that there is only one way to think, and any dissent is shouted down.  This is never a healthy situation.  The reality that this virus will kill very few people - and most of them elderly and infirm - is downplayed and in fact, ignored.

But perhaps that is because the powers-that-be are all over 70, elderly and infirm.   If you look at the makeup of Congress, the Supreme Court, and the White House, maybe it all becomes clearer.   Because this virus could wipe out our entire government in a matter of weeks - as well as all the candidates running to replace them.