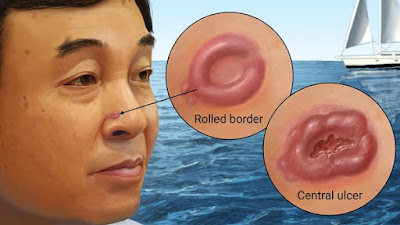 If you live long enough, you will get some form of cancer.  Fortunately, some are somewhat preventable, and others are relatively benign.

I am typing this on my laptop at the surgery center where Mr. See is having a chunk of his ear lopped off.  He has very fair skin (Gingers!) and noticed a growth on his ear that would not heal.  At our annual checkup, the doctor looked at it and made an appointment with our skin doctor (who said there were no appointments for two months!) and somehow got us in.

They scraped off a chunk of the thing on his ear and did a biopsy and called back a few days later - bad news, sort of, basal cell carcinoma.   Apparently this is a common thing for anyone who spends any amount of time in the sun.  A friend of ours has had several of these things hacked off over the years. Again, the advantage of living on Old People's Island is no matter what ailment you have, some oldster will tell you they had it twice as bad - and had to walk to school, six miles uphill each way, in the snow, even in June.

What they are going to do - and it takes hours, hence I bought my laptop - is cut off a chunk of this growth and then do a slide of it and look under a microscope and see if there is any carcinoma in it.  If so, they keep "digging" so to speak, until the slides come up clean.  It could take only one or two cuts, or maybe more.  So it takes time to do.

And likely, over time, we will have to come back to this place to have other growths chopped off.  The waiting room is full of old people with weird scars on their noses and scabs on their arms.  Getting old ain't for sissies.

Can this sort of thing be prevented?  In part, yes, by using sunscreen, wearing long-sleeve shirts, big hats, and staying out of the sun when possible.   When we were kids, they didn't have "SPF" numbers on suntan oil (as they called it) or "tanning butter" - in fact, it seemed that these products were designed to enhance sunburn rather than prevent it.  And of course, as kids, we weren't really slathered with product very much - and no one bothered to give us sunglasses to wear.

The last item still irks me as I see today, young parents at the beach with dark Ray-Bans on, but their kids are squinting in the blazing sunlight, slowly destroying their eyesight while the parents frolic and play. If you need sunglasses, your kids do, too. I guess I can forgive my parents' ignorance as sunglasses for kids wasn't a "thing" back then.  Although you would think that after seeing us in so many family photos and home movies, red as lobsters and squinting into the sunlight, they would have caught on.  But they didn't, and childhood was marked by unpleasant trips to the beach with blistering sunburns and blinding light.   And you wonder why kids get fussy!

There are, of course, many other forms of cancer, some very serious and some not.   If you are a male and live long enough, apparently you will get prostate cancer.  They no longer test for this by putting a finger up your butt, but rather using a PSA blood test.  If the PSA level is high, then I guess they do a biopsy. Some folks have the prostrate removed, which can lead to sexual dysfunction and even incontinence (as happened to one friend of mine).  I had a relative get this and get all dramatic about it - "I have cancer!" he said.  But the reality is, he will die of old age before prostate cancer kills him.

My Dad went through something similar with some kind of slow-growing blood cancer.  He lived to be 93 years old and from what I understand, this cancer didn't kill him.

Others are not so lucky.  A neighbor of ours in Pompano Beach was diagnosed with pancreatic cancer - and aggressive cancer that kills people in a matter of weeks or months.  He spent the last few months of his life in hospitals, desperately looking for a cure and feeling like crap.  Myself, I think I would find a doctor who would prescribe "hospice care" and massive doses of oxycontin and then try to enjoy the remaining weeks.   Then again, I am reading that they have new treatments for even pancreatic cancer and who knows?  Maybe there will be a cure for this in the near future.

Cancer treatments have advanced a lot in recent years.  My late sister, who died of breast cancer, fought it for two decades.  Toward the end, she went to see a specialist in Denver who noted that had she had access to the treatments they have today, when she was first diagnosed in the 1980's, she would likely have been cured.  The odd thing about breast cancer is that there was an "epidemic" of it in the 1980's and 1990's and then it started tapering off and no one seems to curious as to why this is.  Was it all that pot-smoking my sister's generation did?  Or was it the early birth control pills that she took?  Both have had links to breast cancer, but like I said, not many people seem curious as to why a cancer takes off like that and then declines.  And no, "testing" doesn't create cancers - it only monitors them.

With any luck, Mr. See will emerge largely unscathed, with only a nibble of his ear removed.  I keep joking that if they pierce it, I will buy him a gold ring to put in the hole.   But likely, this will be a recurring thing over time.  And I wonder whether this means our daylong trips to the beach (which we do less and less of) will curtail over time.  We used to have three convertibles, and back in the day, our dermatologist told us "Sell them!" as he thought they were basically cancer machines.

But we're keeping a good thought.  Like I said, our neighbor said it was no big deal - you just go back every year for a checkup and maybe every other year to have something gouged out.   It could be a lot worse.

Our doctor's father was the artist who drew the "Joe Palooka" and "Rex Morgan, M.D." comics - so there is plenty to read in the waiting room.

UPDATE:  Three scoops and we're back in business.  Stitches come out on Thursday.