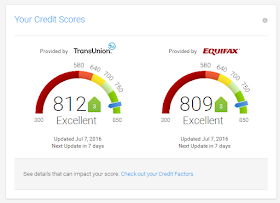 Does it make sense to keep old credit accounts open to improve your credit score?   Not really.

There is a lot of mythology out there about credit reports and credit scores.   People will tell you they can improve your credit report or credit score as if it was some sort of cosmetic thing not based on your actual behavior.

Usually these sorts of folks are after your money.   And it is sort of sad how poor people will hand them over tons of money and often absolutely destroy their credit ratings by going to an agency that promises to "fix their credit".   Some of these places actually tell you to stop paying your bills and instead give the money to them and that they will "negotiate" with the lenders to lower your debts and remove negative reports from your credit.   Of course, lenders are not idiots and they don't go along with these schemes, so the borrower ends up bankrupt and further in debt.   Preying on the poor, what's not to like?

The local car dealer promises "credit amnesty" for low-score borrowers.   But of course "amnesty" only means paying horrific interest rates on a car loan - payments so high that default and repossession are almost guaranteed.   Again, the borrower is left broke and destitute and in worse shape than before he was granted "amnesty."

When someone tells you something too-good-to-be-true, it usually is.

Financial sites and discussion groups are full of "advice" on how to "game your credit score" to bring it up a few points.  Some of these techniques work, most are merely urban legends.   Some work, but only bring your score up a few points - which might be helpful if you are at 768 and want to make the vaunted 770 which qualifies you for all the better credit offers.    Others might work, but since you can't change the data on your report that easily, they don't really provide any meaningful help, unless you had a time machine and could go back and change your behavior in the past.

It is true that average length of your open credit accounts is one factor in determining your credit score.   But it is not a dominant factor.   If you have a 20-year average of open accounts, that's a fine thing, but if you are delinquent on your payments, it will wipe out that advantage in short order.   One late payment on a mortgage is all it takes to tank your credit score.  If you declared bankruptcy, it really doesn't matter than you have an open account from 1979. 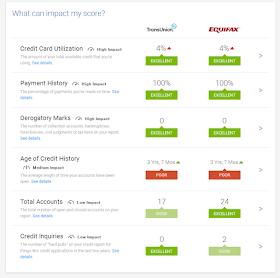 Average age of credit history is only one factor - and arguably the least important - in determining your credit score.  (Click to enlarge)

You can see why this factor is used.   If someone stays in the same house and pays on the same mortgage for 20 years, their average age of credit will be very high.   This tends to show a stable person who stays in the same place for a long time and has long-term credit relations.   It is one indicia of stability in a borrower.

But credit scores are not an exact science.   And that is why this factor is just one of many factors, and really not a major one.  And as the images above illustrate, your credit score is really not affected all that much by average length of open accounts.  It is possible to have a score well over 800 even if your "average age" of credit is low.

What is really astounding of course, is that credit score can be a really, really poor indication of someone's credit-worthiness.   Since I am largely debt-free at this stage in my life, you would think I would have a perfect credit score.   However, since I am not borrowing money anymore, the system doesn't know what to think of me.   I have no mortgage - so I must be renting, right?   And since I don't have lots of open credit accounts from years gone by, I must be a poor risk, right?

As the image above illustrates, the holy trinity of credit score is (in no particular order) credit card utilization, payment history, and derogatory remarks.  If your credit card utilization (percentage of balance to balance limit) is high, odds are you are living paycheck-to-paycheck and not paying off the balance every month.   If your payment history is spotty (late payments) then odds are you are on the brink of a full-blown credit card crises.   If you have derogatory remarks on the report (bad debt, late payments, and so on) well, you've gone over the edge.

These indicia are based more on your financial solvency than anything else, and there isn't really much you can do to change them, with some exceptions.

With regard to credit cards, I try to pay off any credit card debt before the payment is actually due and thus keep my balance low in relation to the credit limit (and I abhor having high-limit cards as they can be a lethal trap).    So you can "game your score" a bit by making multiple payments every month and thus keep your balance/limit ratio low, raising this factor.

Payment history and derogatory comments is harder to parse.   If you've really been delinquent on your payments, there isn't much you can do to fix this.   But sometimes spurious data appears on your report and it can be fixed with just a phone call or a letter.  Two examples come to mind.

When we obtained our first mortgage together, it turned out that Mark had a "sent to collections" comment on his credit report.   It seems when he left college, his drug-addled roommates had promised to pay the last phone bill (this in the ear of land-lines and before credit scores existed) and have the phone disconnected.   They did neither.

So the phone company kept sending bills until they pulled the plug on the phone.   Since the bill went to a now-empty apartment, Mark never got it.  And the total amount was about $230 as I recall.   The mortgage broker indicated this was not helping our credit report.   I called the phone company, explained the situation, and then wrote them a letter with a check for the full amount and a month later the derogatory data was removed from the report.

In a second instance, I had a late mortgage payment reported on my credit.   We had a mortgage through a local bank (Riggs) which in turn sold it to Key Bank.  I had just signed up for auto-pay on the mortgage, thinking this would prevent any late payments.  But just as I signed up they sold the note to Key Bank and then the next month's payment was marked "late" as it took more than a month for the auto-payment to be forwarded.  Again, a phone call solved the problem.   The operator at the company (whose name was Bell, oddly enough) checked the records and apologized and removed the negative data from my report.   It does take a few weeks to a month for this correction to appear, though.

I am told that since those days, most mortgage companies will not report late payments when a mortgage is sold because of the possibility of payments being mailed to the wrong address or electronic payments being forwarded late to the new lender.   This is not an excuse to make a late payment intentionally, though.   As I found out the hard way, a late mortgage payment will "tank" your credit score in short order.  Of the "holy trinity" a late mortgage payment is the ultimate sin.

Now, on the other hand, if you have been late on your credit card payments for the last two years, a phone call or a letter to the company isn't going to fix things.   They have no reason to correct data that is correct already.  So the idea that you can "fix" a shitty credit report when the shittiness is your own damn fault, is flawed.   The idea that you can pay someone to do this is also flawed.

Will keeping your oldest line of credit open increase your score?   Again, maybe, a few points.   But again, it is a "time machine" piece of advice.   If you've already closed those accounts, what's the point of the advice?

Also, I think you should base your financial behavior on sound financial practices, rather than gaming a credit score.   I closed my Sears account (which I opened in 1981, as I recall) simply because I was no longer using it.   The idea of a dormant account floating around with bills being send to previous addresses frankly scared me to death.   And it is interesting how they handled credit accounts back in the day.   I was buying a DieHard battery there once and the clerk asked me if I had an account with them.  I said, "Oh, yea, years ago, but I closed it."    He asked for my driver's license, typed in a few commands and said, "Oh, your account is still active, and I can put this battery purchase on it right now!"  Even without the "charge plate" I could still charge on the account.   This struck me as kind of dangerous, so I closed the account.   Besides, I don't need to finance a battery anymore.

Making your finances more complicated than they need to be is never a good idea in my opinion.  Doing so to "game" your credit score is, in my opinion, totally idiotic.   I have a good credit score simply because I don't need credit anymore.   That is how it works - to get a loan you first have to prove you don't need the money.   It is an old joke, but a truism nevertheless.

Of course, today, credit scores are a big deal.  They can determine whether you get a job, a house, a car, or even a spouse.   Not long ago, credit scores didn't even exist.   But today, at least, we can readily view these online, as a free service from our Credit Card provider, through CreditKarma (which will make you all sorts of shitty credit offers) or the like.   You can view your actual report, of course, through annualcreditreport.com which is the only really free legitimate government-sanctioned credit reporting site.

In the last few years, the credit industry had just let its pants down and let everyone see their credit score through a number of means.   Paying money (such as through Soozie's "FICA Score Kit!") to see your score is kind of dumb these days.   So it is a good thing that consumers at least can see how they are being evaluated and why.   And the reason the industry didn't want us to see these scores and data was that they were concerned that people would try to "game" their scores, which you sort of can do, at least a few points one way or another.