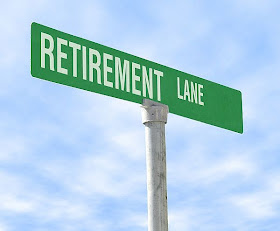 Deciding when to retire isn't easy - if you even get to make the decision yourself.   But then again, most decisions in life are hard, and making hard decisions is often the right choice.

First of all, thanks for all the e-mails and messages asking where I have been.  I don't have time to respond to every e-mail I receive, so my apologies for not responding.

In response to my retirement posting, I received some interesting messages.  One fellow told me that retiring early was a mistake as I would have "nothing to look forward to except death" which was hard to parse.   I guess if you keep working you never die and that is a good reason to keep working?

Others were generally supportive, but wondered what on earth I would do to keep busy?  After all, without work, I would be "bored to death".    Well, so far, no boredom or death just yet.

I have spend the last two weeks camping on the Blue Ridge Parkway and traveling in the Central New York Finger Lakes region.  We are headed to the Adirondacks, then to Montreal, Vermont, Maine, and then back down through Cape Cod, Virginia, and the Blue Ridge again.  It may take a few months.   Oh, and it is as boring as all get-out.   Not really.

It is interesting traveling in that people ask you where you are from and where you are going.  When you start to rattle of a list of destinations, they get upset.  After all, the point of "vacation" is to spend a week traveling from point A to point B and then a second week traveling back.   You have to have a "destination" and a time limit.   It is funny to watch people's brains melt down when you try to explain to them that working all day long isn't necessarily a requirement in life.

But the guy I am talking to has a new 35' Fifth wheel, bass boat, jet ski, and monster truck - all parked in the campground - and is still making payments on all of it.  He has to get back to work to pay for it all, so he can use it for two weeks of the year.  He laughs at my tiny camper which is "paid-for" and doesn't understand that there is another way to live.   He might, eventually, if he can retire.  But sadly, the line of payments he has will stretch well into his 60's (and let's not talk about the mortgage!).

And I do marvel at these folks who have so much "stuff" and yet appear so young.   I mean, how can a 30-year-old afford a $65,000 pickup truck?  And the answer is, only a 30-year-old can.   Old people, having to live on a fixed income, are often forced to eschew such nonsense or risk going broke or running out of money.   It is like the States - they have to balance their budgets, while the Federal Government can engage in deficit spending, at least for a while.

Anyway, once again I digress.   One reason we are in Central New York is to look at boats.  Yes, boats again.   We were thinking that after taking the Casita to Alaska in 2017 (aboard a ferry from Seattle to Anchorage along the inside passage) it will be 20 years old and pretty wrung out.   We might sell it and buy a used cabin cruiser and cruise the Erie canal, the finger lakes (Seneca and Cayuga anyway), the thousand islands (St. Lawrence river), lake Champlain, and the Hudson.   There is a lot to explore here by water, and it is a lot cheaper than owning a vacation home!

It is an idea, anyway, and we are still in the infant research stages, looking at boats, places to go, places to stay and the costs involved.  We might nix the whole idea and do something else.   The nice thing is, a fresh water boat up here can be in very good shape and for not a lot of money.   In fact, we likely would spend more on fuel than on the boat itself, over a period of years.  We might decide it isn't worth it, though.

But speaking of decisions, the point of this blog entry was about the decision to retire.  One reason I decided to retire is that I no longer enjoy my work as much (another posting about that later) as it seems the Patent system has sort of gone off the rails.  People who actually invent things make no money from their inventions, while others with "paper Patents" and clever lawyers can rake in millions.   Attempts to fix this problem over the years have only made it worse - the solo inventor is really screwed today, while the trolls march on.  The only real function served by the system is to arbitrate disputes between giant multinationals, and even then, the result is often a tie.   But more about that later.

Also, I find as I get older, it seems my anxiety levels are higher.   I am not sure if this is just part of getting older and more conservative (risk-taking is a young man's game) or something else.   Either way, the anxiety of work is outweighing the enjoyment of it.

I look back at times in my life when I made momentous decisions and wonder who that person was.   I had a lot of balls back then, it seems in retrospect, to go to college for 14 years and get other people to pay for it.   To go to law school and get a job with a firm and prosper - only to chuck it all in a few short years and actually start my own law practice.   What the heck was I thinking?   That's far too much a risk to take!

And then to get into Real Estate and buy properties and fix them up and rent them - the risk of being a landlord is far to scary to me today (although technically, I still am one, for one remaining property).   Borrowing hundreds of thousands of dollars - well over a million in fact - to speculate on the market.  It could have gone horribly wrong, and in fact did for many Americans.   And then the decision to sell out when the market was at its peak - and move to the country.  What was I thinking?

I feel that today, I can't make such decisions as they make me too anxious.   But then I think again - I just made what is arguably the ballsiest decision of my life - to retire early.   So maybe I haven't lost my touch just yet.   And over the years, I have found that the decisions based on "gut instinct" that seem irrational to others are often the best decisions I have made.   Time will tell if early retirement is one of them.  In the meantime, I am enjoying the shit out of it.