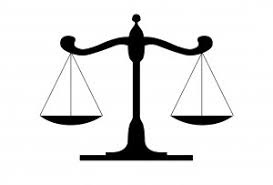 Justice depends on a lot more than the law and the facts.

When I was younger, I was like most young men - in a real hurry to go nowhere.  I wanted to buy lots of stuff and spend money as fast as I could earn it - and then borrow a dollar more!  And of course, I wanted sex, drugs, and rock-n-roll.   It never dawned on me that it was sort of a dead-end lifestyle, quite literally.

So I drove like a maniac, and one weekend, I got three tickets - two for speeding and one for rolling a stop sign, on my motorcycle no less.  I guess I had a death wish.  Needless to say, my insurance rates were already murder, three tickets would put them over the edge- if not result in my license being suspended.

I told my tale of self-inflicted woe to a friend at work, and he said to me, "Oh, you need to call [name redacted] - he can fix it for you! " And he called this attorney and introduced me.  We made an appointment to meet after work at his office in the State Tower Building in Syracuse. I have redacted his name, because his son has the same name and is still practicing law, probably in the same office.

So I went to his office in the creaky old State Tower Building, which was a relic of 1940's post-deco architecture.  Mr. [name redacted] was at least 70, although everyone looks old to a 23-year-old.  He looked at the tickets and said, "Onondaga county!  I might be able to help you."  He buzzed his intercom for his secretary and said, "Get me the District Attorney!"

The DA apologized for not taking his call - he said his secretary was new and didn't understand. Attorney [name redacted] explained that he had a "young man" in his office who made some mistakes, but was a good kid, going to college and working at Carrier (and in a company town, working for the company helps!) and these tickets would raise his insurance rates even further and possibly cause his license to be suspended.

They talked a bit and then he hung up.  "It's all taken care of!" he said.  And I asked, "When do we go to court?" and he replied, "Oh, we're not going to court."  The DA decided to Null Pros the case and make it all go away.  I was staggered.

Why did the DA do this?  As [name redacted] explained, when the DA graduated from law school, [name redacted] gave him his first job and trained him as an attorney.  Now that [name redacted] was elderly and no longer doing major legal work, he just showed up once in a while at his office and fixed tickets and such, using his connections he made over 40 years in practice.  His son was practicing with him, and he handled the more difficult legal matters. He is still practicing today, which is why I call his dad [name redacted].

Total cost?  $500 - a lot of money for me at the time, but a fraction of what I would have paid just in the first year of increased insurance costs.   So it was a real bargain.  And it was an eye-opener to a naive 23-year-old as to how the world really works, as opposed as to how it was supposed to work.

Given this "second chance" to turn my life around, you would think I would have slowed down and straightened up a bit, but of course not. I ended up getting another ticket and I tried again to have [name redacted] fix it, but there wasn't much he could do, other than to reduce the offense slightly.  My insurance rates were murder.  [name redacted] told me to slow down and drive the speed limit, for chrissakes, but it would take me another 20 years to learn that lesson.  From what I see on the roads, my experience seems typical - any male under 45 years old drives like a jackass.  Some women, too - and some folks over 45

Some people never learn, and when they get caught it is always someone else's fault, right?  Those greedy cops, just raising money for the town!  Never mind the fact that it takes two hours or so for the cop to set up a speed trap, pull you over, writre a ticket, and then process all the paperwork. With all that overhead, the town isn't "making money" on speeding tickets.  At best they are breaking even. Hell, factor in health insurance, retirement plans, and the cost of running all those cop cars, they are losing money, big time. But tell that to an externalizer.  Everything is someone else's fault.

But I digress.  I learned, over time, that speed limits exist for reasons - very good reasons.  And I realized that wrecking a car was expensive and could kill you - or worse, leave you maimed for life and in constant pain.  And for what?  To get to Taco Bell three seconds sooner?  People are morons, and I was a moron - still am, half the time.

But that experience told me more about the law and our society and how things actually work.  People of a certain social status and race do get advantages - don't think for a moment it isn't true. If I was black and working at some manual labor job, odds are I would not have gotten the same treatment as [name redacted] afforded me.  In fact, I would probably have been jailed.

As as other experiences in my life illustrated, there is corruption in any society, even a society that is founded on principles of fair play, justice, and equal protection for all.  This is not to say we should give up, but only to try harder to improve.  Because in other forms of government, often the corruption is far worse - who you know trumps everything, and justice is doled out based on how much of it you can afford.  In fact, most of the rest of the world operates on that principle.  Sadly, it seems we are sliding back to that model more and more, and some folks are actively cheering it on.

So, how do you fight a traffic ticket?  You really can't.  You can call the DA's office and try to talk them into reducing the charges to something that puts fewer or no points on your license.  If you make them go to court, they have to spend time (which is money) prosecuting the case, and the officer has to show up to testify (half the time, they don't, as they are busy, and the case gets tossed) - so you have some leverage there.  On the other hand, if  you fight the ticket, they have every incentive to "make an example" of you, so others don't follow the same path.  Hiring a lawyer might help - although many just take your money - a lot more than $500 - and do little or nothing, or nothing you can't do yourself.

But really, the easiest way to fight a ticket is to not get one in the first place, and this is ridiculously easy to do.  If the sign says "Speed Limit 55" then drive 55.  Going 65 isn't going to make a big difference in your arrival time, and since you are overdriving the roadway, you are far more likely to collide with some grandma pulling out of their driveway.  And that is why they have the limit in the first place - so other people can safely merge with traffic.  Traffic jams and other disruptions are not caused by people driving too slowly, but by one jackass driving too fast, weaving in-and-out of traffic and causing others to jam on their brakes.

Just slow the fuck down.  How hard is that?