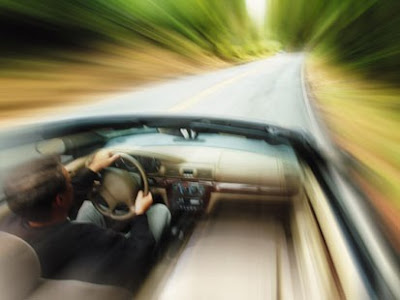 Going Real Fast is fun, but also expensive, in more ways than one.
When I was much younger, I used to love to go as fast as possible everywhere. Like most young people, once in the car, I hammered the throttle. Young people tend to do this, which is one reason they have such high insurance rates.

My parents, though, were also ratchet-foots. My Dad kept getting speeding tickets and my Mother thought the speed limit signs were mere suggestions. Actually, they were both horrible drivers - speeding, tailgating, you-name-it. We learn what we are taught.

Like most young kids, after I got a few tickets, my insurance rates shot up. That's the problem with speeding. Not only do you have to pay the fines, which are usually pretty small, but if you are young you can end up paying thousands of dollars a year in insurance premiums, even to insure a basic small car.

After three tickets, they sent me to defensive driving school. It was a revelation. I had gone to Driver's Ed in high school, but much of that was learning where the pedals were and how to turn the wheel. The instructors played gruesome "scared straight" films, showing gory accident scenes. But these were like the anti-drug films - more advertisement than anything.

In terms of teaching defensive driving, and also WHY we have speed limits and what to watch for, Driver's Ed was a washout. Defensive driving was a good course - it taught you how to go WITH the flow of traffic, instead of trying to fight it and make things worse (as most people do).

You see, speed limits don't exist for no reason at all. They are not there just to create "speed traps". Rather, when you come to a congested area - one with many driveways, cross-streets, parked cars, pedestrians, etc., you have to slow down in order to preserve your reaction time.

People do stupid things. And if someone pulls out in front of you when you are doing 35 mph, you can slam on your brakes and stop -and avoid an accident. But at 55, you'll likely collide and probably hurt someone.

OK,OK, you say, you understand that. But what about highway speed limits? Well they are usually set based on the condition of the highway and also the maneuvering room you have. In any highway, you want to have options, should something bad happen in front of you - a broad shoulder, and maybe some "run-off" space nearby. Highways in urban areas and those surrounded by trees provide little escape options if you have to avoid an accident in a hurry. So usually, those types of areas have lower limits.

Now back in the 1970's they lowered the speed limit to 55 mph save gas. And it made little sense and no one obeyed the law. This created a prohibition-effect, where so many people were flouting the law that the law became a joke. As a result, people lose respect for the law and for law enforcement.

The speed limits today, which can go as high as 75-80 mph in some areas, are more than reasonable, given the condition of American roads and American driving skills (and the condition of our cars). Yes, in Germany, you can go on the Autobahn and have no speed limit. But the roads are different over there, as are the drivers and the cars. And guess what? They are talking about putting speed limits on the Autobahn as traffic has increased.

All the car magazines (which are pretty juvenile and usually published by the same publisher) like to play "Rebel without a Clue" in their opposition to speed limits, as it sells well with the readers and also with the advertisers, who are selling radar detector equipment and other gadgets to help you evade a speeding ticket.

But really, to avoid a ticket, all you have to do is obey the limit -or even stay fairly close to it. And it really isn't all that hard, onerous, or inconvenient.

We used to own a motorhome that, foot to the floor, did 65 mph. As a result, we spent a lot of time in the right lane, chugging along. We would see young men, usually in what they thought were fancy cars (but were often just reworked economy cars) fly by at 80 mph or more.

So the stressed-out speeder stops often, to relax, to get fuel, to get refreshed. Meanwhile, our old motorhome, chugging along at a speed not too different, passes him by. He gets back in his car and floors it and "Gee whiz! I have to pass that damn motorhome again!"

Here's the deal: If you are going 65 mph in a 65 zone, you cover 100 miles in about an hour an a half. At 75 miles an hour, you might save about 15 minutes. At 80 miles per hour, maybe 20. If you are driving a few hundred miles a day, you might save an hour or so, provided you do not stop more often - and this assumes you maintain a constant speed, and are not slowing down for traffic.

For local traffic, the time savings are even worse. If you are driving 30 miles from one town to another and the speed limit is 45, you'll get there in 40 minutes. If you go 60, which is well over the limit and likely to get you a ticket, you'll save a whopping 10 minutes. Miss a traffic light or two and you save no time at all.

And that brings up another point. If the traffic is going 65 mph to 70 mph and you want to weave in and out doing 80, all you are doing is just pissing every one off and making an ass of yourself.

In addition to gas mileage, the wear on your brakes and driveline will be more than double that of an ordinary driver. Stopping a car from 30 mph uses a lot less brake pad than slamming on your brakes on the Interstate to go from 70 to 55 when a truck pulls out in front of you.

So the costs, in terms of speeding tickets, staggering insurance bills, gas mileage, and wear and tear on your car is pretty impressive.

But the specter of an accident makes those costs pale in comparison. Yea, yea, I've heard it before - you've "never" gotten into an accident. Well, there was that deer you hit, but that doesn't count, right? Oh, yea, and that lady who pulled out in front of you and you couldn't stop in time (because you were speeding) and that asshole cop gave YOU the ticket, when it clearly was her fault, right? Yea, other than that, your driving record is clean.

Car magazine columnists like to make asinine pronouncements like "Speed doesn't kill, speed differential kills!" And they are right of course. If you are doing 70 and a bridge abutment is doing 0, the differential will surely kill you. But more importantly, if you are the one weaving in and out of traffic trying to "make time", you are the one disturbing the flow of traffic. It is the differential between your speed and everyone else's that is causing the problem.

Back in the days of the 55 mph speed limit, maybe such arguments made sense - on highways where everyone was driving 65 or greater, driving at or near the speed limit could be dangerous. But those laws have been repealed.

And funny thing, too. When I am driving in a 70 mph zone, I find that many people don't even drive the speed limit. Many lose their comfort level at about 65 mph. So even given the opportunity to go 70 -80 mph legally, many don't.

You have to drive defensively. And that means going with the flow and anticipating the other fellow doing something stupid - and leaving yourself time and space to avoid his stupidity.

Of course some will cry, "Well, what's the fun in that?" Well, if you have a sports car, there are times and places you can "open it up". In city traffic or on a crowded highway aren't some of them. In fact, there are fewer and fewer places you can responsibly drive fast anymore. Most county roads have deep ditches (4 feet or more) and agricultural equipment lurking around the next bend. And then there are the deer...

Want to go fast? Go to the track. Most tracks will let you take a few laps for a few dollars. But beware, your insurance doesn't cover you on the track - you wreck it, you bought it. And after even one lap, you may discover you are not the race car driver you thought you were. If you are serious, join a car club and take a driving school. But bear in mind that that sort of driving wears on a car.

I'm older now and driver more carefully and more slowly. My insurance, for five cars, including four BMWs, (three convertibles) is less than $1000 a year. Your insurance can be much lower too, if you have a clean license. Driving fast to impress people or get somewhere "faster" is a silly reason to pay tens of thousands of dollars more (over the years) in insurance costs.

And guess what? No one is impressed you can crank you Hyundai up to 80. And you aren't getting anywhere faster than anyone else.

It is a loser's game. And you can save a boatload of money by not playing it.
Newer Post Older Post Home