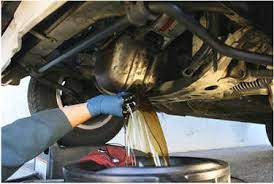 On any automotive website or discussion group, one sure way to start an argument is to ask the apparently innocent question, "How often do you change your oil, and what brand and type do your recommend?"

The resulting flame war will last for months, as each person asserts that their choices are the one and only "correct" way to go about it.

The reality is, however, that cars and oils have changed over the years, and advice that made sense in 1965 is no longer applicable today. Oil companies and oil change operations have a vested interest in getting you to change your oil more often than less. So reliable information is hard to come by.

Now please don't take this the wrong way. I am not advocating automotive abuse or validating your neglect of your car. Changing your car's oil (and other fluids) is essential to long life and reliability. Many folks (unfortunately mostly women) act like not changing the oil is like neglecting to get your haircut. "I haven't changed the oil in 2 years, tee hee!" they say, partially because such idiotic statements get attention from men. But neglecting to change the oil can destroy an engine in short order.

But do you really need to change the oil every 3,000 miles? Maybe. Maybe not.

In the 1960's and 1970's most American cars came with owner's manuals that recommended oil changes every 5000 to 7500 miles, with shorter intervals (3,000 miles) only for "extreme use". However, what they defined as "extreme use" read on daily commuting. Some wags argued that these longer intervals were promoted to encourage planned obsolescence, and perhaps they were right. Cars back then didn't last very long anyway (far less than 100,000 miles).

But the cars back then also had carburetors. A carburetor necessitates more frequent oil changes for two reasons. First, as they do not provide a very precise fuel/air mixture (they are always set to run slightly rich to prevent detonation) they tend to produce more pollution and, by extension, dirty up the oil faster. Second, when starting a carburated car, that initial shot of gas when you step on the pedal shoots a jet of gas down the throat of the carb, and most of this washes down the cylinder walls and ends up in the oil. This initial washdown also adds significantly to ring wear.

So on older cars, the oil ends up dirty and diluted with gas. Even with 3,000 mile oil changes, cars back then started smoking after a few years.

And the oil back then was fairly primitive. We did not have synthetics, of course, and the natural mineral oils had few additives. So oil degraded more rapidly.

Which leads to the next problem. When oil deteriorates, it does so in a non-linear manner. Motor oil can be fine for months, and then suddenly deteriorate in lubricity in short order. Oil change intervals are usually very conservative in order to insure that the oil is changed long before this knee-bend in the lubricity curve is reached.

The Miracle of Modern Fuel Injection

Fuel Injection is standard on all cars now, as there is no way to reach mileage and emissions requirements without it. Modern electronic fuel injection more precisely measures the fuel/air ratio and delivers the correct amount of fuel, without the rich running problems of carburetors. In addition, cold start injectors deliver an appropriate amount of fuel without over-choking the engine.

As a result, modern engines run clean, not only in terms of tailpipe emissions, but in terms of internal components. Sludge buildup and deposits are largely a thing of the past. And as a result, motor oils can last a lot longer in the crankcase.

In addition, motor oils have improved as well. Regular oils are vastly improved over their 1960's counterparts, and synthetics are a quantum leap ahead of mineral oils. Synthetics make a lot of sense, as the oil change intervals can be extended to 7500 miles with ease, and even longer (some manufacturers, such as BMW recommending change intervals as high as 15,000 miles in some instances).

Oil changes, in other words, can be something done only a dozen times over the life of a car, without significantly affecting service life.

And that's the key here, too.  Service life.  In determining your oil change intervals, you have to ask yourself what your intentions for the vehicle are.  Do you intend to keep it forever, or are you going to trade it in a few years?  Even for a long-term keeper, 3,000 mile oil changes may be little more than overkill.

For example, I have a secondhand BMW X5 that was originally leased. BMW uses the on-board computer in the car to determine, based on actual use (cold starts, trip length, speed, load) when the oil should be changed. Under their free service agreement, the oil was changed with BMW synthetic every 15,000 miles or so for the first 50,000 miles.

To some folks, this is heresy.  "The car will be burning oil before 100,000 miles!" they would argue.  But the car just turned 100,000 miles, and even after towing a heavy trailer for most of that time, it neither smokes or consumes a drop.  Of course, since I've had it, I've changed the oil about every 7500 miles or so with synthetic.

I plan on keeping the car another 50,000 miles or so.  So what oil change interval would be appropriate? Changing the oil every 3,000 miles would probably not add much to the equation, but surely would require more time and expense.

And going to a fancy imported oil doesn't make much sense, either.  Spending $10 a quart on motor oil isn't going to make the car run better or last longer, at least under my watch.  And such extreme measures will not likely increase the resale value of this particular car by much.

Oil filters are a similar conundrum.  Some folks swear by a particular brand, and if you look at the filters, yes, there are readily apparent differences between regular and economy brands.  But in a few thousand miles, both will probably capture the same amount of dirt, even if one has more "pleats" to it.  If both are the same price, then by all means, it makes sense to get the better product.  But if there is a significant price savings, there is probably little long-term harm in going to a cheaper filter.

Of course, a BMW X5 is hardly a collector's item.  It is the type of vehicle that gets used hard and put away wet.  For more esoteric vehicles, things like oil change intervals and oil and filter types are probably more paramount.  For the M Roadster, you can bet I am using the "good stuff".

But, is it really necessary to change the oil annually on a car driven only 2,000 miles a year? That's another argument starter right there....
Newer Post Older Post Home
View mobile version