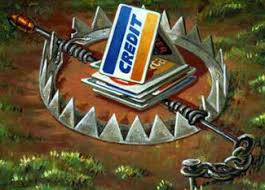 Credit Card companies are not your friends!

Two things to watch out for lately from our friends at the Credit Card Companies and some thoughts on Credit Card Habits.

Two SCAMS to watch out for lately:

1. The Check is In the Mail: Credit Card companies mail you these nice checks, sometimes bound in a checkbook, encouraging you to rollover debt or spend more money. Shred them! In most cases, they have huge interest rates attached to them and will get you in real trouble. Want to do a zero percent balance rollover? Call the company directly - chances are you can negotiate a better deal than these checks.

These are being sent out like mad right now. People have weaknesses around the holidays and may be tempted to spend more than they should. Also, with the new credit card law going into effect in February 2010, they are trying to get a last bite at the apple.

Call the company and tell them to stop sending these checks - if they are lost or stolen, it could create a nightmare for you to straighten out. Some companies (Citicard) send them almost weekly. If someone stole your mail, you'd be in a world of woe.

2. Do you want to OPT OUT? A recent phone call from one company asks whether I want to opt out of the new credit card protection law. Well, they didn't say that directly. What they said was, wouldn't I like the convenience of being able to occasionally go over my credit limit? And pay a $100 overlimit fee? Well, they didn't say the second part.

Gee, no thanks on several grounds. The new law protects consumers by declining charges that go over your limit. This prevents you from spending too much and prevents you from paying overlimit fees if you do. It also prevents a fraudster who steals your card from going on a huge spending spree far over your limit. Yes, they will refund the fraudulent charges, but what about the overlimit fee?

With the new law, you can reduce your credit limit to a reasonable amount and never have to worry about paying "overlimit fees" as you physically cannot go over the limit - the card will be declined.

The problem with this phone call, is that the person making it was totally disingenuous. I said "No Thanks" and he said "You mean no thanks, you don't want your credit card to be limited?" And I said "No, I don't want to pay over-limit fees" and he said "Well, you won't, if you never go over your limit, but may of our customers prefer the safety and convenience of not being limited by a credit limit!"

It was like a Monty Python routine. I finally said "I DO want the protection of the new law, and NO, I don't want to be charged any overlimit fees ever, ever, ever!"

I still am not sure that he didn't record me saying the word "YES" and changed my credit card. And YES, Credit Card companies and other fraudsters do this all the time.

It goes to show you the lengths the Credit Card companies are going to, to trick people these days. It will be interesting to see how things play out on March 1st. You can bet they will try every dirty, nasty, underhanded trick in the book between now and then - raising rates, closing accounts, you name it.

PAYING OFF YOUR BALANCE EVERY MONTH - is this possible for the long term?

It is possible to pay off your balance every month and still end up in trouble - fast.

As I have stated before, having a Credit Card is like having a pet Velicoraptor. It looks all cute and cuddly at first, until it decides to rip your bowels out.

Be very, very careful and vigilant with credit cards. It is all too easy to end up with a ton of debt at an interest rate so high you will never pay it off - ever! Even those who "pay off the balance every month" can get into trouble!

For example, Joe Black uses his VISA card to pay for all his purchases. He gets airline miles and he figures, why not? So everything in his life is paid for on the VISA. He charges a few grand every month for everything from groceries to restaurant meals, to gasoline, to his cable bill, and he gets airline miles. He pays off the balance every month. At least for a while.

Then one month, there is an unexpected expense. His Mother dies, and he needs to fly to the funeral. The car needs a new transmission. His son calls from jail and says he needs a lawyer.

Shit happens, as they say. And it will, in your life, eventually. You can count on that.

Next month, the bill is now nearly twice what it was last month. There is no way he can physically pay this off, so he rolls it over again - at 22% interest for another month. And the month after that? Same thing. It can take a year or more to pay this off - if he's lucky.

The problem gets worse and worse. At the high interest rate charged by airline miles cards, it is very hard to get ahead of the game. Interest can be $100, $200 or even $500 a month, depending on your balance and the interest rate. If you miss one payment, your default rate can go to 30%! Try paying that off.

Joe eventually gets a home equity loan to pay off the debt, paying thousands in closing costs in addition to the interest on the credit card. So much for "Pay it off every month"!

Think it can't happen to you? Think again. If you run up charges in the thousands every month and pay them off every month, that's great - until the ONE TIME you drop the ball, and then it all goes horribly wrong.

One solution is to not use credit cards, but use DEBIT CARDS instead.

Another is to pay CASH.

Yet another is to shop for your card based on LOWEST INTEREST RATE, not on rewards miles or whether they put the name of your school on the card. LOWEST INTEREST RATE is the best deal, because if you ever drop the ball, at the very least you have a realistic chance of paying back the debt at a reasonable interest rate.

You see, a CREDIT CARD is a LOAN, plain and simple. You would not willingly negotiate a loan at 22% interest, would you? And yet many people do just that with Credit Cards, picking a high interest rate in exchange for rewards miles.

Free Airline miles and all that are fine and all. But if you ever, ever carry a credit card balance, those "free" miles are not free. You've paid for them, many times over.

Moreover, in most cases, there are so many restrictions attached to the use of airline miles that it is nearly impossible to use them for anything but upgrades. And the miles expire over time if you don't use them.

And with the low cost of airfare these days, is a free airline trip such a big deal anymore? When you can fly for $99? Sure, some flights are more expensive than that - those are the ones "blacked out" from your airline miles.

It is a loser's game. Get the lowest interest rate you can. If an emergency ever occurs, you have a low-interest line of credit available to you that you at least have a stab at paying back.