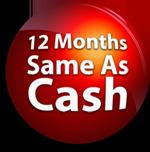 It is a tempting offer, but should you take it?

As noted in a consumer blog, these "same as cash" deals can be dangerous to the unwary:

Here's how most of these deals work. If you borrow $1,000 on a 12 month same as cash plan, you have to pay it back within 12 months to avoid interest. That much is obvious. However, the term "same as cash" is very misleading because most of these so called deals are actually deferred interest payment plans. So, if you borrow $1,000 and pay $950 of it in 12 months and still owe $50, you will be charged interest on $1,000, not on $50! In other words, you will be charged back interest on the full amount regardless of the amount you paid on the loan during the 12 month "same as cash" period.

What's even worse is that consumers rarely think about the interest they will have to pay if they can't pay the full amount within the allotted time. We're not talking about 12.5% or even 20% interest. The annual percentage rates on these "same as cash" deals can be as high as 40% or 50%.

In other words, taking one of these "12 months same as cash"deals is a lot like playing with a loaded handgun. You had better be sure the safety is ON and there is no bullet in the chamber, before you start tossing it around.

But if you really want to be safe, don't play with loaded handguns at all. That's the best and safest option.

Now some folks who are gun enthusiasts will note that if you are careful and responsible with a gun, they can be perfectly safe. And they are right. But you have to be mature.

And I often compare credit card debt and revolving interest debt to handguns, as in both instances, if handled carefully and in a mature manner, they can be "safe" to the user. But handled recklessly or immaturely, well, they can injure you, badly.

Human nature being what it is - and we are all status-seekers of one form or another - the temptation to spend more now and pay later is too great. And the credit card companies know this and will play to your human weaknesses.

As I noted in an earlier blog, I once used one of these "90 days same as cash" deals when I was 25 to buy furniture. On the 89th day, I drove to the finance office (Household Finance Company, or HFC) and paid off the entire balance in full.

Boy, did that piss them off! The lady at the office told me that "You know, you can just 'roll this over' and pay the minimum amount every month, if you want - that way you'll have more to spend now!"

But of course, that would mean I would already owe 90 days of interest, compounded, which back in those days was already a sizable chunk of the original balance. I said "no thanks". She pleaded and entreated and argued, but finally gave in. And I made sure I had a receipt for the balance paid when I left. They lost money on that deal, and lost a huge potential profit opportunity as well.

I recently did a "12 months same as cash" deal at Lowes in order to buy materials to remodel my basement. I thought it would be an interesting experiment. Again, this is a loaded handgun waiting to go off. When the loan materials arrived in the mail, I made sure to go online, check the balance every month, and then set up automatic payments on my bank account to pay off the balance over 11 months, so that the entire balance will be paid off more than a month before the 12 month deadline. And every month, I go online and check the balance to be sure they received my payment and are not playing games with me, like the "we never received your payment" gag. I then reconcile the account on Quickbooks as well. I also set a reminder on my computer calendar to check the balance monthly. Like any credit card account, you have to watch it like a hawk - and redundantly.

12-months-same-as-cash is particularly deadly, as if you are even a day late with that last payment, you owe an entire year's worth of interest - at 22-28%. This can be equal to over 1/4 of the original loan amount. If you make the "minimum payment" as they suggest, you could end up paying nearly double for the item financed, by the time you pay off the balance. So not only are you playing with a loaded gun, it is .50 caliber and will blow your head clean off, if it misfires.

For those reasons, I would never suggest to ANYONE that they sign up for one of these deals. The danger of getting into real financial trouble in a real hurry. For most consumers, who don't have financial discipline and maturity, such easy credit terms are just too tempting. And most credit agencies knowingly lend money in this manner to consumers they know will never have the cash in time to make the payoff deadline.

Like the lady at HFC, the folks at Lowes are not happy that I am paying off the balance on time. They send letters and e-mails encouraging me to take on new debt. "Specials" that are offered for a limited time. If only I would charge MORE on that credit card, so there will be a balance at the end of the 12 months! Otherwise, not only do they not make money off of me - they lose money in the process.

Avoiding the temptation is the key. Everyone likes to think they have the financial resolve to not spend. But we all are weak from time to time. Just saying "NO" to deals like this, is often the best option.

These sorts of deals are like airline miles cards, which temp you with offers of free flights to Hawaii (which rarely materialize in real life). A great deal if you "pay off the balance every month." But woe be to the poor consumer who gets behind on his bills for even a month! The interest will accumulate and compound quickly, to the point where bankruptcy can be a real possibility.

Just walk away from funny money deals. When my Lowes account is paid off in three months, I plan on closing it - and never again opening one of these types of accounts.

So, for example, you borrow $3000 using "six months same as cash" and you make four payments, once per month, of $250, every month, and plan on paying off the balance by the due date. But on the fifth month, you are late with a payment by one day, and now, all that interest is due, for six months at 25% interest, your credit report is trashed, and you have to pay the full amount NOW.

If you go on the website of the credit provider, there is NO prominent listing of the due date of each payment. It is on the STATEMENT that you have to download, and if you miss it, well.....

So, if you play Russian roulette with one of these deals, be careful. Mark the due dates of ALL payments in your calendar, and then make sure you can pay the entire balance by the end of the six or 12-month period.

UPDATE 2020:   A reader writes, "Well, what about the benefits of these deals?  After all, you are 'saving' 22% interest if you do 12 months same-as-cash!" This is what is known as a false comparison.   The most you might be "saving" is the opportunity to get 3% interest on a CD or something, over those 12 months.   And no, comparing the "opportunity cost" of making money in the stock market is also a false comparison - apples and oranges.   Besides, suppose you lost your shirt in the stock market on that money and now could not pay off  the balance on the loan?  Now you are proper fucked.

It is, in a way, like folks who borrowed heavily on their houses while at the same time investing in sketchy things.   Their "investments" blew up in 2008 and the mortgage on their house was still due -and the had no way of paying it.

It is a risk/reward analysis.  The "reward" of possibly making a few dollars in interest over six or twelve months isn't worth the risk of having to pay 22% interest or more on the whole balance.
Newer Post Older Post Home
View mobile version