Normative Cues and the African-American Bandaid 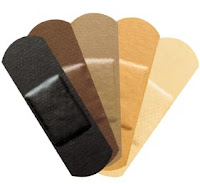 People come in all colors, so why shouldn't band-aids? Or more concisely, why do most band-aids come in a color which represents the color of the ruling class of America? Subtle Normative Cues often fly far under the radar!


I have mentioned the term Normative Cues several times in this blog. I am not sure whether I heard this term somewhere before (from one of my Psychologist friends) or made it up, or heard it and applied it incorrectly.

What I do mean by the term, however, is subtle (or not-so-subtle) social cues in our society that tell you what is "Normal" in terms of behavior or the like.

Some of these cues fly so far under the radar that you might never notice them. And one was brought to my attention by a little old lady in Washington DC.

As a newly minted Patent Agent, my name appeared first in the list of Agents and Attorneys in the DC Patent Agent directory (due to zip code). I got lots of phone calls from folks wanting to get Patents. Most of them, when I explained the costs involved, thanked me and hung up.

But one persistent little old lady wanted to talk with me about her idea for an African-American Bandaid. Intrigued I listed to her story.

She pointed out to me that band-aids come in one color (or they did at the time) and that was a pink, "flesh" tone color - the color of white people (not really even a good match there, but better than for those of darker hues). She pointed out to me that every time a person of color puts on one of these band-aids, it is a reminder that their skin tone is not the "norm".

Her solution was to come up with a range of band-aids with designs on them, with African-American themes. She noted that people of all races come in a number of different hues, and that trying to make a "black band-aid" was just as pointless as making a pink one.

This sort of floored me. I had never thought about such things before. And the odd thing was, when I mentioned it to my friends, I got two types of reactions. White friends would say the whole thing was ridiculous, a tempest in a teapot, etc. and shrug it off. Black friends would give a knowing smile and say "well, you get used to things like that, I guess".

But it is true. And for a young black kid, every time he put on the band-aid, it stuck out like a sore thumb, and the fact that it didn't "match" made a statement as well.

At the same time, I was reading Jet magazine (I have a diverse reading list) and noted an article about an attorney in New Jersey who had a similar idea. He was marketing a rainbow pack of band-aids in different hues, in order to solve the color issue. The only problem with his approach, was that with all the different hues, once you used up the ones that matched, you had to resort to the less-matching colors.

I talked with him on the phone about his invention, and his comments were interesting. He said he pitched his idea to the bandage companies, and not only were they not interested in the idea - they were hostile to it.

But wait, it gets worse. Much worse.

Bandages weren't pink until the mid-20th Century, about the same era that saw the rebel flag made a part of the Georgia State flag and "Under God" was added to the pledge of allegiance. If you look back in time, bandages were white (polar white, not pink) or clear. The pink "skin tone" (an interesting term!) didn't become popular until the age of desegregation.

Sure, other color bandages have been available since then - white bandages used in hospitals, and even clear bandages.  And I've seen ads from the 1960's where the bandage makers have tried various patterns for children and even primary colors (red, blue, green, yellow, but of course, not black).  But the "pink" Flesh-tone bandage has been the mainstream bandage since about the 1940's.

I told the nice little old lady that I would try to make some phone calls and see if the bandage companies were interested in her idea. The results were disturbing. I wrote to one company and received no response. I decided to call to see if they got my letter. The operator who answered listened to me and then put me on hold for a moment. When she came back, she read, word-for-word, a written statement regarding the color of band-aids.

It was scary. Not only were they aware of the issue of band-aid color, but a number of people had called them about it - enough people to warrant a written statement to be read over the phone.

And it begs the question - if enough people are calling about it to warrant a written statement, why not look at this as a marketing opportunity?

Of course the problem with changing color is that it creates all sorts of new issues. No one color is "correct" of course. And as our country becomes more diverse, the pink color chosen in 1950 no longer works for a greater portion of the population. Hispanics and blacks may outnumber "whites" in the future. What are you saying when you sell pink band-aids to a society when pink people are a minority?

Things have changed since then (this was nearly 20 years ago). Clear bandages are becoming more and more prevalent (and solve the color problem by providing no color). I notice that some colored band-aids (and I am using the term in the generic sense, not the trademarked sense) seem to be darkening in hue (at least the cloth-backed kind). More and more band-aids, particularly those marketed for children, use colorful designs and trademarked characters, and thus avoid the color controversy altogether. And I have noticed, here and there, a few packages of band-aids offered in different colors (other than pink).

It seems the band-aid people finally get it.

But the point of this entry (and I did have one) is that Normative Cues can be very, very subtle. You may not notice them at all, as they fly under your radar. And when someone points them out, they are likely to be shouted down as being alarmist or a kook.

Crayola renamed its pink crayon, which used to be called "flesh" - and many people said that this was an example of "Political Correctness" run amok.   But in many cases, this "Political Correctness" is often merely pointing out normative cues, not necessarily arguing for changing them.   Normative cues are the bedrock that holds a society together - and beyond our laws and traditions, sets forth norms of behavior and interaction.   And when you say "your skin color is not normal" you are saying something very powerful - even if it is as subtly presented as in a box of crayons or bandages.

And again, this is not to say the Crayola people or the Bandaid people are racist Klan members, only that they are reflecting the normative cues of the society they are in.  And in our society, for many years, "flesh" colored meant pink.

When something is presented to you as representing a norm, you may not even question it. In any discussion, you should always challenge the premise before addressing the argument.

Perhaps the pink band-aid is not the end of the world. Perhaps not. As a white kid growing up, I never gave it a second thought. But I am sure every black kid, at one time in their life, put on that band-aid and thought about it, as the contrast in colors shouted back at them, you are not the normal color.

In your personal life, as well as with your personal finances, it pays to be sensitive to this type of subtle cue. Television bombards us with these sorts of instructions, telling us what is the "norm" for almost every minor behavior in our lives. For the large part, most of us accept these cues without much of a thought. Living well and living better require that you examine these cues rather than take them, much like a fish swallows a hook. You may find that you have been sold something you never wanted in the first place - and that you never realized you signed on for it at the time.

Some links of interest: