Why do the poor drive so much? 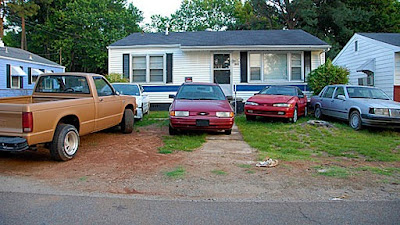 Poverty and the Automobile often go hand in hand.


One of the odder aspects of American life is that the wealthier you are, generally the less you drive.  The fabulously wealthy drive very little - and this goes beyond being driven by chauffeurs.   The more money you make, the fewer places you have to go.  People come to you.

And if you are wealthy, chances are, you don't need to go anywhere.  After all, why drive all over the place when you can sit by your pool and sip tropical drinks?

You've probably seen the type - tearing into the discount gas station at 100 mph in a clapped-out car, not even shutting the engine off.  They run in to buy a pack of cigarettes, put $5 of gas in the car and tear out again.  How far do they expect to go with $5 of gas?

And you've seen their house - the one with six cars parked in front of it - one for each member of the family.  And they all drive all over God's green acre!

Why do the poor drive so much?  There are a number of reasons, I believe:

1.  Poor Economic Planning means that they have to go to the store more often, for example, to get beer and cigarettes.  Such folks have addictive habits and little self-control to manage them, so buying a case of beer is not a realistic solution, as they would drink it all at once.  So they buy one six-pack at a time - which also mirrors the amount of money they have in their pocket at any given time.

If you have better economic self-control, you don't have as many addictive habits.  And even if you do, you can buy in bulk, save money, and take fewer trips to the store.  But poor economic planning makes a person a perpetual consumer - spending money in small dribbles and drabbles, with each purchase requiring an expensive car trip to the store.

2.  Failure to Understand Costs:  Most poor people look at a car as a fixed asset.  You buy it and you have it - or you make payments on it.  The only variable cost is putting gas in it.  But each time you drive a car, it costs far more than the gas used.  In terms of depreciation and maintenance, it can be as much as 50 cents a mile or more.  So all these little trips add up, over time, and cost money.  The poor person fails to see this, and doesn't understand that the "quick trip to the convenience store" to buy gas, beer, and ciggies, cost them maybe $5 in automobile expenses.

3.  Staggeringly Long Commutes:  People from places like Pennsylvania or West Virginia will drive 100 miles each way to a job in the DC area and think nothing of it.  Their "logic" is that they want to live in their "hometown" where they are comfortable and life is better and "more affordable".  But they fail to realize that such long commutes are expensive and leave them little time to enjoy their "hometown."

Again, this is a common problem with the poor - stasis.  The jobs leave a community, and they refuse to leave with them.  They stay in depressed areas that are depressing to live in, for reasons that vary from sentiment to a desire to hunt.  No matter how you slice it, though, it usually is a poor economic choice.

4.  Bringing Meaning to an Empty Life:  Commuters of all economic brackets fall victim to this trend.  I've heard more than one person laud their daily commute - even in Washington DC traffic - as a time for themselves to "relax" and think.  Their car is their castle - with various electronic gadgets and gizmos all there for their entertainment.

And for a lot of people, operating an automobile is the highlight of their day.  They feel important - running this 4,000lb piece of machinery.  For once, they are "in charge" of their life - doing something that is so obviously important!

But this is, of course, a vary shallow experience.  Driving a car is no big deal, in a nation of 300 million cars.  And if being stuck in traffic is the "highlight" of your day, I have to suggest you need to re-think your life.

5.  Nothing Else to Do:  And along these lines, driving around like maniacs is a way for many people to drown out the deafening silence in their lives.  We live in two areas where the major stores are 10-20 miles away - a good distance.  And yet we know people who make this trek daily, to "go shopping" or "run errands."  For some reason, we managed to make do with maybe 1-2 trips per week, if that.

For many people, "keeping busy" is a way of avoiding depression or avoiding dealing with the real issue of life - its finite aspect.  So long as you can keep busy, busy, busy - or at least the appearance of it - you can not think about the fact that you might have 20 years left on this planet, if that.

Kids love to drive, of course, as it makes them feel important and adult.  And drive they do - to visit friends, get away from parents, and go out to "party."  And of course, this leads to a lot of problems, as they are not experienced drivers and partying and driving are usually a bad mix.


If you are wealthier, on the other hand, you may find the need for driving a lot less. To begin with, if you can plan your life better, you need to drive less.  So if you can buy in bulk, you can "stock up" on a week's worth of groceries, instead of buying things piecemeal on a daily basis.

Now granted, in Europe, it is common to shop daily for fresh foods.  This is not what I am talking about here.  The poor buy bad foods (Cheetos, beer) at the highest prices (convenience store) and pay the highest transaction costs ($3 ATM fee to withdraw $20) and make the most number of trips.  It is poverty behavior that is costly - to those who can least afford it.  Like rent-to-own furniture, the poor get the shittiest deals around - but often inflict these deals on themselves.  Are the poor "victims" of this kind of behavior - or does this kind of behavior make them poor?  It is an interesting question.

Second, the wealthier person - the person who understands money better - realizes the cost of operating a motor vehicle and the time involved.  It seems axiomatic that the more educated you are about money, the wealthier you will be.  So if you realize that driving 20 miles one-way to the store is a big waste of money and time, you may plan your trips more and think about the costs, in terms of time and money.  On the other hand, if you don't really think about these things, driving all over hell's half-acre seem like a real blast.

And I suppose that is another element to it.  People who think operating power equipment is fun, be it a car, a jet-ski, snowmobile, penis boat, or whatever, are a little, well, simple-minded and easily amused.  Most normal people get bored of a jet-ski in a matter of minutes.  Most normal people don't view an hour-long drive as a special treat.  But some people - who are not very bright, and thus by extension, usually poor - think driving a car is "fun".  So they do it more.  These are the people who like to drive "straight through" to Florida in 13 hours.  Ugh.

And in that regard, they don't mind a 100-mile one-way commute - they love it!  While people who have better things to do with their time prefer to move in closer to work, or have the work come to them.

Regardless of cause and effect, there is a direct correlation between driving and poverty.  You can literally "drive yourself to the poor house" in this country, and many do just that.

Being SMART with money means understanding the costs involved with the automobile, which can be the centerpiece of money squandering for most homes.  Driving less and having more time for life is a far better and smarter option than letting the automobile dominate your life.

Now, the next question is, why do poor people spend so much time on the cell phone?  That is the subject for another posting, but the answers are about the same.  Feeling important, poor time management, trying to drown out depression and the greater questions in life.

UPDATE:  The cost of driving is one reason smarter people shop online.   I've driven 20 miles round trip (cost:  $5 to $10) to a local store to find something that either isn't in stock, or is sold at a price 2x to 3x that of Amazon or eBay - which offers free shipping.   Even if the prices are equivalent, the cost of driving and the convenience make it worthwhile to buy online.
Newer Post Older Post Home
View mobile version