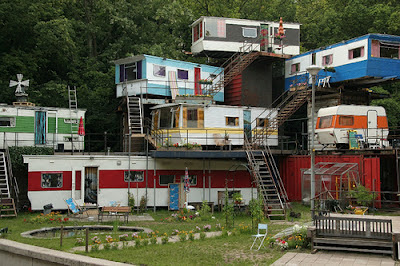 Some folks will spend more money fixing up a trailer than they would spend on a modest home.


Traveling by RV is interesting, and it can be quite economical, if done on a budget.  However, some folks take a good thing and take it too far.  They park RVs permanently in a RV park as a "cheap vacation home" and pay hundreds of dollars a month in lot rent, and hundreds more trying to make an inexpensive trailer into a quasi-house.

It starts out with a few lawn decorations - pink flamingos are popular.  Then Christmas lights are added.  Perhaps a deck is then built next to the trailer, since the occupants get tired of sitting in the mud.   Then plantings go in - flowers, shrubs, even small trees.  Or tropical plants (in northern climes) and then watering systems to keep them all growing.

Then, like most older RVs, they start to leak, so the owners build a roof over the RV, often in a Pole-Barn fashion.  And since this is all permanently constructed on an RV space in an RV park, they are now obligated to continue paying lot rent, lest they lose their "investment".

In some instances, a second RV is added as a guest room.  Then the cars start to multiply.  And of course, you need a golf cart, to drive around the campground in.  Pretty soon, it starts to look pretty trashy - a pile of crap that is rusting, damaged, sun-bleached, and run down, and of course, mildewed.

And the cost?  Overall, it runs into the thousands, actually the tens of thousands of dollars.  Enough money to actually pay for a small vacation cabin on a private lot in the mountains.  And such a vacation cabin would end up being worth something, in the long run.  A trailer "ensconced" on a lot in an RV park, on the other hand, is worth zero in terms of resale value.

So why do people do this?  We see it at every private RV park we've stayed at, which is why we stay in State Parks, National Parks, National forests, or Army Corps of Engineer sites.  These latter locations are campgrounds, for camping in, not building half-assed vacation shanties.

So, why do people do this?  Why do they engage in economic behavior that makes no sense at all, costs them more money in the long run, and provides them with a run-down shanty to live in when on vacation?

It would make more sense to rent a vacation cabin, or even to buy one, if you plan on vacationing at the same place every year.

But it is the cash-flow mentality at work here.  People think in terms of money-per-month and not overall costs.  So dumping a $5000 trailer on a $450-a-month RV site seems "cheaper" than borrowing $150,000  to buy a rustic cabin in the woods.  The monthly cost of the latter could be the same, and the overall cost could be zero - if the cabin and land appreciate in value.   Even renting a cabin would be cheaper and less hassle.

But those transactions sound more expensive, as they involve larger amounts of money up front, even if the same is spent overall.  Over a period of several years, an RV'er who lives in a trailer and builds a deck, adds a roof, installs a water feature, adds sculptures and plantings, ends up spending as much as, if not more, than the fellow who makes payments on his log lodge.

It seems cheaper to build a make-shift cabin out of an old RV, a little bit at a time, but each pink flamingo adds to the overall cost until the comparable cost is the same.

But a second question is this:  Why do people obsessively decorate these ensconced RV's to the point of tackiness?  We are talking signs, fountains, sculptures, tableaux, flags, awnings, plantings, etc. that cover every inch of the campsite and make it look like a junkyard, particularly as it all degrades and mildews over time.

The answer is of course, twofold: The big-box store and the credit card.  Throw in a little boredom, and you have a perfect storm.  The camper goes off to his weekend retreat in the woods and realizes quickly that he is bored out of his mind, particularly when he is sober.  So, he and the missus drive into town to the local friendly Lowe's or Home Depot, and are enthralled by an end-cap display of a water-spitting frog or a solar powered lawn sign.  And pretty soon, they've loaded up their car with crap made in China and are spending their afternoon unpacking and setting up it all.

And the credit card is dinged by another $99, $199, or even $299, for a yard-full of crappy junk.  And pretty soon, the camper cannot even be seen from the road, it is so covered with stuff.  It is unappealing and ugly, and eventually, the owners stops coming, but keeps paying $450 a month for lot rent, as they don't have the energy or heart to tear it all down and make it go away.

How do you avoid this trap?  It is simple.  Never park an RV as a permanent "house" particularly in an RV park.  You are not "saving money" this way, you are just creating an expensive eyesore that will burn a hole in your wallet and make you unhappy in the long run.

A better approach, if you really want a vacation cabin, is to look for a spot of land and build a cabin or at least put a park model cabin on it.