The Reward for Sacrifice Should Be.... More Sacrifice? 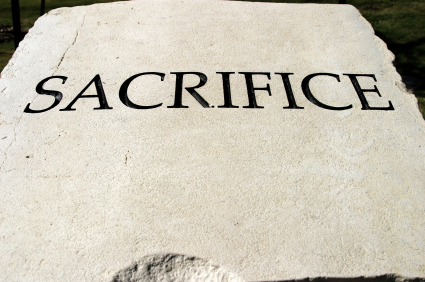 Depriving yourself of the treats in life isn't easy.   And if you do this, it may improve your personal situation.  Sadly, the first thing others will want to do is take away from you.  Is this fair?


Losing weight and saving money are two of the hardest things to do - and are both very similar.  To lose weight, you have to learn to say "no" to consumption and to exercise and work at improving yourself.  It is much easier to sit in front of the television all day long and eat snack foods.   And oh, boy, I could eat a whole bowl of popcorn right now.   But I haven't - in fact, I haven't eaten popcorn like that in ages.  It is still hard to lose weight.   I am just not gaining anymore.

Similarly, getting your finances in order and saving money requires depriving yourself of treats.   A shiny new SUV or sports car is the same as a bowl full of Halloween candy.   Lots of fun and tasty, but it leaves you behind the eight-ball in terms of saving and losing weight.   It is damn hard to say "No" to spending, and to put aside money and be financially responsible.  Damn, damn hard.

And if you do all of that and you lose weight and save money and become financially independent, people will like you and admire you.   Ha-ha, just kidding.  They will resent you and call you names and call for you to be crucified.   They will say you were "just lucky" or "born into wealth" or you were born with "good genes" and that's why you're thin and attractive.   They were just unlucky to have "big bones" or "hormones" that force them to go through the drive-through window at McDonald's at least five times a week.

And all that money you saved?   They should have it, because you were lucky and they are the less fortunate.

But that is why we have (or had) an estate tax - and a Social Security "safety net".   It isn't "fair" that someone should start off life with a million bucks, is it?  (Spoiler alert: Most of those who do, fritter it away within their lifetimes, or within a generation or two).  But a surprising number of people on the USA earned their wealth, one penny at a time, the hard way.   And is it fair that people who made different choices, with regard to drug use, sloth, and feeling sorry for themselves, be entitled to the money of those who sacrificed to get ahead?

To be sure, there are other inheritances that are more powerful than mere money.   My parents left me a modest estate.  But by the time I inherited that, I had already saved more than ten times that amount on my own.   Their real legacy to me was to raise me a household filled with books - a household that valued intelligence over brute force, and education over ignorance.   There were negative legacies as well - alcoholism, drug abuse, sexual abuse, mental illness, family violence, and whatnot.   No one has a perfect upbringing.   And to say that one event in your life "scarred" you forever, is to merely be playing the victim card, in most cases.

The real reason, I think, we don't see more upwardly mobile progress among the poor is this lack of social values.  Whether it is the ghetto, the trailer park, or the barrio, when you grow up in a house without books, a house where no one is educated and education is looked down upon, your future is going to be bleak.   Where the very name they bestow upon you is going to limit your future earning potential, you have a handicap from the get-go.

But as I noted before, I know people who overcame even these obstacles, although it wasn't easy for them.  Should we take away their money just the same?   Maybe there should be some sort of "self-denial" test to see if you get to keep your money.   Problem is, such a test is subjective, and it is a lot easier to just count income and assets.   In a similar way, it is hard to tell if someone is really "in need" or merely scamming the system.   Counting income and assets is the easy way to determine "need" but as I noted before, when someone has half their income "under the table" this metric is faulty as well.   And as recent cases have illustrated, it is possible to scam our "entitlement" system for millions and millions of dollars, because it is basically based on the honor system.

Some Republicans have proposed drug testing for welfare recipients.   I am not against this, and think it is not a bad idea.  If your life is so messed up that you are asking the government for money, maybe you need to think about your drug problems.   And maybe it would force some folks to make a choice - drugs or free government money.  And if you want to choose drugs, fine.  Just earn your own money to do it.

To others - mostly drug users - this idea is appalling.   Why should one group be singled out (because they are asking the rest of us for money?).    And this goes right along with a narrative that seems to be gaining currency these days - that the system is "broken" and the deck is stacked against you, and that no matter what you do, your future will never change.   So we might as well just take away money from those who have, and give it to those who have not - after all, that's only fair, right?

The problem with these sorts of ideas - doubling the minimum wage, guaranteed annual income, abolishing welfare reform, and so forth, is that they would encourage non-achievement at the expense of achievement.   And as the recent tax "reform" law illustrates, they would only punish the upper-middle-class (those who are trying to achieve) while letting the very, very wealthy off scot-free.

Oh, and that's the other problem with these wishful thinking ideas:  In today's political climate, they have as much chance of become law as Hillary has demanding a recount.    The current government is not going to go along with a "share the wealth" philosophy, as recent events have illustrated.   Worse yet, Democrats will surely lose elections if they embrace such a radical agenda.
Newer Post Older Post Home
View mobile version