Do You Identify As a Democrat Or Republican? 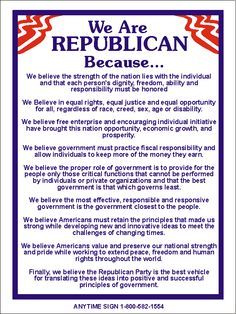 Do you identify as a Democrat or Republican or do you just vote a particular  way?

Traveling through Montana near Missoula, we saw a billboard which in large letters proclaimed "Be Republican!"   The billboard went on to explain that Republican values were Montana values and therefore Montanans should be Republicans.

In other words, their identity isn't tied to who they vote for.   And that could be troubling for the party hacks. What struck me is interesting about this billboard is that it was exhorting people to identify themselves as party members or as having some sort of party values that extended far beyond the mere act of voting once a year.

It is sort of like how marketers try to get their hooks into us and identify as either a Ford man or a Chevy man or as liking Miller Lite vs. Bud Light.    Once we've established our brand loyalties as part of our identity, they can then manipulate us all they want to. We've given up any thought or rational analysis in favor of blind loyalty.

Fortunately, as I noted above, the vast majority of Americans identify themselves as independent. And presumably they identify themselves as independent in terms of pickup truck and light beer choices as well.   Being blindly loyal to a political party makes no sense, particularly when politicians of both parties are routinely indicted for fraud, sexual assault, and other transgressions. Who you vote for matters more than the mere party affiliation, particularly since even among the parties there is a variation in political thought.

Being blindly loyal to a particular brand of product makes no sense when that manufacturer produces a defective product or the company is bought out by some conglomerate, strips the content, and pumps the product until the consumer has finally figured out it's a piece of junk.

Similarly, political values change over time as well. The Republican party was once the party that stood for the abolition of slavery.  Later it morphed into the party of big business and protectionist tariffs. Still later, it morphed into a party of free trade and balanced budgets. It seems today's Republican party now stands for massive deficit spending and trade wars - and right-wing social issues.

What the Democratic party stands for, is anybody's guess at this point.
Newer Post Older Post Home
View mobile version