What the Heck is Going On? (Living in Denial) 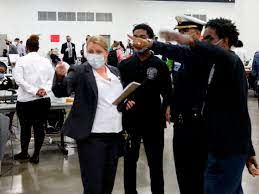 As the vote count continues, the Trump administration brings a number of spurious suits.  Why?

A reader from the UK asks why the Trump administration is claiming that "poll watchers" are not being allowed to watch the counting of the votes.  "You can see it clearly on the telly," they said, "Right through those big glass windows - and there are people inside the room as well!"

Indeed this is true, and the Administration has successfully sued to allow these "watchers" to stand within six feet of the ballot counters.

But there isn't much to see.  One Republican Apparatchik claimed they could now see if the ballots were "invalid" - but the ballot is just a sheet of paper with circles filled-in. How do you tell if it is valid or not?  There are no names or addresses on the ballots, just circles.   You can watch all day long if you want, but odds are, there isn't much to see.  Maybe if a ballot is spoiled or doesn't read, it would be good to watch to see how it was counted - does a check-mark count as a vote?    We get into "dangling chad" territory, here.

But those ballots are few and far between, and not enough of them would change the outcome in Michigan, for example.  Of course, in Michigan, the count is already done, so it is kind of moot.  And the spread in ballots isn't enough to trigger an automatic recount.  If there was a recount, it is doubtful it would change the count by more than a few hundred votes.  Getting 20,000 votes thrown out at this point - based on no evidence at all - would be a tall order.

So why is Trump doing this?

First of all, is the narrative that Democrats are "stealing the election" with the help of Facebook and Microsoft or some such nonsense.  They want to de-legitimize any possible Biden Presidency before it starts.  They have constructed a narrative that he was not legitimately elected, and thus not a "real" President.  This is along the line of the "Obama is a Kenyan" nonsense we saw last time around.

Pray tell, with wild stories like that, who in their right mind votes Republican?  While I have some conservative fiscal views, I cannot vote for any GOP candidate simply because the party embraces these far-out conspiracy theories - which are an insult to my intelligence.

As I noted before, any business relationship you enter into based upon a lie, no matter how trivial, will go downhill from there.  Sure "all politicians lie" - they tell whoppers about how their policies are going to change America or whatever.  But the GOP has been in reality-bending overdrive with "Birther" stories (revived for Kamala Harris - who I am not fond of, but voted for anyway), this "voter fraud" nonsense, and of course even wilder theories like "Qanon" which Trump apparently embraces by dog-whistling to.  Worse yet are white supremacists and basement nazzies that again, Trump calls out to, instead of clearly denouncing without waffling.

It seems this branch of the GOP has given up on reality entirely, and is engaging the insane portion of the electorate.  As I noted before, I "get" that you might vote for a tax cut if you are making $300,000 a year.  It makes no sense if you are making $60,000 a year - odds are, you aren't paying much in taxes to begin with, and Trump's "tax cuts" didn't affect you one iota.   I "get" that maybe you are against abortion and want conservative judges on the Court.  I "get" that maybe you run a business and are tired of drive-by litigation.   These things make sense - you are voting for your own self-interest.

But I don't understand embracing insanity, except perhaps that the people who I "get" are a distinct minority in this country (about 1% by some estimates) and not enough to elect a dog catcher, much less a President.  So... you have to lie - and lie a lot - to convince the little people to vote against their own interests.  Little people who live in a dilapidated trailer and fly a Confederate flag from the back of their ratted-out pickup truck.  They believe in "trickle down" economics, even as the wealthy piss all over them (like the President, they are fond of watersports).

But this strategy loses as many voters as it gains.   I didn't benefit much (if at all) from Bush-era tax cuts or Trump-era tax cuts.  I don't give a shit about abortion one way or the other.   Yes, I think our tort system could use reform, but on the other hand, it isn't exactly choking off our economy. And eliminating too many regulations can actually hurt business more than help it.  So they've lost me on those issues.  And when they go off the deep end with Qanon - well they've lost me for good.  That shit is just evil - there is no other way to put it.

The second reason Trump is doing this is his grip on reality is very weak.  He claims to be a business genius, but every single business he has been in, other than starring in reality shows, has failed.  He calls his failures successes and moves on.  It is like the deal with Carrier in Indiana.  He went there and claimed he made a "deal" to keep the factory open.  He declared success and Carrier quietly laid-off all the employees a month later.

Same with Lordstown - he "saved" the factory and made a "beautiful deal" and then GM closed the place and moved production to Mexico.   So long as Trump believes he won, he is happy.  And most of his legion of blind followers don't know any better, because all they watch is Fox News.

Some say that if he merely took the inheritance he got from his father and put it in a mutual fund, he would be far wealthier today than he is.  This is a man living in denial.  Denial about his mail-order brides, his receding hairline, his skin tone, his body weight and fitness, his business acumen, his popularity, his presidency, and the recent election.

If something goes wrong, well, it has to be "fake news".   He hires and fires people with regularity, as they go from being "excellent" to "losers" - once they wise-up to what he really is like.  Everyone is wrong about everything except him.   This is not a mentally healthy person.

So, you can imagine the panic he is going through right now.  It appears he may lose the election - and that is just not possible!  He is popular!  People love him!  He's the best and least racist President in history!  It has to be a fix, fraud, or "fake news" - anything other than his toxic personality and failed policies.  The man has higher negatives than Hillary - his arch-nemesis!

I doubt Trump will ever come to grips with this.  It is still possible he may win the election "fair and square" in the Electoral College.  But Joe Biden won the popular vote -with the most votes ever cast in the USA.   Trump will deny that happened, just as he denied that Hillary clearly won the popular vote in 2016.   That should have been the tipoff early on - his insistence that he won the popular vote and that his inauguration crowds were in the millions.

The lawsuits they have filed so far have no real merit - they are based on broad allegations and no evidence.  But the court of public opinion doesn't follow the Federal Rules of Evidence. Trump followers don't need no stinking evidence!  If Trump said it was true, that's good enough for them.

What this means down the road isn't clear right now.  I suspect Trump is laying the groundwork for endless Senate investigations of the election after January of next year (presuming he loses).  Investigations, like the multitude launched against Hillary, that went nowhere.

Welcome to American Politics for the 21st Century - where reality is whatever you claim it to be.  But as I noted before, fear not, as we've been through similar periods in the past - with Senators beating each other unconscious on the floor of the Senate with their canes.  People electing politicians who promise "every man a King!" and so on and so forth.

Lincoln said it best - "You can fool some of the people some of the time...." but eventually reality slaps them in the face and they sober up.

I have harped on this a lot in this blog - externalization.  Today, people don't want to confront their personal problems but instead blame them on someone else.  And their "personal problems" on a global scale are trivial - they spend too much money on crap and end up in debt.  People in America are hardly starving or facing real privation, as is the case in most of the rest of the world.

Left or Right, people are embracing extremist views - "if only" we outlawed immigrants, or forgave student loans or whatever, we would be living in Shangri-La.   But most of these pie-in-the-sky ideas never pan out, or when they do, they end up doing just the opposite of what was intended.  Trump's tariffs didn't reopen steel mills or reduce unemployment in the "rust belt" or bring back cushy union jobs - rather, just the opposite.

Eventually, reality asserts itself.  As I have said time and time again, you might think you can fly from a building like those characters in "The Matrix" - but that mean, nasty old concrete sidewalk rushing up to meet you has other ideas.   Reality is, of course, value-neutral.  It just seems mean and arbitrary when you do stupid things like jump off a building, sign a student loan, or go into debt for a Jet Ski...