What Lake Is This? 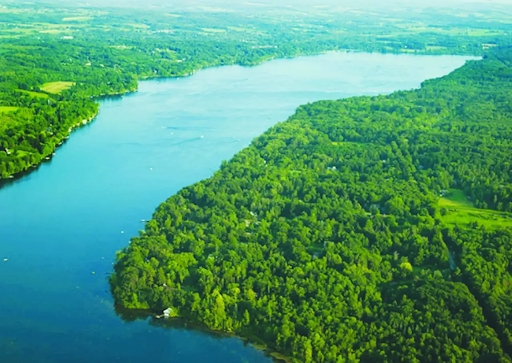 Sometimes it is best to see things through new eyes.

We were kayaking on Cazenovia Lake, which is where I was raised.   From the South end of the lake, we launch our kayak, and I can see my childhood home - completely made-over, of course.  Not badly, just different.  All the towering pines have died off (as they are doing at our new home on Jekyll), exposing the house to the lake and the busy road.  When I was growing up, the house could barely be seen from the lake, although you could see the lake just fine from it.

Today, well, people want "look at me!" houses and cut every tree and shrub between them and the lake, or if not on a lake, the road.  It is a different mentality - you spend money and you want to shake it around, I guess.

But as we put the kayak in, an earnest young lady in a Prius with New Hampshire tags pulled in and asked us, "What lake is this?" because she had no idea.  She was transiting New York State via old Route 20, which was the Thruway before the Thruway, back in the pre-war era.   So we told her a few things and what to expect as she went down the road - maybe a nice restaurant for lunch in Skaneateles, or a winery or two.  We bid her farewell and took off on the Kayak, nearly circumnavigating the lake (it was a long day and I am beat!).

As we went along, I told Mark some of the same old boring stories about what used to be where and who used to live in what house.  Back in the 1970's, there was undeveloped property on the lake.  The old mansions, built in the early 1900's for rich folks from Boston and New York (to get away from that pesky pandemic, no?) were occupied in the 1970's by local Irish Catholic families of a dozen children or more - the descendants of the servants of those original mansion owners.   We used to skateboard in the ballroom.   In the postwar era, no one wanted those "white elephants" which were uninsulated (being summer homes) and having 12 bedrooms, impossible to heat.  One was donated to the village as a park, and the villagers burned it down because no one could figure out what to use it for.

Along the railroad right-of-way on the other side of the lake were "railroad camps" from the 1930's, on land leased from the railroad.  Many of the Finger Lakes, such as Cayuga, had a similar arrangement.  Move out to the lake for the summer with the family, and then flag the train on Monday morning to go to work, returning to your family on Friday.  Live like a rich bastard, on a budget!

Many of my school teachers lived in some of these camps, which were now full-time houses.  They were cheap - although expensive to heat.  Teachers really were underpaid - back then.

Well, all that has changed.  The mansions are now once again occupied by rich folks, who have restored them beautifully - and sold off all the land around them to housing developments.  The railroad camps have been expanded into houses - few original cottages remain. And it goes without saying, that the railroad tracks are long gone. Many other camps were torn down, and several adjacent lots combined to build million-dollar estates.  Things change over time.

We drive around the area and places that were once cornfields are now housing developments.  Where are all these people coming from?  It's not like there are good-paying jobs in Central New York.  Well, maybe there are - I don't know.   But change is the only constant.   I just hope we all enjoy eating vinyl siding, when the last cornfield is plowed under for yet another edition of Foreclosure Mews Estates.

Mark had heard my narrative before, and I realized that maybe it is best to let go of the past - and view the lake like the lady from New Hampshire.  What Lake is this?   And if I did, I could appreciate it for what it is, not what it was or used to be.   I lived there from 1968 to 1978, a mere ten years, although I stayed in the area for another nine or so.   That was more than 30 years ago.  Most of the people I knew are either dead or have moved on, or we would not recognize one another.  None are likely living in the houses on the lake anymore.  I could not afford to own my own childhood home - just the property taxes would be killing me.

Sometimes it is best to let go of the past and view things from a new perspective.  How would someone who had never been here before view it?  And funny thing, this is a good idea in your personal life or if you run a business.  I mentioned before how you can not even see things like a cardboard box in your hallway, because you get so used to seeing it.   And if you run a business, this is very true.  How many convenience stores have you been in, where junk has piled up in a corner because the employees and the owner have gotten used to it?  This is particularly true in private campgrounds, where owners let junk accumulate and don't realize it, as they cannot even see it.  You sometimes have to look at things through new eyes.

But what about the boring stories, you say?  Well, some of them are pretty funny.   Here's one.

One of the houses we kayaked by along the lake was owned by Mr. Gietz (not his real name) who owned Gietz industries, which he inherited from his father and was founded by his Grandfather.  He was married, but a rather "flamboyant" man, and it was a poorly-kept secret that he had "gentleman's parties" at his lake house, often inviting young men to them.   My parents took me to his house one night for a cocktail party, and he wanted to show me his new purple 1976 Cadillac Eldorado convertible.  It was in his three-car garage out back and I noticed the passenger-side mirror was missing.  He explained that he kept snapping it off when he backed out of the garage, so he had the Cadillac dealer just cover the hole and repaint the door.  He was a funny guy.  He had his hand on my thigh the entire time he told the story.

Anyway, fast-forward a decade and I am water-skiing with my friend Ed, and we are both thirsty, but having spent our last dollars on boat gas, had nothing to drink.  Ed said, "Let's go to Mr. Gietz's house, he'll make us a drink!"  I wasn't sure why he thought this, but I went along with it.  We contrived to water-ski up to his dock and "just happen" to fall there.  He was on the porch, wearing a paisley bathrobe with velvet trim, perhaps cut a bit too high.

"You boys look like you could use a drink!" he said, "Come on up!"  So I tied up the boat and we went up the dock to the deck on his log cabin, dripping wet in our speedo swimsuits, two young 23-year-old bucks.  He emerged from the cabin with a tray with glasses and a large sweating pitcher of gin-and-tonics.   And for the next half-hour, we sat there, getting mildly buzzed, while he enjoyed the company of these two dripping-wet nearly-naked young men on his porch.

All was going well until his wife arrived.  "Harold!  What are these two young men doing on our porch!  Again?  Really, Harold!"

"We were just leaving, Mrs. Gietz!  We lost a water-ski here and were trying to find it!" We made ourselves scarce and let Mr. Gietz deal with his wife, who no doubt had seen this all before.  It was kind of funny, really, and I realized only later that my friend Ed had been to Mr. Gietz's house many a time before - perhaps for free drinks, perhaps for something else.

Ed's parents passed away and their lake house was sold - the new owners have remodeled it to the point it is unrecognizable.  Ed moved back the to the city and we lost touch.  Mr. Gietz is long dead and Gietz Industries was sold to a consortium of investors who loaded the company up with debt, causing it to eventually fail, leaving the highly-paid union employees with a decimated pension fund and no jobs - the Romney way.  We no longer make things in Central New York.  Apparently the new form of work today is texting people on their phone - from what I can gather, anyway.  Mr. Gietz's house is also unrecognizable as well.  The original log cabin is still there, but it appears to be in the process of being swallowed-up by an eight-bedroom modernist monster. Times change, values change. Memories remain, but what are they, really?

Sometimes, it is best to see things through new eyes.