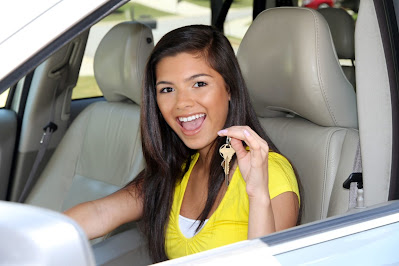 When you were her age, getting that first car was everything.
When you were a kid, chances are, life was pretty sweet, from an economic standpoint. Your room and board were paid for. Your clothes were paid for. You had no rent to pay, no mortgage, no credit card bills. If you wanted to go somewhere, the school bus took you, or your parents drove you, or you went by Schwinn or Hush Puppy.
And yet, as soon as most of us turned 16, the only thing we could think of was to get a car - anyway we could. The car represented freedom, maturity, and status with our peers. It also represented an opportunity for adolescent sexual adventures, which at the time seemed so pressing and mysterious. To many a 16-year-old, a car is everything.
Some kids are given cars by their parents, sometimes rather nice ones. Sometimes this turns tragic, as it did in Fairfax County several times, when well-meaning but stupid "Weekend Dads" try to curry favor with their estranged teens by buying them brand new Mustang Cobras or BMW M3's with predictable, deadly results. A wheel goes off the pavement, they over-correct and swerve into oncoming traffic.  Usually there are six teens in the car, none wearing seatbelts.
But even for the teens who survive such "gifts" the normative cues given are awry. Most working people have to struggle for years to afford such vehicles. And in fact, the same teen, when a 20-something, will likely have to struggle with years of car payments to afford such a vehicle. And yet, they are handed one at age 16, with predictable consequences - the car won't last until college, most likely.
Other teens, whose parents are not so well off, or whose parents are not so wracked with guilt over divorce and neglect, will go out and get a job at the local mall so they can afford a car. That is what this blog entry is about. When you ask the teen why they need an after-school job, which often interferes with their schoolwork, they will reply "So I can afford a car".
When you ask them why they need a car, they will reply, "So I can get to my after-school job." The circular reasoning is apparently lost on them.
But lest we take too much of a dig at teens, how many adults, including ourselves, fall into the same trap? We work at a job so we can afford a house, cars, clothes, etc. We buy a house in a pricey suburb near a city so we can be near the job. We buy a new "reliable" car that we say we need to "get to work". And we buy clothes that have no other purpose than to wear to the office.