Your Sewer Line and You

Owning a house is fun, particularly when expensive things break.

The "American Dream of Home Ownership" is a false dream.   The American Dream - if there every was one - was all about succeeding on your own merits in a free economy - having opportunity to get ahead and make something of yourself, regardless of your background.   That was the dream, not owning shit.

Politicians, however, have whored that dream and made it all about owning houses - not homes, houses.  A home is where you live, and it could be a tent or a travel trailer.  A house is just a thing you buy to make into a home.

And once you've owned a few houses or condos - I've owned nine so far (including investment properties), and currently own two - the joy or thrill of having a nice refrigerator or fancy countertops sort of wears off, rather quickly.   It is like owning a car, only more expensive and harder to replace.   A car you can tow to the dealer and for a couple hundred a month get a new one.   A house, well, unless you are really, really handy, can be costly to own and repair.

And even if you are handy, you do get tired of working on houses.  And when you get older, well, you become unable to do so, so you have to hire people, and they want a lot of money to fix things.   And increasingly, the "things" a house needs are getting more and more expensive.   Time was, you could replace a central air conditioning system or a furnace for about $3000.   That was a decade ago, if not more.   Today, I am hearing neighbors paying $5,000 to $15,000 to have new systems installed, which is a lot of money.   Going fancy in the HVAC department, with zoned systems or hydronic heat can make this even more costly.

In addition to things like that are the little hidden bits that can be costly to replace only because the labor cost is so high.   I wrote before about your home's water line.  When I was young and robust, I replaced my home's water line in a weekend.  It was hard work, but not technically difficult.  The parts cost was less than $100.  It was digging that big hole that made the process so hard - and so expensive, if you had to hire someone to do it.

And every home has a water line - or a well - and eventually they need to be replaced.   When you buy a home that is 40 years old or older, this is something to think about.

Sewer lines are another issue, which I wrote about in the same posting above.   They can be very costly to replace, particularly in the North where they are buried deep.   Here in the South they almost lay them on the ground (not really, actually about 18" deep, if that).   Nevertheless, if your home is over 40 years old, you may be presented with a surprise bill one day - a bill that you may not be able to pay if you are living "paycheck to paycheck" and your credit cards are maxed out.

With a Condo, it is no different.   And our remaining condo is continually having pipe breaks, even after all the HVAC piping was replaced.  As a result, we have more special assessments and these are often unexpected and onerous, particularly again, for the homeowner who is living "paycheck to paycheck" and whose credit cards are maxed out.   Which is a good reason not to live that way, and no, you don't have to, you just have to learn to live with less.

It is also a good reason not to be "house poor" or to stress yourself financially to buy a house, as it leaves little headroom should something unexpected happen.   Buy less house and have a margin of safety.

Our sewer line is about 45 years old and it is showing signs of needing replacement.   Problem is, previous owners planted trees near the line, so they tend to extend roots into it.   The second problem is that those trees are now 150' Georgia Pine trees, that are about 24-30" in diameter and are very close to the house.   Removing the trees is a prerequisite of replacing the sewer pipe, and removing the trees (if a permit is available!) is expensive and difficult - and also tears up the yard pretty good.

By the way, the next time you think about planting a tree, think about where you are planting it.  Stay at least 10-15' away from sewer and water lines - the farther the better - and also away from the house itself.   Think about how tall the tree will get and how easy it will be to remove later on.  Remember that you may need truck access to remove tall trees.   Letting a stray pine tree grow up because you think its "cute" to have it near the house is like bringing home a lion cub because he is cuddly.   Later on, he will grow up and eat you in the night.

So what's the point of all of this?   Well, owning a home house isn't all that it is cracked up to be.  It is just owning a thing that is on a piece of land that ultimately belongs to the government.  Owning a house means you are basically a steward of it for a few years - the average being about a dozen years or so - before you move on to some other home and someone else takes over yours.

Getting emotionally involved in a house or thinking it has some special meaning is foolish thinking.   You will likely move away eventually, and move on to something else.   Over-paying for what can be a maintenance nightmare is just plain foolish.   Houses are just things, and when markets heat up and people get excited about buying "homes" they forget about things like broken furnaces and busted sewer lines and leaky roofs, and other high-dollar repairs than can quickly turn your "dream" into a nightmare - if you don't budget for these things in advance.

Worse yet, many a young homeowner houseowner (interesting term, "homeowner" - sort of like "worker" or "consumer" or "motorist", no?) will immediately rip out a brand-new or at least serviceable kitchen or bath and spend tens of thousands of dollars replacing it, without thinking about mandatory expenses like a new roof or driveway (oh right, I did that this month, too - $1250 just to replace about six feet of it), furnace, air conditioner, and so forth.

Renting may seem like a crappy deal, but on the other hand, those expenses (and worries) are not yours.  If the roof leaks, it is an inconvenience.  It is not a worry to you whether the house will fall down or what its resale value is.  There are some advantages of renting.

On the other hand, if you are astute and handy, owning a home can be a good deal, particularly if you stay for more than five years (to recoup the transaction costs) and if you can do a lot of repairs yourself.   For example, we are finally replacing our ancient wood-frame single-pane windows with vinyl replacement windows.   The overall cost for the windows is about $2200 or about $180 a window (the prices have gone up recently - the days of the $99 replacement window are gone!).   Since we are doing the installation ourselves, we are saving at least $2200 in installation costs.  And it is not all that hard to do, either - if you are handy and not afraid of taking risks. 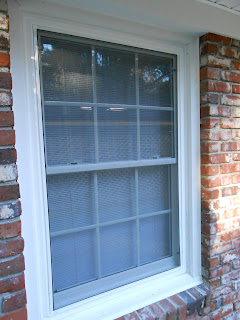 We replaced this window in the garage first as a test to make sure the size was correct.  Sadly, when we returned to Lowes for more windows, the $138 replacement model was sold out - and they are not carrying it anymore.   Home Depot was able to order the windows, but at a slightly higher cost ($180 per window, with argon).

Of course, it doesn't end there, does it?   After rebuilding the garage door opener about four years ago, it started doing something really weird - opening and closing by itself.   An older unit, it did not use "rotating codes" and some sort of electrical interference is setting it off.   I looked online for answers, but the bottom line seemed to be that replacing the motherboard was the only solution.  A $57 solution.  A new garage door opener - basically the same model but with rotating codes and optical sensors - is available from Lowes online for $119 plus tax (our friends at Chamberlain - a closely-held family-owned company, pretty much own this market).   So, I guess it is time to replace that as well.   Might get a dollar or two for the old one on Craigslist.

UPDATE:  You can't give away a used garage door opener.  They are so cheap new, no one wants a used one.  And because of liability concerns (older ones have fewer safety sensors) even charities like "home again" won't take them!

So, what's the point of all this?  Only that owning a house is a series of expenses over time, just to maintain and keep it up - not to mention the labor of cleaning (we have an appointment with the pressure washer as well!).   The more house you own, and the more fancy it is, the higher these repair expenses will be.

This is a choice, not an obligation.  If you are not handy, the costs could be rather steep, and often unexpected.   Owning less house, or even renting are two viable alternatives.  If you don't own a house or condo, don't feel like you are missing out on some great fantastic deal.   While it can be financially advantageous to own in some circumstances, odds are you will have more money in your 401(k) than in your house, by the time you retire.

UPDATE:  After more camera work, we determined that the real problem wasn't our sewer line, which was replaced (with PVC)  about 10 years ago, but where it met the municipal system -which had clay pipe.  Tree roots were tapping into the joints at the clay pipe.  I call the sewer authority and they claim they will come look at it, and possibly cover the repair.   So maybe I dodged a bullet here.  We'll see!

UPDATE:  The sewer authority came and inspected the sewer pipe, which was made easy by the fact I spend a couple hundred having an access port put in.  If you put in a sewer line, make plenty of access ports for inspection and roto-rooting!   Anyway, they agreed the old clay pipe was in bad shape, but if they replaced it everyone on the block would want a new one as well.   So the guy told me that if it ever has a root problem again, to call him and he will "send the guys out" to roto-root it for free.   Sounds like a workable solution for now.

All of the island plumbing was installed in the 1960's and we had a water main break the other day which was pretty serious.  I hope this is not sign of things to come - like with our condo!  Pipes laid underground do wear out over time.  Just because you don't see them doesn't mean they are not there!