The Problem With Paycheck-to-Paycheck 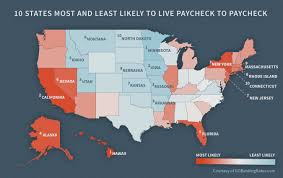 Living "Paycheck-to-Paycheck" is a choice for many people, not a mandate.  Once you set up your finances this way, you become economically vulnerable.


There are a lot of people in the United States of America - the wealthiest country in the world - who want to tell you what a rotten deal they got out of life.   We really should send folks like this over to Africa so they can see what "a rotten deal in life" really looks like - and send some lucky African back.

Americans feel "put upon" because they perceive that "everybody else" has all sorts of nice shit, and for some reason, they don't and obviously, somebody took the money away as it wasn't their fault they are broke all the time.

It is sort of odious thinking, particularly when it arrives with the tagline, "Sent from my iPhone!" and you realize they are hardly put-upon in life.

The reality is, they decide they have to have certain things, like a new smart phone or a new car or  cable television, or whatever, and thus stress themselves financially to get these things, leaving little or nothing in savings at the end of the month.

In fact, since they have a gradually accumulating credit card debt, they are slowly working their way to a credit card crises, and that won't be pretty.   But this happens to about 90% of Americans, I think, at one time in their lives.   The have-it-all-now lifestyle is pretty well ingrained into our culture.

And again, as with all of my blog entries, I know all about this from personal experience.   Every stupid thing I recount in this blog is something I have done, to one extent or another.   If I hadn't made a small pile of money in Real Estate along the way, I would really be in serious trouble about now.  But that is a subject for another blog.   I will just say, right now, that all the crap that I blew money on, over the years, was, in retrospect, utterly worthless junk.

It is possible to make sacrifices and save money.  For example, when I was a young man and moved to Washington DC (actually Northern Virginia) about 30 years ago, I shared an apartment with Mark, and he had a fairly new Volkswagen, and I had a very tired old 1968 Chevrolet.   Now, I could have walked to the Metro every day (which would have been good for my health) and taken the Metro to the Patent Office.   But instead, I decided that I "needed" a brand-new car, and moreover "needed" to pay $100 a month to park it at the Patent Office, which on a salary of less than $20,000 a year was a lot of needs to have.

But I was thinking like a lot of people think - that you "have to have" your own personal car.   It is so ingrained into our society.  "His car" and "Her car" are the norm.   We have two cars, but probably only need one.  But our neighbors say, "which is your car?" as if the money came from separate bank accounts.   And for them - people married 50 years or more - that is how they play it.   It boggles my mind.

If I had decided to "do without" that new car, for five years, and took the Metro to work instead, I could have delayed the expense and have another $100,000 in my bank account today.  Better yet, I could have saved up money for that car and paid cash, from a private owner and gotten a much better deal.   I chose to do neither.

Instead, I was living paycheck-to-paycheck, which is a place you never want to be.   Why?  Because it makes you financially vulnerable.

When you see advertisements for extended warranties, rent-to-own furniture, consumer financing, and other bad bargains, they always try to sell you "peace of mind" and show some poor consumer with "unexpected expenses!" of $500 or more that they cannot possibly afford to pay.  This in and of itself is shocking, but it is true.   Most Americans, if faced with an unexpected expense of even a few hundred dollars, would have no clue as to what to do.

This places them in a condition of economic vulnerability where they have to rely on high-interest credit loans, just to pay for things that, in retrospect, they should have expected to pay for.   And part of this "unexpected" aspect is that people fail to understand technology.

For example, 10 years ago, I bought a house on Jekyll Island.   It had been completely remodeled, which was one attraction, as I didn't want to remodel yet another house and go through all that hassle.   This meant the roof was new, the appliances were all new, the hot water heater was new, and the HVAC system was new.

Now, as I noted before, the design life of most major appliances is about 15 years.  This is an average amount.  Some last longer, some less.   It depends in part on the care you give them (mashing those membrane switches will kill high-end appliances more quickly).   The point is, in the next ten years, I can expect to have to replace every single appliance in my home, as well as the roof, the hot water heater, and the air conditioner.   These are hardly unexpected repair bills, but rather expected ones.

Houses are just machines - and machines that wear out, over time.

When I was living paycheck-to-paycheck, I would have to borrow money to make these predictable repairs.  And that in fact is what I did in the past, when I needed to make repairs on my house in Virginia. At the time, I didn't fully recognize what I was doing. I was living paycheck-to-paycheck, and not thinking about future needs, but rather just spending every penny and then borrowing a penny more.

This made me economically vulnerable.

People complain they are living "paycheck to paycheck" and then act surprised when the car needs an "unexpected emergency repair" or the washing machine breaks down.   But these are not unexpected events but predictable ones.   And if you study the finances of most people (including myself), other than the very, very poor, usually there is enough money to set aside for a "rainy day" but instead, people choose to buy a new cell phone (for every member of the family, natch) and get all the cable channels instead of none.

And when asked why they do this, they make weak excuses like "It's our only luxury!" as if luxuries were an entitlement when you live paycheck to paycheck.

And the problem with that mentality - the problem I faced - was that when you start financing everything in your life on a credit card, you pay interest, which makes you even poorer, which means it is even harder to save for a "rainy day" when it is pouring buckets all around you.

It took a long time to get out of the paycheck-to-paycheck mentality, and anyone at any income level can do it - yes, even Johnny Depp.   You set up a lifestyle that costs a dollar more per month than you earn, you will eventually go broke - on an income of ten thousand dollars or ten million dollars a year.
Newer Post Older Post Home
View mobile version