Your Disposal and You 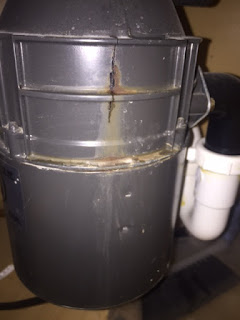 Insinkerator dispose-alls have plastic housings that are prone to cracking.

We bough this house about 11 years ago, and it was remodeled by the previous owner top to bottom - new roof, new HVAC, new kitchen, new baths, and so on.  It was the first house I didn't have to remodel myself.

The problem is, most of the parts of a house need renewing about every 15 years or so - hot water heaters, appliances, HVAC systems, and so on.   And we are closing in on 15 years, and starting to see a few things going wrong.

I spent the last weekend in toilet-land, rebuilding the master bath toilet yet once again.   Fortunately, that turned out OK, with the new hydro-seat flange.  And we repainted the bath, this time using semi-gloss  paint and gloss on the trim.  The previous owner used flat paint which really sucks for kitchens and baths - it shows dirt and is hard to clean.

And there is a list of things "to do" as well.  We need to replace the carpet in the bedrooms (cheap contractor grade, now worn out) with engineered hardwood floors.  The Pacific Electric power panel needs to go away as well - they are a fire hazard, and the panel is maxed out.

The garage ceiling needs to be painted, as the paint is peeling (paint type mismatch, or improper prep by the previous painter) and the garage floor after 50 years could use a coat of paint as well.

Oh, the joys of home ownership!

But let's get down to sinks, the topic du jour.   You'd think a sink was a pretty static thing.  You turn  the taps, the water comes in, and then it goes down the drain.  Few moving parts and nothing to service.   You'd be wrong about that.

It seems that modern faucets wear out, like anything else, about every 10-15 years.   In the old days, faucets had "packings" and washers that needed to be replaced and you could buy these parts for pennies at your local hardware store.   Provided the entire thing wasn't corroded into a single mass, you could disassemble the faucet and replace these wear parts.   Labor was cheap back then (particularly if you did it yourself) and parts were cheap.  A good faucet could last decades.

Like I said, in Goodyear Cottage here on the island, we have a bathroom that is probably over 100 years old.  The solid marble sink has the original brass faucets, which the authority repairs with new washers and packings periodically.   These things could last forever - or until they corrode into dust.

Modern kitchen faucets are fancier, of course, with single handles instead of the old "H" and "C" knobs.   And most use a plastic cartridge with rubber o-rings instead of rubber washers and packings.   and most are cheap enough that when they start to leak (either not shutting off all the way or spurting water up the handle or whatever) it is cheaper to replace the entire thing.  The parts are not cheap, but a faucet set can be had for the cost of one hour's labor of a plumber, who usually charges $100 just to drive out and look at your sink.

On the other end is the drain.   Old drain pipes were chrome-plated copper and while they rarely leaked, they tended to weld themselves together over time.   Modern pipes are PVC and have little plastic wedge-shaped gaskets that use compression fittings to assemble.  These can leak over time, but tightening them a bit sometimes stops this leak.   Over-tightening can actually make them leak more, as I have found out the hard way.   Once the plastic gets crimped and takes a set, it may no longer seal.  Also, the wedge-shaped (cross-section) rings can get compressed over time, and sometimes a new set of rings will help re-seal this nightmare.

Kitchen and bath sinks can leak.   Water can slop over the edge of the counter and drip down the cabinet face, ruining the finish and delaminating the wood.  Water can accumulate under a sink and cause mold and mildew.   It pays to inspect this area frequently and make sure there is no water at all under there and if there is any, clean it up right away, use some Chlorox spray to kill mildew and find the source of the leak.   If you splash water from a sink, use a towel to dry the cabinet face and make sure the inside of the cabinet is dry.

One mistake I see people make is to crowd these cabinets with things - soaps, toilet paper, whatever.   This makes it hard to see whether you have a water problem, and if you do, well, you only find out when you reach inside and find all your toilet paper is now Papier Mâché.

The Disposal (or Dispose-all) is an interesting beast, and largely an American one.   The idea of shoving food scraps down the drain and shredding them is indeed, oddly American.   In most parts of the world, the plumbing is inadequate to handle such solid matter.   And it remains solid for a long time.   My parents had a disposal in their lake house - which was on a septic system.   My Mother was quite fond of shredding lots of things and washing them down the drain, oblivious to the fact that these solids were filling up the septic tank.  A disposal and a septic tank simply don't mix.

The bad habit, which started when disposal units were first invented, was to scrape kitchen scraps into the sink where they would be ground up and washed away.   Potato peelings, leftover food on plates, and so forth would be send down the drain instead of going into the trash.  I guess it was the start of the idea that in the future we'd all have atomic incinerators and just toss things down a chute and they would disappear - the disposable economy.

Speaking of which, it appears we have disposable disposals.   They tend to crack, as I just discovered ours has, as many of the parts are made of plastic.   And I am not the only one.  This guy had the problem, as did this guy, this guy, and this guy.   It seems that the Insinkerator "Badger" brand is particularly prone to this, but maybe that is because they are the largest brand of disposals around.

UPDATE:  The photo of the cracked insinkerator that I originally linked to is now down, as are a lot of photos.  Has someone been grooming their image on the web?

The easiest thing to do is to just replace it with the same make and model disposal, even if it cracks every ten years.   This way, you don't have to dick around with the plumbing, as it will use the same twisting lock-ring as the old unit.   You could remove the disposal, but then you'd have to re-plumb the sink and have this awkward switch on the counter that serves no purpose.

UPDATE:  It literally takes ten minutes to swap out the disposal if you replace it with the same model.  So although the Insinkerater "badger" tends to crack after a number of years, it was far easier to replace it with the same make and model unit.  If I changed disposal brands, I would have to spend more money and time re-configuring the plumbing.   Or, if I just plumbed a regular drain, I would have had to spend more time and some money on plumbing parts - and again it would be weird to have a switch for a disposal and no disposal.

And since you can't wait a week for Amazon to deliver one, you end up going to Home Depot or Lowes and paying top dollar for it as well - $99 as opposed to $78.   Oddly enough they sell this unit in two sizes - 1/3 horsepower and 1/2 horsepower, with the spread in pricing being only about $15.  Both are the "badger" model, which seems to be the choice of contractors.

More expensive models are available - you can spend $300 or more on a disposal if you want to, but I guess that gets you an all-metal housing instead of plastic.  (UPDATE:  The fancier models have insulated cabinets so they are quieter.   Since we rarely use this, why bother?).   So what do you do?   Spend $300 on a fancy disposal that you rarely use and hope it lasts longer, or get the cheap one and just live with replacing it regularly?   I think this falls into the category of BMW Theory - the flawed idea that paying 2-3 times as much for something means it will last 2-3 times as long.

So we go with the $99 model.  (UPDATE:  Went with the $78 model.  What the heck).
However, if I end up building a house or remodeling a kitchen, I would just leave the disposal OUT.

UPDATE:  After removing the Insinkerator, which was a Badger Model 5 (1/2 HP) I noticed there are actually THREE CRACKS in the device.   What could cause this sort of cracking?    My theories are this:


1.  Bad plastic that is degrading over time, perhaps aided and abetted by the use of chlorine type cleaners or other chemicals.

2.  Clogs to the machine being cleared with a broom stick (as they taught us in the Boy Scout Manual) causes pressure to the inside of the plastic housing, which can later lead to cracks.

3.  The weight of the motor causing stress to the plastic, resulting in cracks.


Given #3, I am thinking that perhaps the 1/3 HP model might last longer, ironically, as the motor is lighter.  This thing is heavy, and that is a lot of weight to hang off the plumbing.  Plus, it's $78 instead of $99.  Cheaper is better, particularly for something we rarely use.
Newer Post Older Post Home
View mobile version