No One Cares What You Did 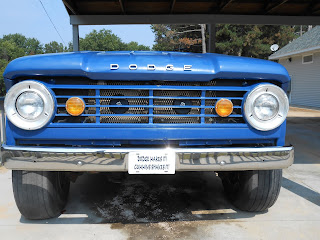 Once you retire no one really cares what you used to do for a living.

When we lived in Alexandria, Virginia, the topic of conversation at every party we went to, related to work.  The first question people would ask you, once you were introduced, was "what do you do?" by which they meant what you did for a living.  And as I noted in an earlier posting, if what you did was of no use to them (in terms of networking) they often would simply walk away from you in mid-sentence.   (The only other topic of conversation was, of course, where did you live and possibly what schools your kids went to - other methods of evaluating the "worth" of individuals in major metropolitan areas.   I am so glad to leave all that behind!).

But once you stop working and retire, no one really gives a shit what you did for a living, other than perhaps as a curiosity.

When you travel by RV do you meed a lot of interesting people.  Sometimes you can meet famous or quasi-famous people as well.  I was talking with a fellow next to us who was pulling an older fifth wheel trailer with a Dodge diesel pickup truck and I mentioned that I used to live in Michigan because that was his home state.  I told him I went to General Motors Institute and he said, "I have one up on you I went to Chrysler Engineering Institute."

And he certainly had one up on me. That was a very prestigious program back of the days when corporations engaged in corporate socialism - which I wrote about before.  The Chrysler engineering program was a master's program for people already had a degree in automotive engineering.  Only the best and the brightest were accepted to the program and received a master's degree as a result.

As Automotive Engineers went, this fella was the cream of the crop.  But not only that, he was very famous for two very important products that came out of the Chrysler Corporation - now the Fiat Chrysler Corporation - over the last three decades.  He was one of the folks instrumental in working out a deal with Cummins to install Cummins diesel engines in Dodge trucks.  Before that time, Dodge trucks were viewed as kind of dowdy and outdated.  But once they were updated with Cummins diesel engines, they became a hot commodity - flying off showroom floors for thousands over list price.

"Dodge makes it, Cummins shakes it" was the slogan.  He also was involved in reviving the "Hemi" moniker for Dodge, which has been very successful for them.  He left, however, when the AMC engineers and marketing people belittled his efforts.  He now runs his own business which is not automotive-related but shows up at Dodge/Cummins fan club events as a featured speaker.  It really was an honor to meet him.

Clearly, like most Automotive Engineers, he never made a pile of money from his work.  He did okay and has a nice pension and retirement but never became a superstar millionaire. Such is the fate of most Engineers.  He can take some comfort, as I told him, that he created a product which has become a cultural icon in America.  Few of us could ever be so fortunate - as Engineers.

It is like the last day of school in your senior year.  You're cleaning out your locker and throwing away all those papers that weeks before seemed so important - that book report, or final project, or exam paper which you got an A on.  At the time it seemed so important, but now it is just so much trash.  Suddenly, school is out and everything you strived for over the last 12 years means nothing whatsoever.  Nothing, whatsoever, period.  No one gives a shit what you did in High School, the day after you graduated.

And the same is true for your career.  And maybe that is why some folks claim they will "never retire" even when they can afford to do so.  Their job gives their life meaning and themselves status.  They are not just some bloke with some cash, but a profession and a job title.  This in turn generates respect, a form of status.   And if they quit that job or profession, they lose this status and respect.  And overnight, everything they did in their working lives becomes largely meaningless.

Jack Nicholson, as Schmidt, discovers that his life's work as an insurance actuary ends up on the loading dock next to the dumpster.   Depressing?  Perhaps.  Reality?  To be sure.

There are two ways to look at this.  You can be depressed about it or you can be liberated by it.  As I've noted before, the purpose of a job is to accumulate wealth so that you can live independently and not be beholden to others.  And this is not a choice but a necessity.  Eventually you'll become too old or infirm or develop dementia, and not be able to perform the tasks that you used to be able to do in order to make money.

When that time comes, you'll wish you had set some money aside so that you could live off the proceeds of your earlier labor.  Sadly, most young people today - or indeed in my day - believe that their incomes will continue to increase exponentially as they age, and that by the age of 65 they will be making a million dollars a year and be able to afford to do whatever they want to do.

The reality is, of course, that by age 55, you will be shown the door because you're too old, your skills are too obsolete, and your health insurance costs too much.  You can rail against the unfairness of this all, and vote for Bernie Sanders (who should have been retired long ago!  Talk about someone whose life's work amounted to nothing, right?) and hope that he forces companies to keep you employed until age 65.  However I doubt any of that is going to happen.  A better approach is to plan for the inevitable rather than pretend it doesn't exist.

For the best of us, the reward of a lifetime of work is a huge pile of money.  However, that happens to very few people.  For the rest of us, the best we can hope for is that we did something significant that is recognized by other people, such as with my friend who worked for Dodge.  He is known as "Mr. Cummins" among the Dodge diesel enthusiasts.  And that's one hell of an accolade to have in life - for an Automotive Engineer, anyway.

The rest of us will end up like Jack Nicholson in About Schmidt - having careers that earned us a decent income and a decent retirement, but that in the long term mean little or nothing in terms of our impact on our society - other than the slight nudge we might make on the gears of the mechanism that is our world. We will not be lauded or remembered much, particularly once we are gone.

Again, you can you view this as depressing or liberating and it is your choice how to view it.  Myself, I tend to view it as liberating.  A client recently contacted me by email asking me a convoluted question about priority claims of US patents in view of the various changes in the patent law since 1977.  At first, I was ready to jump in and research the issue and give him a concise answer as to how the laws have changed over the years and how the priority claims in the patent in question would be affected.

But then I realized that since my practice is closed and my malpractice insurance is no longer in force, I could not advise him even if I wanted to.  And what's more I realized I really didn't want to.  I didn't want to do the research, I didn't want to give him an answer, and I didn't want to be liable for making the wrong answer or making a mistake.  It was a very liberating feeling to say to him that while I wished I could help him, he should consult with an attorney who is currently practicing.