Pardon Me For Not Giving a Shit 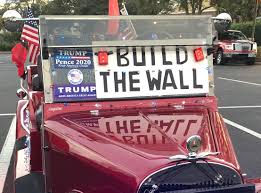 Is it a bad thing that I really don't care about "the wall" one way or another?


Lately, it seems that people in America are polarized over political issues.  Let me amend that - it seems, according to the media, that we are polarized over political issues.  Maybe people who spend a lot of time plugged into the Media (either Left or Right - it doesn't matter, just different flavors of the same bullshit) give a damn about all these "pressing issues of the day" but the rest of us, well, we could care less.

There are folks who feel they have to inflict the political opinions on you, and I don't hate them for that - they are just victims of this 24-hour news cycle.  They watch too much television and spend too much time staring at the smart phone (something I am trying to wean myself from) and think that being outraged at all times is the norm.

I learned this early on in my legal career, as I would meet clients from all walks of life.  Some wildly conservative, some wildly liberal - most middle-of-the-road or people who kept politics to themselves.  But the "politicos" always felt they had to raise their political views in a conversation and assumed that everyone in the room agreed with them.   And as their attorney, it made no sense to engage them in a political debate - you would convince them of nothing and lose a client in the process, the latter being something the partnership frowned upon.

So you say, "You may very well be right about that!" and try to redirect the conversation to the matters at hand, although they often resisted this and went back to politics.   Now that I am retired, I can afford to offend people by challenging their political beliefs.  But I have found that it is not a very rewarding thing to do. You rarely convince anyone of anything by challenging their long-held beliefs - all you do is piss them off.   But also, I have learned, over time, that no one side is really 100% wrong all the time and no one side is 100% right.   So you can be a right- or left-wing "politico" and spout the talking points of your rage group, and half the time, probably what you are saying is nonsense.   It just doesn't pay to get sucked into someone else's political agenda.

Take this wall nonsense.  Folks on the right chant, "build the wall!" as though it were the most important and pressing issue facing the country today (I would opt for the $22 trillion debt as a more pressing issue, but I am in the minority here).  Folks on the left say the wall will never be built - as if somehow extending and enhancing an existing barrier is going to be the end of the world.  The butterflies will not be able to migrate to Mexico!  Really?  They can't just fly over it?   Or even through it?   From what I've seen, it looks more like slats than a wall.   But I digress.

Both sides are full of it, methinks.   This stopped being about "the wall" a long time ago and became all about winning and losing.   It is like a fight between two small children over a toy.  They really don't care about the toy itself - that long ago stopped being the issue.  It is all about throwing a tantrum until you get your way and you are vindicated and the other side chastised.   What usually ends up happening - or should anyway - is both children are spanked and made to sit facing opposite corners.

I just don't give a shit about the wall, one way or another.  Build it.  Or not.  Who cares?  People on the Left say it won't affect "migration" at all - if so, why object to it?   People on the right say it will prevent "illegal immigration" - maybe so, or maybe not.   But shutting down the government and costing the taxpayers $8 billion in order to protest a $5 billion wall expenditure seems kind of nonsensical - and the fault of both parties.

The government shutdown - something else I don't give a shit about.  Oh, sure, there were people affected by this.  My brother-in-law couldn't sell his house because the buyer's FHA approval was delayed by a few weeks.  TSA agents didn't get paid (they actually pay those folks?) on time.   Some government workers living "paycheck to paycheck" discovered too late that leveraging yourself into debt and relying on a "job" to keep everything going is very short-sighted.   Sure, the press tried to get me to care, by profiling some government slug who couldn't pay their cable bill.   But it reeked of one of those one-sided stories, with lots of missing information.  It was just another attempt to get me outraged.

And that right there is the problem.   We are supposed to be outraged - and the articles are designed to make us outraged.  When I look at the "news" app (I am running an older version of the MSN app that for some reason blocks all the ads and sponsored content), I immediately have to discount anything from Fox News, Washington Post, New York Times, etc   I have to look at the source of the news before reading it, so I know in advance what narrative they are trying to sell me.

But lately, it seems to me that maybe no narrative at all is the best way to go, and the best way to do this is to not read the news or watch it whatsoever.   When we travel by RV, sometimes we are out of communication for days at a time.  There are places in the United States (believe it or not) where there is still no cell service.   In Canada, particularly so, once you get more than 100 miles North of the Border (and unless you have a rocking roaming plan, you might not get service in metropolitan areas in Canada).

What we find is, that after being "off the grid" for several days, that several "news cycles" have gone by and we missed being outraged by one thing or another.  It is almost comical to try to "catch up" on the news, as since you missed the original story, you have no idea what the subsequent stories are about - often the "journalists" of today write as though you have been breathlessly following this nonsense (and often it is nonsense) for weeks on end.  I end up getting a lot of my news from Wikipedia as a result - as historic events rather than late-breaking news.

And maybe this isn't such a bad thing.  We only find out weeks, months, years, or even decades later that what the press reported was all wrong.  I pointed out before that on the 10th anniversary of the Columbine massacre, we discovered that pretty much all of the "narratives" the media put forth following that tragedy were basically fabricated from whole cloth.  It was just two mentally ill teenagers with guns - and as a result, the tragedy has been repeated time and time again.

And maybe that is the danger with being outraged all the time - it skews our perceptions and prevents us from seeing what really is going on.   One group of people wanted to characterize it as two kids being "bullied by jocks" as that fit their narrative about school bullying.  Another group spread the story that "Christian" students were targeted by the duo, each asking first, "Do you believe in God?" before firing at those who said "yes."  We all want pat answers to complex questions, and we want reasons behind these sorts of events.  And the news media, acting on rumors, often provides us with what we want to hear.  This, in turn, prevents us from hearing what we need to know.

Maybe ten years from now this wall thing will be put into perspective.   I can see four possible outcomes.   In a first scenario, they build the wall and it turns out to be a white elephant.   It does little to deter illegal immigration (walls can be scaled, jack-hammered, tunneled under, and even blown up), and in retrospect it was just a waste of time and money.

In a second scenario, the wall turns out to be effective in deterring illegal immigration, but does little to deter the tens of thousands of "asylum" seekers who bypass the wall and go right up to the gates and ask for asylum.

I suspect that what will actually happen is that parts of the wall will get built - near populated areas and places in the desert where illegal immigrants are already known to cross.  But in places like Big Bend National Park - which is a desolate place that is basically inaccessible from Mexico - there will be no point in building a wall.  There is a town on the Mexican side, Boquilles, which has its own unmanned border entry to America - for the simple reason that there is no other way to access Boquilles than from America.  No one is smuggling people through that checkpoint, as there is no way to even get to the Mexican side from Mexico.  I doubt the wall will get built there, or if it does, it will be the last place to see it.

I think what will happen is that the wall will be partially effective - there will always be the climbers, the tunnelers, the drillers, or whatever, who get around or over or under or through whatever wall you build.  And hopefully, over time, economic conditions in Central America will improve to the point where floods of people won't be "migrating" to America - although this seems less likely.

But whatever happens, it will happen without my intervention, other than who I vote for and whose political party I donate money to.  Being upset 24/7 over this will accomplish nothing, other than to raise my blood pressure and shorten my life expectancy.  Being outraged by it all really accomplishes nothing.
Newer Post Older Post Home
View mobile version