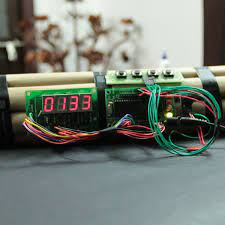 Kids these days with their fancy store-bought bombs.  The old ways are best!

I know it is probably sacrilegious or inappropriate, but I was thinking about this wacko in Colorado and his completely whacked family.  Apparently, a few years ago, he threatened to blow up his family with a "Home-Made Bomb" and was charged with a felony and then the charges were dropped and they gave him guns back.  You know, sometimes those SWAT teams should be more obliging when someone wants to commit suicide-by-cop.

But then again, Colorado Springs.  The armpit of Colorado - well, that and Aurora.

But what got me going was the use of language, once again.  "Home-Made Bomb" - are there any other kind?  I mean, outside the military, most bombs are indeed "Home-Made".  They don't sell them on Etsy or even Wish.com.  You can't find them on Amazon or eBay.  I tried WalMart - you would have thought, right?  My "app" said they were halfway down Aisle E17, but when I looked, I didn't see anything.  I even checked the overstock up top!  Nothing!

No, you can't buy a "store-bought" bomb and thus all bombs are home-made.  And quite frankly, this is probably a good thing.  We need to stick to traditions and time-honored craftsmanship.

What's Thanksgiving, after all, without a home-made bomb?

(UPDATE: It occurred to me that yes, it would be possible to have a "factory-made" bomb if you broke into a military facility and stole one of theirs, I suppose.  I doubt that happens too often.  At best, someone makes off with a hand-grenade, not a full-blown bomb like you'd drop from a B-52.  For the most part, "Home-made bomb" is a redundant term.)

The media is lazy and they like to use phrases like "home made" to run down something or make it appear trivial.  But home-made bombs are just as dangerous, if not moreso, than the store-bought variety.  The Oklahoma City bombers blew up a whole building with a "home made" bomb, and a few years back, some idiot blew up an entire block in Nashville with a similar device.  A bomb is a bomb, regardless of who made it or where.

The media loves this term "home made" when it comes to airplanes.  Under the law, you can assemble your own aircraft (called "homebuilt" not "home made") and such airplanes are can be just as reliable and safe as anything coming from Boeing - perhaps moreso, as of late.  But if one crashes, often due to pilot error, the media is quick to say it was a "home-made" airplane, as if it was assembled from cardboard and bailing wire by a crackpot Uncle in his garage - and was inherently unsafe to fly and probably illegal as well.

Actually, the lack of information in news stories is astounding.  Editors snip out "facts" as being too confusing or distracting.  So in a plane crash story, they say "A single-engine aircraft" crashed, instead of a Cessna 150.  The photo in the article shows the N number and you can look that up on flightaware and see the flight path of the plane, who owned it, and a host of other information. But nah - readers aren't interested.  And that is why the "mainstream media" is so distrusted as of late.  A mass-shooting occurs and the real story is often discovered online days or weeks before the media picks it up.

Now, granted, the Internet often gets this wrong - for example, after the Boston Marathon bombing, people on Reddit "doxxed" innocent folks who were harassed online (and in person). The Atlanta Olympics bombing did this without the help of the Internet - as local law enforcement latched onto the wrong person like a dog with a bone and refused to consider other suspects.  They ruined his life, to this very day.  So I guess it is a game anyone can play.

So yea, I get it.  The media is a little gun-shy after getting it so wrong so often.  And online tips can be horribly wrong, again and again.  And there is little reason for the rest of us to "know now" rather than later, when facts are established.  10 years later, we'll know what really happened, when it becomes settled fact and not mere speculation on the ground.

But "Home-Made Bomb"?  I think we need to put that term to bed.  A bomb is a bomb.  Doesn't matter where it's made.  And anyone with a bomb who isn't in the military, by default has a "Home-Made Bomb."