What Happened to Vacuum Cleaners? 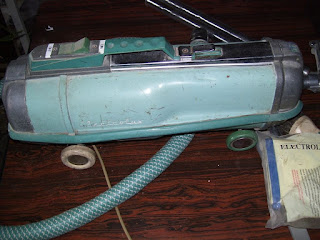 My Mother had an Electolux like this from about the time I was born.   She's dead now, but the vacuum is still running.   Why don't we make products like this anymore?  There is a reason.


I am feeling older and older these days.  I go to the store to buy something and find out they no longer make it.  What's worse, I cannot fathom or comprehend the products they do sell.   Take vacuum cleaners, for example.  Today, everything you see at the store is a "bagless" cyclone-separator type of cleaner.   You'd be lucky to find maybe one bag-type cleaner at the local store.   The only good thing is, if you find one, it is usually the cheapest one - less than $100, sometimes less than $50.


This Wal-Mart Bissel bag cleaner is $42.  Pretty amazing, but I don't think I'll be leaving it anyone in my will.

We presently own three of them, well, four if you count a small RIGID shop-vac we also own.  Well, that and a 12V unit in the camper.   We had an old GE canister vac - actually two of them, and I have been patching them together for years now.  The last one is on its last legs, missing a wheel and the wiring sort of cobbled together.  When we run out of bags, it will go in the trash.   We bought the Bissel above as a stop-gap measure.  A friend gave us one of those "cyclone" vacs and it works OK, I guess, but it is not really "bagless" as there is a filter you have to replace occasionally.   The cyclones are fine, but they seem to be limited to upright models - the canister vac is a casualty of the move to bagless vacuums.

We are a wealthier nation today than in the past.  Like I said, my Mother had that one Electrolux she bought in 1966, and as far as I know, it is still in the family.   She would take it to be repaired by the local vacuum cleaner repair man, who had a shop in a shed behind his house in a bad part of town.   He was like the lawn-mower repair guy - another aspect of a bygone age before disposable appliances - a person who made a living in the margins, and maybe a little creepy as well.

Mother did also have a "Regina Electrikbroom" but that never worked worth squat.  It had a hand-held mode to work as a primitive "dust buster" but it never worked very well.  You may remember it from About Schmidt as the vacuum Schmidt's wife was using to vacuum up spilled sugar when she had a stroke and died.  And no wonder, too - those things blew dirt around more than they vacuumed it up.  I remember taking it apart once and noting that the "fan" had flat blades that were not angled at all.   It didn't create vacuum, but rather just moved air around in a circle.  It was almost like they intentionally designed it to be shitty to punish customers for buying it.  Sort of like how GM used to build small cars.

Today, we have shittier appliances that you can't repair (despite my attempts to fix the GE canister vacs) as parts are hard to come by, or are so expensive as to make repair simply an uneconomical proposition.   For that reason, it doesn't pay to spend a lot of money on an appliance, if it can't be repaired economically.  Why buy a $500 vacuum that you can't get parts for and can't find anyone to repair, when a $100 vacuum works about as well?

And as I noted, today, you can spend an awful lot of money on vacuum cleaners, with decidedly mixed results.

The Dyson guy annoys me.  Yes, I said it.  For some reason, people seem to think anything advertised by a dude with a British-y sounding accent must be good.  After all, we are talking British technology here!  The same people who brought you the ultra-reliable Triumph and the Jaguar.  Lucas electronics - what could go wrong?   Yes, I am calling for a Fatwa on the Dyson guy.  It is time for him, his over-done accent, and his cyclone plastic crap to go away, for good.

The problem with these "cyclone" bagless cleaners is that instead of removing a bag and tossing it away, you have to spend hours cleaning the vacuum and replacing the filter.   Yea, they got rid of the bag - big deal.  In its place, we have a filter.   Cyclone dust separators are nothing new.  They swirl the air in a circle and centrifugal force (or centripetal acceleration, take your pick) forces the dirt particles to settle out.  If you go by any large factory you will see huge dust separators like this.

Problem is, they don't settle out the very fine dust particles.  So you need a fine particle filter to get those.  As a result, you have to buy an expensive filter, instead of cheap bags.  This is progress?  Instead of tossing a ten-cent paper bag after each use, we spend an hour cleaning the damn thing and then every ten uses, replacing a $15 filter.   I am not sure this is saving money.

And the dirt collection chamber gets pretty nasty pretty quickly.   So you have to take it out and wash it - along with the rest of the mechanism.   It is hard to clean and it is a nasty job.  Instead of remove-and-toss, you have to get up-close-and-personal with your old dead skin cells (and those of your friends and your dog).    If you have allergies, a cyclone vacuum isn't your best friend.

But that being said, this is the modern world and you'd better get used to it, buddy!   Sure, your old computer programs worked great in DOS and you actually got shit done.  But today, you have to run Windows 10 and rent software in the "cloud" on a machine that is 1,000 times more complicated and takes 10 times longer to do the same damn things.  Get with the program - whether you like it or not!  Cyclone vacuum cleaners now predominate, so goodbye to the canister vac (whose head would actually reach under your bed all the way to the middle!) and say hello to Mr. Cyclone, who can barely vacuum 6" under the bed.   Progress.

Of course, the big thing today is the robotic vacuum.  When these first came out, they were sort of a joke - little more than carpet sweepers that ran around in a random pattern, they tended to get stuck if you had throw rugs or worse yet, oriental rugs with fringes.   They really didn't work very well, and most people I know who bought them ended up putting them in a closet after playing with them for a few months - and getting out the traditional vacuum and going back to square one.

They have improved since then, getting larger, heavier, and more complicated.  Supposedly they have fixed a lot of the problems from the past, but I wonder how they handle fringes on oriental rugs.   There are still issues to be resolved, particularly if you have pets.   Apparently, if your dog or cat poops on the rug while you are away, the robotic vacuum not only will not clean it up, but smear poop all over your house while you are gone.   A vacuum cleaner should clean, not make more dirty, and it should never create a mess that takes hours, if not days, to clean up. The futuristic promise of the robotic vacuum has yet to be realized.

We don't have any pets anymore, but I am not running out to buy a $500+ robotic vacuum anytime soon.    Even with the advances in technology, they are more of a supplemental cleaning aid, not a replacement for traditional vacuuming.   I suppose if you lived in a minimalist house with wall-to-wall carpeting and little or no furniture, they might work OK - but even then, their round shape means the corners will always have piles of dust you must manually vacuum.

I am not sure what the point of all of this is, other than it seems that sometimes "progress" is less than progress, but merely just change.

UPDATE:  A reader recommends Oreck upright commercial vacuums, which are about $135 on Amazon and use bags.   They do lay flat to go under furniture and beds.   I didn't mention in my posting, the trend of built-in-vacuums which was oh-so-popular in the 1990's, along with Subzero refrigerators.  The sort of thing promoted by This Whole House.  A vacuum cleaner built into your house - what could go wrong with that?  And it certainly wouldn't become obsolete, right?

Another reader recommends the "Henry" canister vac, although I am not sure if it is available in the USA.  It does not appear to have a beater bar, although he claims it works well in his cleaning business.
Posted on November 27, 2017