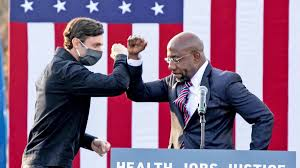 Democrats did a lot more things right this time around.  But it could stand improvement!

The election is over and now the endless recounts and accusations of fraud begin.  Situation normal in post-2020 America.  Thanks Trump!   It looks like the Democrats squeaked out a narrow win, but it will be the end of the week before the overseas military votes are counted - but even if they are 100% for Republicans, it doesn't appear there are enough votes to turn the tide.  We'll see.  A lot can happen in the coming weeks - including a military coup attempt.  Keep our fingers crossed and hope the people in the right places do the right thing by the Constitution.

Hillary lost in 2016 because - in my opinion - she did a lousy job of campaigning.  Her advisers thought that big-money donors and heavy advertising would do the trick. Meanwhile, Donald Trump did an old-school campaign, with lots of rallies and lots of small donations from supporters - who bought lots of Trump merchandise.   He got out the vote, whereas Hillary didn't bother to campaign in many of the important swing States.

That's the real point of small-money donations - not necessarily the money itself, but the resulting engagement  you get from voters. Obama made a lot of money from small donors, but more importantly, he got a lot of votes that way.  When you donate even $20, you have skin in the game and will get off your ass and go vote, rather than say, "my favorite TeeVee show is on, I'll vote later!"  Trump got those small donations - and got votes in key States as a result.

The Biden election was a little better run. Due to the pandemic, Biden didn't do much in-person campaigning or rallies, but still won - which says a lot about how much people despise Trump.  But they did do a better job of engaging people through social media, texting, e-mails, and so forth.  They also did a much better job of door-to-door work, registering voters and getting out the vote.  "What is your plan to vote?" they would say - getting people to understand when and where they could vote, and getting them to think about a specific day they were going to go.  Otherwise, it becomes like a New Year's Eve resolution to quit drinking or lose weight - vague promises that go nowhere.

That being said, there was still an awful lot of reliance on big-money donors, PACs and attack ads, on both sides of the spectrum.  I am not sure these ads sway many voters or convince the "undecided voter" to go one way or the other. They all sound like lies to me, but I guess these "undecided voters" who either "don't follow politics" or think "the candidates all seem the same to me" are dumb enough to be swayed by them.

The problem we have here locally is that since we are a largely Republican county, our local representatives and House representative are Republican.   The Democratic party doesn't want to spend a lot of resources, particularly in off-year elections, on non-Federal elections that they are going to lose anyway.  Better off to spend that money winning a House seat in the Atlanta area, or local Statehouse seats in more Democratic districts. So we get neglected a lot, even though our votes help with Presidential and Senate elections - as recently illustrated.

We had a local rally for Democratic candidates at someone's home.  I wasn't invited, and found out about it only after it happened. I think they limited the invites to Facebook friends, and sadly, the Parcheesi Club Effect occurs here - people want to run these things as private clubs, not as a get-out-the-vote outreach.  The person who held the party used to do an "open house" and a friend of mine who wasn't in the Parcheesi Club went once, and the host said, "What are you doing here?" which is an odd thing to say when you have an "open house" - or maybe they don't understand the term.  Poor manners in any event.

But that sort of mentality has to go away in order to win elections.  You can't win an election with just you and five of your club members. Sadly, the far-left really doesn't understand this - often having "purity tests" and spending more time throwing out their own members than fighting the opposition. The "big tent" of the GOP may be a sad joke today, but in the past, they have tried to include a panoply of people - realizing that their core conservative support represents a minority of opinion.

So, instead of going door-to-door and asking people to put up Biden yard signs, the local Democratic supporters put 20 signs in their yard, on a house on a side street.   This doesn't make it appear support for Biden was broad.  Rather, it made it seem that only one person supported Biden - and that person was unhinged.  I mean, 20 signs?  Spread 'em out!

Door-to-door engagement is what gets out the vote.  A good campaign should engage people and set up a hierarchy structure for each County, which in turn sets up block captains for each neighborhood, who in turn buttonhole each potential voter.  That is the way the "machine" used to do it in the days of Harry Truman and before that, Tammany Hall.

You may say political machines were evil, but they knew how to get out the vote, even from the cemetery.  Today, despite Trump's allegations, getting dead people to vote is nearly impossible. There were a few during the last election - all were caught, and oddly enough, all were people trying to swing extra votes for Trump (hey, anything to win - that's the Trump motto, right?). But a machine-like structure is needed to corral voters and understand your demographics.  Relying on polling data has clearly been illustrated to be a poor strategy.

In the run-up to yesterday's election, we did see something like this, but not on a local level.  Rather, I was getting phone calls and text messages from people as far away as Hawaii.  This wasn't a personal door-to-door approach, and granted, with CoVid, that is harder to do.  But we did have one door-to-door person come visit us - all the way from Washington, DC.  There are, of course, people here on the island that would have done that - and probably more effectively - but no one asked us. There is no local organization, other than the private Parcheesi Club aforementioned, and they seem only to want to get together and gossip and grouse about Republicans - and then magically expect to win elections that way.  Or maybe they are so used to losing elections here in Georgia they don't bother trying.  Maybe that is about to change.

One place the Democrats are really dropping the ball is in selling merch - merchandise. Trump was a marketing genius (or someone in his campaign was) with the "MAGA" hats and yard signs and t-shirts and bumper stickers - all sold at a profit, with some of that money actually going to the campaign (and I am sure, some into Donald Jr.'s pocket).  It is a good strategy - you raise money and raise awareness and create engagement.  The guy who spend $25 on a donation and got a MAGA hat - which he wears, daily, is very likely to vote.  He is engaged in the process in a way that a voter who is inundated with attack ads is not.  The later may get around to voting - probably.  But something comes up and they forget.  It's not that important, right?

The Democrats need to take a page from the Trump playbook and sell more merch.  But chillingly, I run into a lot of people who are afraid to put up a yard sign, attach a bumper sticker, or wear a hat or t-shirt for fear of being assaulted or their home or car vandalized.   This is how far we have come, and sadly, it seems that their fears are justified.  And yes, there have been examples of people on the left stealing MAGA signs and whatnot.  It's wrong no matter who does it.  But if enough people display these signs and stickers, the stigma of being a Democrat will subside.

This time around, the same effect occurred, which is why Trump supporters and Trump himself seem mystified as to how they lost - after all, "everyone" supported Trump, right?  The reality was, of course, that most people despised Trump and most people voted against him.  But those folks weren't putting Biden stickers on their cars or wearing Biden hats or flying Biden flags. It not only was a lack of enthusiasm for Biden, but also that Biden supporters are less likely to be drawn into a cult of personality.  Even Obama struggled in this regard - and he won by a far larger margin.  Wearing Obama merch was a sure way to get hassled. And that is sad to say, but true - people are willing to resort to violence today over politcal issues, and today's political issues are hardly worth fighting over.  It's not like we are arguing over integration of public schools, the abolition of slavery or independence from Great Britain.  Today we are arguing over.. I forget.  Trade with China?

What turned Georgia from a Red State to a Blue one? Well, it has and it hasn't, to begin with. The Republican Party in Georgia still has a firm grip on the Statehouse - at least for the time being.  But the increased urbanization of America is one reason - the population of Atlanta can out-vote the rest of the State, particularly when combined with Savannah and other coastal cities, college towns and other Democratic enclaves.   But as in the South during reconstruction, the forces of evil are not going to go away without a fight - perhaps even a physical one, as we may see today.

The other half of the equation, though, was Trump. Just as he elicits a strong reaction from his supporters, he elicits a strong negative reaction from his detractors. It is the same thing that sank Hillary's chances - she had a lot of people who hated her guts, and her support was fairly mild, even among Democrats.   You can win with mild support - Biden illustrates that.  But you can't win with high negatives - which is why the GOP has been a one-note Johnny about Hunter Biden. The GOP in a Post-Trump era could erase that negative perception, particularly if the Democrats do win the Senate and then go off the rails in the next two years.

We can only hope the GOP continues to embrace Trump.  He does get out the vote - for Democrats!

But from my perspective, I think the Democrats need to concentrate on a better ground game - get people to engage people, instead of relying on Facebook and YouTube attack ads.  Once CoVid is over, the Democrats need to do rallies and whistle-stop tours that engage people on a one-to-one basis.  Bill Clinton turned around his failing campaign in New Hampshire only because he got out there and shook hands with people. The most often cited reason for voting for him was having met the candidate in person.   It is a powerful thing, this engagement.

Build that network, sell that merch, do those rallies - get people engaged and you can win elections.  Rely solely on big-money donors and expensive attack ads, and well, I think you could lose.  And the mid-term elections will be here before you know it.  And if the recession I think is coming comes between now and then, well, the GOP will have no trouble selling the "Biden Recession" message to voters.

The election is over.  But in a way, it has only started.  The 2022 election begins today.  Control of the House and Senate will once again, be in the balance.