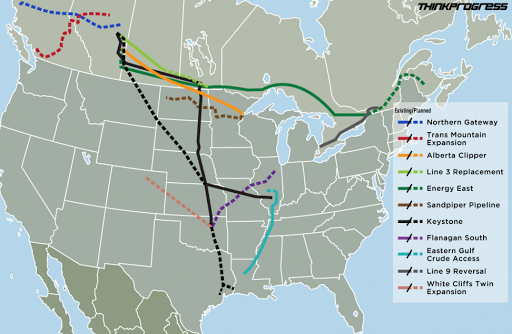 Cancelling the Keystone XL isn't exactly the end of the world, nor will it save it.

On the first day of his administration, Joe Biden signed a number of executive orders, which, among other things, ended the so-called "Muslim Ban" and also revoked the permit for the Keystone XL.   I don't agree with everything Joe Biden stands for - or the Democratic party for that matter - just as my single-issue-voter friends didn't agree with Donald Trump about much except abortion.  A lot of conservatives right now are puking in their morning coffee at the politcal correctness of the new administration - a rainbow of colors in the cabinet and even a transgender person!  And yes, it is all a bit of posturing silliness, designed to appease the voters, but not necessarily accomplishing much.

Biden just has to hope that some immigrant from a "Muslim" country doesn't commit an act of terror, or the GOP will never let him live it down.  The Republicans latch on to things like that - even if there is no "there" there - like a dog with a bone.  Benghazi!  Benghazi!  Benghazi!  Say it often enough and maybe it will actually mean something.   But that is how the political parties work these days - using innuendo and catchphrases (can we put "-gate" to rest now?) to rile up the troops.

The Keystone XL pipeline is a case in point.  And I suspect that economic politics are more at stake here than environmental ones.  In short, environmentalists and "activists" are being used in what is, essentially, a cross-border economic war.

I wrote about this a long time ago, and illustrated that it really is a pretty small addition to an existing network of pipelines.  And actually the Keystone pipeline was already built and is up and running.  The "XL" or Stage 4 is just an addition to this network, albeit a large addition in that it would double the flow of tar-sands oils into the USA.  This could amount to nearly a 10% increase in the amount of oil available.  We currently use about 9.7 million barrels a day (!!!) and this pipeline extension would increase this by 800,000 barrels.  Sounds like a good deal, no?

Well, even some Canadians are against this, arguing that it would help the US, but not provide many jobs to Canadians, as most of the construction would be in the USA. Not only that, with cheap fracking oil depressing prices worldwide, it is not clear that the project - now backed by the Canadian government, in part - would pay itself back over time.

Canada does find itself in a conundrum here.  Their economy is based more and more on exporting raw materials - tar sands oil, natural gas, softwood lumber, hydroelectric power, and so on and so forth. My Canadian friends like to regale me with how great their quasi-socialist safety net is, but fail to realize, I think, that the whole thing is propped up on exports of raw materials.  What happens when Nanook runs out of whale blubber to sell us?

The tar sands are a particular nightmare.  We drove by there a couple of years ago, and the project is massive (you really can't get near it, but you can see it from even very far away).   It also is very messy.  Canadians pride themselves on their environmental friendliness, and yet this tar sands project makes fracking look green.  So there is opposition, on environmental grounds, on both sides of the border.  But the Canadian government realizes that without a ready market for its dirty oil, their massive investment in this tar sands project will come to naught.

American oil producers are less enthusiastic about it.   With the collapse of world oil prices, the economics of fracking have come into question.  Hundreds of small oil exploration and support companies have gone belly-up in the last few years.  It is like the gold rush - many went out to the Bakken to seek their fortune, few found it.  The remaining companies are snatching up assets at fire-sale prices, and finding that once highly-paid field workers are willing to fight each other - often literally - for the scarce remaining jobs.

I suspect some oil producers would not be too keen on dumping an additional 10% into the oil market in the USA.  This may be more about economics than environmental politics.

Funny thing, as an aside in that posting, I noted about now former Senator Al Franken:

And this from the guy who laughed about a gay man being beaten to death, and made his living doing gay jokes on Saturday Night Live.
I just don't trust the guy.  But that's another story.

Hey, even a stopped clock is right twice a day!  Turns out, he was a creep.    But I digress.

The point is, it is day one of the Biden administration, and already he has done things I would not agree with.   But being mature means realizing that no politician is going to agree with you 100% of the time, and vice-versa.  The only exception to this rule are people - like the MAGA-hat people - who blindly follow a leader and don't even understand his real policies, but instead follow the speeches and slogans.

These same folks will go on about how Trump "cut their taxes" but in fact, cut taxes only for the very wealthy.  If he had followed through with his threat to cut the payroll tax, that might have put a few dollars into the pockets of the working man in the short-term, but bankrupted Social Security and Medicare in the long run.  Massive deficit spending sounds great, until you realize that it will fuel inflation over time - which we likely will see in the coming months, if not already.

Joe Biden will do a lot of things in the coming months and years that will no doubt piss off one constituency or another - this is to be expected.  You can't get everything you want out of a politician, you can only hope that what you do get offsets the things you didn't want.  I can live with rainbow-fart political correctness, as it is just window-dressing designed to appeal to the plebes, much as Trump's bombast was designed to appeal to his "base."   The Keystone XL isn't a hill I'm ready to die on, and apparently it wasn't even one Trump was prepared to risk fighting for - after all, during the four years of his administration, construction hardly even got off the ground.