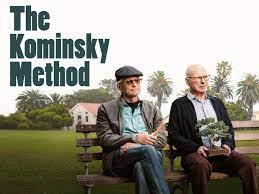 Not even old people want to watch a show about old people.

Two shows on "television" - which today encompasses everything from traditional over-the-air TeeVee to Cable, Pay-per-view, streaming, YouTube, Tik-Tok or whatever - gave me an interesting insight into the nature of television.   Well, that and being at a bar at a campground that was playing not one, but two televisions with the sound off.

At one point, they were playing an Owen Wilson Rom-Com on the left Tee-Vee and "Straight out of Compton" on the right-hand one.  I thought about the normative cues that each of these movies were presenting - how one should behave if one was black or white, and the contrast was pretty amazing. Sadly, no one got shot in the Owen Wilson Rom-Com, although we were all hoping for it.

The next day, they played a marathon (apparently) of "The Office" - which, like so much American television, was a rip-off of a British show that was much better the first time around.  I found "The Office" to be unwatchable, particularly with the sound off and the closed-captioning on.  The dialog was infantile - stupid, really.  I couldn't find the humor in it at all, but perhaps there's something wrong with me.  Everyone else seems to find it the height of hilarity.

But it got me thinking - again, a dangerous pastime - that television shows are aimed at the young, or in particular, that sweet demographic of 16-35 year-olds, who will spend their last dollar and borrow a dollar more, in order to be accepted by their peers or to achieve status.  We all fall victim to this, of course - it is the nature of youth.  Well, perhaps not all of us - we despise those in our peer group who resist the siren song of commerce and figure out how to get ahead.  Worse yet, are those who figure out how to make money out of our insecurities and those are called marketers.

Getting back to television, two interesting shows that came out on Netflix in the past few years were Grace and Frankie and The Kominsky Method.  Both were situation comedies, but starred veteran older actors.  They were old and played old, and it was refreshing to see a television show about older people for a change.   But of course, that wasn't to last long.  I am sure the "suits" from the network had some "notes" and suggestions for change.

And change they did.  All television shows basically suck after the first three seasons.  At that point, they fire the good writers (who want more money, but never get it) and hire network hacks who use the same tired old gags that have been on the air since Uncle Milty's day.  The networks rely on the fact you view the show as "comfort food" and aren't as interested in plot or character development, which they need to rope in viewers early on.  So M*A*S*H goes on for 400 seasons, with the same plots recycled, and Fonzi jumps the shark on "Happy Days" which lasted longer than the actual 1950's did.

With Grace and Frankie, the shift was subtle.  The children of the primary characters, who were largely in the background in the first few seasons, become the focus, much as "Jerk-ass Homer" did, after the first few seasons, where the focus was more on Bart and "Cowabunga!"  The plot lines involving Jane Fonda and Lily Tomlin became less mature and more "zany" - like in The Office. It wasn't too subtle, and I stopped watching it after the second season.  But like any good cash-cow, they can't afford to kill it off, even as they slowly smother it.

The Kominsky Method similarly starred two veteran aging actors - Michael Douglas and the underrated and underplayed Alan Arkin. Again, initially, the focus was on the two oldsters, but soon enough, they started bringing in younger characters - the students at the Kominsky school, Douglas' daughter, and late in season two, Arkin's long-lost son.  A romantic plot line with an older woman was dropped for season three, and Arkin wisely noped out of the deal. No word as to why he quit - his contract was only for two seasons.  Some say they didn't offer him enough money, others say he always planned on doing only two seasons.  I think the third reason is that he saw where the show was going - away from the given-and-take between Douglas and Arkin, and more into zany sub-plots involving the younger characters.  Leave on a high note.   Well played, Arkin!

Of course, old people love to watch television, as many will be quick to point out.  That statistic may be misleading in a number of ways - as most statistics are.  To begin with, such statistics are usually based on surveys, and people are not always honest about surveys.  Older people tend to answer surveys more, and maybe more straightforward about their viewing habits - and don't consider them to be habits, either.  Of course everyone watches television! - at least in their era, and radio before it.

Younger people might claim not to watch television, but of course may not count YouTube, Tik-Tok, or streaming services as "television" at all.  "I don't watch television!" they say (as I say, too) "But I streamed the whole two seasons of The Mandalorian last night!"

I think also, old people tend to watch different television than younger people.  Just my gut reaction, but old people are your target audience for Fox News and the plethora of crime shows.  The latter, I think, are also watched by younger viewers, particularly women.  Yes, women watch more tee-vee (or admit to it) than men do. Or maybe again, this statistic is misleading, as in the rest home, women outnumber men about five-to-one.

But all of that is irrelevant.   Who is watching is less important than who it is aimed at.  Networks want viewers who will buy things - the things advertised on traditional commercial television.  When people say they "don't watch television" - as I do - that's what they are talking about, commercial Tee-Vee.  Once you've been off the leash of the antenna and the cable, it is hard to go back to the 22-minute format of network television with its constant interruptions.  Some cable channels, such as the inaptly named "History" channel, have almost 50% of airtime devoted to ads.  It is painful to watch such dreck, particularly on a streaming channel where the ads are stripped off - most of the airtime is spent re-hashing what was said before the commercial break.

But ads sell television and marketers love the age 16-35 demographic, where you can snag a young unfinished mind (which doesn't stop developing until about age 25) and make them "brand loyal" to a type of lite beer, a pickup truck, or (back in the day) brand of cigarettes.  Sell them the idea that wolfing down enormous amounts of bad food is "normal" and you've got a customer for life.  That was the other thing I took away from watching these silent TeeVee's at the bar - how many of the ads were for restaurant food, and in particular, delivered food.  People - obese people - were shown wolfing down enormous portions of very bad food, and shown dancing and happy and exuberant.  It wasn't too subtle, particularly with the sound off.  Get the door - it's Domino's!

Gross things, too.  We argue about whether marijuana should be legal, but at the same time, you can legally buy, at the "Taco Bell" a "taco" with a shell made of Doritos.  I mean, that is unhealthy and arguably deadly, over time, and yet freely available, even to minors - without their parents' permission!  Of course, if weed is legalized, expect Taco Bell to sell even more of these abominations.   Marijuana is a gateway drug - to fast food.  But I digress.

Getting back to demographics, old people don't buy things, and/or their brand loyalties are already embedded, so there is little point in marketing to them.  And if you watch news shows, it isn't hard to figure this out - the advertisers for news programs tend to be AARP and prescription medications you might think you need. On the other hand, for "The Office" it was all Chalupas from Taco Bell and delivery pancakes from iHop via Doordash.   You can sort of suss out who is watching based on the ads.

So even though old people watch television more, they are not the "target audience" for much of it.  The target audience is depressed younger people who hope to spend their way to happiness, with a new leased car, or a new cellphone plan, or maybe even just one delivered fast-food meal, tonight, which will make them happy for about ten minutes, and miserable for a lifetime.

Getting away from television is important.  And one reason I was so fascinated by what was being shown on these silent TV's was that I haven't watched such shows in so long.   I had forgotten how the programming was so infantile (back in the day - Gilligan's Island?) and how the ads were about as subtle as a sledgehammer.  Watching as little as possible of this stuff - or none at all - is the best bet.  But if you do watch it, examine it closely and critically and realize what the real message really is.  Be passive, be goofy, be submissive, and keep on consuming!  Be like your peers!  Talk only about your "favorite" television show!  Didya see what they did last night?   Funny!

And there are people like this, too.  And it is uncomfortable to talk with them, when they ask what my favorite television show is, or did I watch the latest episode of a reality program or some judging show -which I had never heard of.  Worse yet, is when they talk about the characters on the show as if they were real people or their real friends. "That Rachel!  She's such a bitch!"  She's a character, played by an actor.   And that character isn't "a bitch" - it is just lines written for the actor by writers.   Yes, we all know this, deep down, but we get drawn into these shows - comfort food again - and let it slip right by our brains.

I guess what really amazes me is that people pay money to watch this shit.  And by "pay money" I don't mean spending $6.95 for one month of streaming service (and then cancelling it) but paying $100 a month or more for full-boat cable service.   How odd - paying money to be advertised to.  Yet people do it, and it was the one thing that stuck in my craw about cable.  Why should I be paying to have my brain programmed by marketing people?  So instead, I watch "free" stuff on YouTube with... advertisements from the marketing people.  Funny thing, though, since YouTube started packing ads onto even short videos, I find myself watching less and less of it.   More and more videos are starting to be like the History Channel, where a "YouTuber" pads on the minutes by doing unnecessary lengthy introductions before getting to the point - so as to increase ad revenue.  They are network suits in miniature.

The only answer I have to any of this is to consume less media, which is really hard to do, when they have silent televisions (or blaring ones) in every home, office, place of business, restaurant, and even on gas pumps these days.