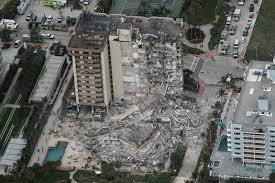 Could the collapse of the Surfside condos be the trigger for an overall market retraction?

Back in 2006 or so, we sold our condos in Florida and made a nice profit and moved to Georgia.  Things were going crazy back then - houses selling in a weekend, for over-asking, with multiple buyer's contracts each with escalation clauses.  People knocking on your door and asking if you wanted to sell (as happened to us, more than once).   Properties costing twice as much to own as to rent.   People paying top dollar for properties needed tens of thousands of dollars of work, just to move in.

In other words, it was just like today.  But then the bubble burst.  Why?

I recounted before why.  Builders went nuts putting up high-rise condos from Miami to Ft. Pierce and beyond.  They initially sold well, but toward the end, the buildings were going up with no takers, other than some "investors" who were hoping to "buy and flip" a condo unit.   All these high-rises "topped out" at the same time, and the market was flooded with thousands of condos, not only from the builders, but from the early buyers who were hoping to "flip" an empty condo (which was "designer ready" - with bare concrete walls and stubbed-in plumbing).

There were other factors as well.  People who bought a few years earlier saw their funny-money loans "reset" to a new rate and suddenly the payments were unpayable.   These "investors" had hoped to "flip" their properties before the loan rates went up (or the balloon payment was due) but like the lonely child in Kindergarten, was still standing up when the music stopped, during musical chairs.

There were also external factors.  You bought a house or condo in Broward County and the taxes seemed pretty reasonable.  But the next year, they re-assessed your property based on your purchase price, and suddenly your taxes are thousands of dollars higher.   Meanwhile, three hurricanes later, your homeowner's insurance has doubled, adding to the monthly carrying cost. Throw in some unexpected repairs and perhaps a special assessment on your condo, and suddenly, the "affordable" condo is draining your bank account dry.

So you go to sell it - it was a great investment, right?  Well, everyone else thinks the same thing - sell, sell, sell.  And the market collapsed, almost overnight.  Many condos nearing completion just stopped construction.  Others were "see-through" buildings with no interior walls.  Still others were darkened monuments to the hubris of mankind, with perhaps one lonely light on near the top floor - the man in the high tower.

Well, you know the rest - people freaked out.  Everyone wanted the government to bail them out.  Companies went bankrupt, people went bankrupt.  The economy and the stock market tanked, and it took eight long years of slow and steady growth under Obama for it all to come back.

The recent collapse of the condo towers in Surfside should be troubling for anyone thinking of buying a high-rise condo in South Florida.  I am sure that many a place "under contract" has fallen through, as nervous buyers - and bankers - start to re-examine these properties, paying more attention to the fundamentals or the "bones" of a place, which they should have been doing all along.

There will be more stories in the press, I can guarantee you, about condo boards who vacillate about major repairs, as well as more stories about palling concrete and rusting rebar.  People will start to take this seriously - deadly seriously.   And I expect that sales of condo buildings near the beach, built during the 1970's through the 1990's will be hit hard as buyers shy away from older construction - unless the maintenance of the building can be shown to be impeccable.  Buyers will start to do things like look through the parking garage and educate themselves about the wonderful world of Rebar.

Will sales (and prices) bounce back?  Of course they will.  But this latest event might hit the "pause" button on the current madness in real estate.   People are panic-buying properties right now, and oftentimes, for stupid reasons.  Half the houses on our little island are being bought by people who use them one weekend a month.   For the price they are paying, in terms of overhead and other costs, well, they could have a suite at the Club Hotel - all meals included - and not even have to make the bed.

Are we in the middle of a real estate bubble?  I think so, but not nearly as bad as 2008.   Prices, at least where I live, are edging up, but our house is worth little more than it was in 2008.  In fact prices have been flat here for a decade or so.   So some price growth was to be expected, particularly with interest rates so low.

And therein is another factor to consider - interest rates.  They have to go up eventually, and with inflation the way it is....  well, I guess we'll just have to wait and see.

UPDATE: Don't have to wait long, as it turns out.