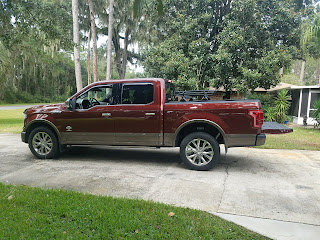 Something as simple as mounting a set of tires has become far more complex.

We finally arrived in Maine, and the tires I ordered for the truck were safely in my brother-in-law's barn.  We took them to a local tire warehouse and they mounted and balanced them for $30 each, including tax and tire disposal fee - as well as reprogramming the tire pressure sensors.

That is the first conundrum for modern car owners - the tire pressure sensors.  They have some sort of battery in them and wear out, apparently, over time, and need to be replaced.  If so, you have to dismount the wheel and at least break the bead on the tire (take it halfway off) to get at the sensor.  Then you remount the tire, put it back on the car and program the new sensor.

So the conundrum.  Do you replace the sensors when you replace the tires?  The tire warehouse place offered to do this, replacing the FoMoCo brand tire sensors with "generic" ones that needed to be programmed to the correct frequency for that make, model, and year truck.  Cost was $50 a wheel, or $200 overall.  Ouch.

If you don't replace the sensors and they go bad, you have to go back and pay more to have the wheels taken off and the sensors replaced, than you would have, just replacing the sensors when you change tires.

A friend of mine has a nice Mercedes and he was letting me drive it.  I noticed the tire sensor light was on, and he explained that he put new tires on it a few years ago, and didn't change the sensors out.  He went back to the dealer and they wanted $200 (or more) to un-mount the tires and install new sensors.  He took a pass.  For a car that is driven 5,000 miles a year or less, the sensors may wear out - the batteries go dead - and they will need to be replaced even though the tires are just fine.

So.... do I replace them or not?   The laws that mandated "TPMS" sensors required they last five years.  Many last about 7-10 years.  So we'll just have to wait and see, I guess.  I may regret not replacing the sensors when I did.  But on the other hand, the "generic" sensors they were offering were guaranteed only for four years.  I should have ordered OEM sensors when I bought the tires.

Why do we have these sensors?  They are mandated by law today, much as seatbelts were back in the mid-1960's and backup cameras for SUVs and trucks today.  The problem was - and is - that people have no idea how to check tire pressures on their car, which is essential.  As a result, tires with slow leaks lose air, and tire load capacity is non-linearly dependent on tire pressure.  Drop from 35 pounds to 25 pounds and you have less than half the load carrying capacity on that tire.  The sidewalls flex, heat up, and eventually the tire blows out.

Back in the day, every gas station had tire pumps, and the "full service" stations would check your tire pressure, oil level (because all cars burned oil back then, even when new) as well as radiator fluid and battery acid levels.   But car owners knew to check tire pressures regularly.  In the days of tube tires and later on, bias-ply tubeless, blowouts were common, so you kept an eye on things.

Radial tires and improved tire technology made tire leaks a thing of the past.  In the days of bias-ply tires (i.e., until the early 1970's) you might get 30,000 miles, tops, out of a set of quality tires - and one or more of them would be patched with a plug before they wore out - as nails and screws and such easily penetrated those tires.

Enter the radial era, and you can get 50,000 miles or more out of a set of quality tires, without ever having a nail or other problem.  Tires are just better made, so we become complacent.  People aren't educated about car care anymore - we abolished driver's ed, which usually taught these things.

I recall back in the 1990's being at the Mobil station on South Washington Street in Old Town (now gone) and a young woman was pulling away from the pump with a tire that clearly had no more than 10 psi in it.  I called to her and said "hey, you should put some air in that!" and she said, "mind your own business!" and pulled out onto the beltway doing over 50 mph on the on-ramp.  A blowout was a certainty.

About the same time was the "Firestone" tire scandal.  Ford Explorers of that era would tend to roll over if a tire blew out, particularly if the driver panicked and sawed at the wheel.  The tires would blow out because they ran low on air because the drivers never checked their tire pressure (and the recommended tire pressure of 26 psi didn't leave a lot of wiggle-room if you lost air, as all tires do, over time)  And as our car fleet nationwide skewed more and more toward tippy SUVS and pickup trucks, well, the problem got worse and worse.  A blowout in your low-slung Pontiac of 1962 wasn't a big deal, but on an SUV that rides a foot off the ground, it is a serious issue.

So, we have TPMS mandated because we make shitty choices in car purchases - buying jacked-up SUVs so we can "see out" and pretend we are serious off-roaders, when in fact, we are not.   Our driving skills get worse and worse, and because cars are better made, we don't take care of them as well as we used to.

Ahead of me in line at the tire place was a young couple with a cute dog, which I petted while I talked to them.  The car was a leased Hyundai, and we were talking about cars and he made some derogatory comment about KIAs - until I reminded him that it was the same company as Hyundai (which he apparently didn't know - a real car guy!).  Anyway, his lease was up in November and he was hoping to put off putting tires on the car until he turned the car in.  He bought "tire insurance" from the dealer which meant that if the tires were bald upon turn-in, he wouldn't be charged for it.  So he was driving on two front tires that were down to the wear bars, and one of them went flat.

I looked at the tires and was amazed - these were in fact Michelin's.  I asked him how many miles he had on the car, and he said he had only 30,000 miles (because, you know, lease).   I jokingly said, "you must do a lot of burnouts!" and his wife nodded and even the tire guys (who apparently knew him) all joked that he "left rubber" everywhere he went - in a Hyundai!   He already went through two tires and now he needed the other two replaced.  What a silly waste of money - showing off by beating on your own car.  Why not just set fire to $100 bills like the rap stars do?  Dumb.

But both of them had leased cars and we were talking about the "car shortage."  I believe that so many of these "shortages" are being engineered now, as people accept higher prices on the premise of "it's the pandemic and all" and thus give an opportunity for marketers to charge higher prices.  Well, that and inflation.  The problem with leasing cars today (in addition to all the underlying problems) is that when you turn your car in, the dealer might not have much in stock for you to choose from.  So you are stuck leasing a brown car with a green interior, whether you like it or not, at a price over sticker.

Sure, you can choose not to re-lease a car, but then the dealer socks you with "back-end" charges for "wear and tear" and over-mileage and whatnot (which are forgiven only if you lease or buy another car from them).  And even if you go to another dealer, the situation is the same - selection sucks and prices are through the roof.  Used car?  Same deal.  You are now forced to buy a car at a time and place not of your choosing and as a result, are not in a position to bargain.

Those of us who bought our cars, well, we can decide to wait for this panic to end and the fake "shortages" to go away, which they will, over time.  Unless you wreck your car, you have the option of keeping what is already in your garage, and as I have noted before, often the best used-car value is already parked in your driveway.

I felt sorry for these kids. Kids - they were in their late 20's!   But they were going from lease to lease, and like junkies, they couldn't stop.  They were convinced that buying a used car was out of the question ("too unreliable!") and given the way they treated their own cars, well, I could see why they thought this way.   After all, it is a given that people just beat the crap out of their cars, right?

Well, not exactly.  In the Northeast, I see a lot of horrible driving habits.  Flooring it all the way to a stop sign and then slamming on the brakes once you are in the crosswalk (flinging your passengers into their seatbelt shoulder harnesses) seems to be the norm, as is running said stop sign without fully stopping or even looking both ways.  Tailgating (which scours the paint off the front of your car) seems to be the norm.

I was driving to the kayak launch area - a 0.3 mile ride from our campground, on a narrow road with pedestrians and cyclists on it.  Speed limit was 25 mph.  Some guy from Massachusetts was in a real hurry to cover those three-tenths of a mile and tailgated me the whole way - he was doing at least 45 before he pulled up on us.  What was the point?  The road ends in ocean in a minute or so.  The ocean will still be there, too.  There are a lot of angry drivers up here, it seems.

Which brings us back to our topic.  TPMS sensors, backup cameras, self-parking, lane control, and so on and so forth - they are all signs of technological prowess, but also signs that as a nation, we have forgotten how to drive. Eventually, robotic cars will be a thing, not because we want them, but because by then, no one will know how to drive.  Quite frankly, it frightens me to ride with some friends - their lane control (and speed control) is atrocious and they speed and run stop signs and cross the center line.  They suck and yet they are in such a hurry all the time, with no particular place to go or any reason to get there ten seconds earlier.

Some readers claim that this "AI" thing will take over the world and control our lives. I sincerely doubt that - what we call "AI" is hardly intelligent, but merely keyword searching, without context.  Maybe the folks at Planetir can collect all sorts of data about you, they still really can't get into your head or even predict what you are going to do next.  So far, it seems the only can tell what you did.  Yes, we are getting lots of ads for tires these days, a month after I bought them.  AI - the future?  More like the past!

But if the robots take over, it won't be because they have to hunt us down like in The Terminator, but because we willingly hand over our lives to them.   And in fact, this process already has begun - and began....

...when we stopped checking our tire pressure.