What is your NET WORTH? 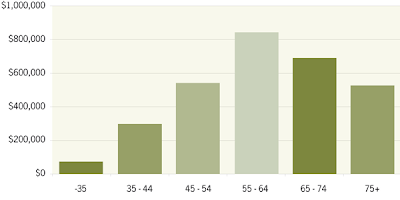 What is your NET WORTH?


"Trusts and Estates" is one of the courses that I took in law school that really opened my eyes about finances (tax law being the other).  While reviewing the various cases, and hypotheticals, the professor would always start by saying "The deceased left an estate of $500,000" or some other amount.

This got me thinking about my own "Estate."  At the time, I was a law student living in a rented apartment.   I had a used car barely worth the balance left on the loan, a few household effects (mostly hand-me-down furniture) the clothes on my back, and the very beginnings of a retirement program at the USPTO.   Factoring in Student Loans and Credit Card debt, the net value of my estate was zero - or pehaps even negative.

I have never thought to calculate my "Net Worth" as most people in my age group at the time (20-30) rarely thought of such things.  We were still living in that giddy post-adolescent phase of our lives, excited to be living as "adults" for the first time, with an apartment of our own, a car, and money in our pockets.   But like most young Adults, I was squandering faster than I was making.   Not only did I have a zero "Net Worth" - it was going negative in a hurry.

This is a typical trap many young people fall into - lured by the sirens of commerce.   Going out to clubs, buying trendy (but poorly made) clothes, eating meals in restaurants, buying brand new cars (and paying more in insurance payments than car payments) and living in high-rent "luxury" apartments.   The monthly income can pay for all of these things, and even more can be borrowed at high interest rates on a credit card.  But while such a "lifestyle" provides the appearance of wealth, the actual increase in wealth is zero, if not negative.

One day, after class, I sat down and calculated my Net Worth.  It is not hard to do.  You can use a fancy spreadsheet program, or just a word processing program, or even a pencil and legal pad.

In one column, add up all of your assets.   Start with Real Estate (make an honest appraisal, you are fooling no one but yourself using inflated estimates) and then add in your investments in your 401(k) and retirement plans, as well as after-tax investments.   Then add in the value of any tangible assets (cars, boats, etc.).

I usually add in a flat value for personal property and furniture.  My banker says this is sort of bogus, but after selling a lot of things on eBay and Craigslist, I can say that there is a certain liquidation value to all that junk you've bought over the years, if you market it properly.

Once you have totaled all of this up, you have the total value of all your assets.   Now, in a second column, total up all your debts.  Start with Mortgage debt, add in Student Loans, Credit Cards, and any other loans or debts.  Total this up, and hopefully it is less than your asset total.  Subtract this from your asset total and you have your net worth.

Often this exercise can produce surprising results.  When I was young, I was chagrined to see that the Net Worth amount was slightly negative.  I had little in the way of assets and much in the way of debt. To some extent, this is hard to avoid in your youth (unless you come from a wealthy family) as you will likely have to incur student loan debt early in life to get an education.  When I first calculated my net worth, Student Loan debt was the big negative.

The exercise energized me, however. I started out on a plan to build up my "estate" at that point.  We bought our first home, building equity instead of paying rent.   We also maxed out our contributions to our 401(k) plans and started setting money aside into stocks, bonds, and savings accounts to build up "liquidity".

I started keeping a chart of our investments and debts, and every few months (when quarterly statements came out) I would run the numbers and see how things were working out.  As my income increased, it was easy to put the additional money into investments, as opposed to increasing our lifestyle spending (as most do).   By keeping older cars and driving them longer, we were able to put money aside.

Looking back at these early handwritten data sheets after 20 years, it is sort of amusing and interesting to see the numbers grow over time. From that initial negative number, the balance quickly started an upward trend, passing $20,000 then $50,000 and on one glorious day, $100,000.  Over the years, I have kept up on these calculations, usually on an annual basis after New Year's.  It didn't take as long as you'd think, but after many years of investing in stocks and bonds, and after making some very good Real Estate investments, the total one day had two commas in the number.  On paper, at least, I was (and still am) a millionaire.

(Note that some financial analysts would still not consider me a "millionaire" as they would only count investment dollars, not things like residences, vehicles, or personal property.  In terms of money to invest, I am not a millionaire - just yet.  However, if I were to die tomorrow and my estate were liquidated, the amount left behind would be quite sizable).

The key word here, of course, is "on paper."  What does this mean?  Well, if you take the value of my Real Estate (which is not liquid) and the values of my retirement plans and investments (which cannot be cashed in without penalty and thus are not liquid) minus mortgage debt and credit card debt, you get a pretty sizable number.  But most of that number is tied up in things that cannot be readily liquidated and spent.  If you were to break into my home looking for "loot" you'd be disappointed to find only $20 in my wallet and not even a big-screen TV to steal.  I may be "wealthy" but I am not "liquid".

Incidentally, this underscores a big misconception that the poor have about the wealthy.  Many poor folks think wealthy people have lots of cash lying around - stacks of dollar bills or gold bars tucked away in wall-mounted safes. The home invasion robbery documented in Truman Capote's In Cold Blood, was based on this misconception.   The Clutter family, the victim of the attack, were fairly prosperous farmers.  But there was no "safe" in the house filled with cash.   Like most people, all their transactions were by check.  And although a farmer may have a lot of money pass through his hands, he gets to keep only a small percentage of it.

And this also underscores how the perception of wealth and real wealth are two different things. Two people living side by side in identical houses with identical cars and similar lifestyles can be radically different in terms of level of real wealth.  Household A might be spending every penny they make on keeping up appearances, buying brand new cars, spending every dime on clothing and eating out, and putting nothing into savings.  Household B, on the other hand, may be putting real money in the bank and paying down debt, while making small but cumulative economies that result in building a real Net Worth. Two families, two houses, both appearing to be the same, but one poor and one rich - and that is what this blog is all about, by the way, figuring out ways to live well - or live better - on the same income.

In the United States, there are over three million millionaires, or about 1% of the population (depending on whose statistics you cite, some say 3% or more).  Having a net worth over a million bucks is no big deal anymore, because frankly, a million bucks isn't a lot of money anymore.  And as we all lurch forward into retirement, a million dollars doesn't look like such a nest egg, when you consider rates of return on income.

For example, assume you want to retire and want to have a comfortable income.   For a "safe" portfolio of investments, you'd be lucky to get a 5% rate of return these days.  Assuming you had a million dollars in invested retirement assets (this does not count your personal residence or effects), at that rate of return, it would provide you with a retirement income of about $50,000 per year.

While this may sound like a lot of money to some folks, bear in mind that in 10, 20, or 30 years, $50,000 could be the equivalent of living below the poverty line, particularly if inflationary pressures occur.  If one or more of your investments goes South, you could be in serious trouble.   Relying on Social Security at this point seems dubious at best, given the stresses on the system (my generation has all but been promised that it will not be available as in the past).

The old saying goes that you can't be too rich or too thin.  Anorexics have proven the latter wrong.   But the former is largely true for most Americans (although these mega-lottery winners prove there can be such thing as too much wealth).

When I run my Net Worth calculation today, it is somewhat more comforting to see a fairly large number compared to the paltry sums from my past.  But as I look forward to retirement and an uncertain future, the numbers seem paltry and tiny.   At any age, figuring out your Net Worth is an exercise that will motivate and energize you.
Newer Post Older Post Home