Cars as Presents? Are you INSANE? 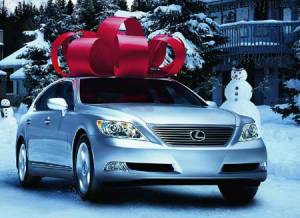 Buying a car without telling your wife is a stupid idea.  And the giant bow?  Designed to impress the neighbors no doubt!


A friend of mine sent me this viral video recently, which is a take-off on the classic "Honey, I bought you a Cadillac for Christmas" advertisement. It is pretty funny.

The idea of giving a car as a gift for Christmas has been promoted by the media over the years. Dad can come off as a hero if only he surprises the wifey with an expensive SUV or Caddy, replete with a giant BOW on the hood or roof.

Saturday Night Live did a spoof on this concept with a fake commercial for "Flederson's Giant Car Bows."  Husband surprises the wife with a new SUV, only to find out she is disappointed when it doesn't come with a giant bow attached. (If you have a link to this skit, please let me know. Here it is).

UPDATE:  Apparently there is a Flederson's, but it has a different name - "Bow Kingdom".  They make huge bows for cars and whatnot.

Yes, you could buy a giant bow for your car.  What do you do with it after that?

Ironically, when searching for this SNL skit on the Internet, I did find links to companies that actually make Giant Car Bows. So the spoof on SNL was a little too close to reality. People apparently do this - act out the advertisement on TeeVee and buy their spouse a new car for Christmas, replete with Giant Car Bow. I wonder if the reality is anything like the commercials. I doubt it.

An early sighting of this idea in popular culture that I am aware of was in Kurt Vonnegaut's Slaughterhouse Five, where the hero (anti-hero?) Billy surprises his wife with a new Cadillac on her birthday. Ironically, she later ends up dying in the car due to carbon monoxide poisoning.

In the HBO Soap Opera The Sopranos, Tony surprises Carmella with a new Porsche Cayenne, to salve his guilt over having mistresses and also provide a neat product placement for a sponsor (Whoops! That's right. HBO is commercial-free. Riiiiiiight!).

As I have noted again and again in this blog, the media, specifically advertisers, like to promote as "normal", many personal economic ideas that are fraught with peril. Car makers would love it if you believed that buying your wife a car as a gift was a good idea and that she would love you forever for it.

The reality is, for most middle-class, upper middle-class and even wealthy Americans, the idea of buying something as personal as a car as a gift is a really, really bad idea. Taking aside the issue of whether she'll like the make, model, and color (would you want someone else to select your car for you?) buying a car as a gift is a fundamentally unsound financial proposition.

And if you think about it, if you take the joint marital assets and buy your wife a car as a gift, is that really a "gift" at all? After all, half that money (in most States) is hers. So far from buying a thoughtful gift, you are merely spending her money for her. How nice - and misogynist, too.

A husband and wife should work together on family finances and make major purchase decisions jointly. A husband who goes out and makes a major purchase such as an automobile, without consulting his spouse, is being irresponsible with their finances. A new car is a multi-year financial commitment in terms of payment, depreciation, and insurance. To buy one on a whim as a gift, well, most spouses I know would not be jumping for joy.

And for a spouse to be so unaware of the family finances that the husband can go out and purchase a car is also a scary scenario. Unfortunately, in many families, such is the case. In the old days - 50 years ago - it was not uncommon for a man to be the sole breadwinner and to "handle all the money" - giving the wife a weekly or monthly allowance to maintain the home.

However, in today's world, it is more common for both husband and wife to work or have careers, even at least part-time work. And regardless of whether both husband and wife work, managing money should be a joint effort and something done with mutual consultation. Managing money in such a scenario should be a joint effort, not a solo practice. And why not? Managing money is a difficult task. Two heads are better than one. So it pays to have someone to bounce ideas off of and to get feedback on financial management.

This is not to say that one person shouldn't balance the checkbook and keep records of purchases. In any relationship, one person will end up more inclined to do such things - it is an onerous chore. And trying to have two people balance the same checkbook is often difficult at best.

But the allocation of resources in a relationship should be a joint undertaking and something jointly discussed. Otherwise, a relationship quickly becomes a "race to the bottom" as each spouse tries to out-spend the other, sometimes in retaliatory acts of revenge. "He bought a new power tool! I'll show him! I'm buying a new pair of shoes!"

Such relationships do not last long, as each spouse looks at relationship in terms of "what am I getting out of this?" Financial difficulties inevitably follow and the recriminations start and pretty soon even more money is squandered in a divorce.

Think I am being dramatic? It actually happens. As I noted before, I once sold my motorcycle to a fellow who had just been divorced. He paid me full asking price, which sort of surprised me. When I asked him more about why he was buying it, he said, "I just got divorced and had to sell my Harley and my Corvette. So I'm buying another motorcycle and a Camaro. I'll show that bitch!"

He was desperate to show his ex-wife that he was not going to be cowed. He would still have a bike and a sports car, albeit not a Harley and a Corvette. I kind of felt sad for the guy, but was happy to take his money. I hope he realized there is more to life than buying things in an act of revenge.

Making a major financial decision such as buying a car should be something that is carefully discussed and debated between you and your spouse. You should research it carefully and make a wise investment decision. Impulse purchasing a major appliance like this is never a good idea. While it may be thrilling to buy a new car, it is a much smarter deal to buy a 2-3 year old used car. Working together toward a common financial goal and financial future is far more rewarding than impulse-spending to try to win approval.

And please, don't tell me "you can afford it". Unless you are mega-wealthy, you can't. The average suburban Joe, even if he is making $100,000 a year or more, can't afford to be that lax with money.

The idea of a new car as a gift has a corollary in the concept of the new car as memorial. Increasingly, we are seeing cars, trucks, and SUV's with carefully crafted stickers on the back proclaiming that the vehicle in question is "In Memory Of" a deceased loved one. I am not sure how this concept came about (perhaps the car was purchased with the life insurance money or accident settlement?) but it is pretty tacky.

To begin with, a car is a transitory thing. As a long-term form of remembrance, using a car as tombstone seems somewhat odd. I saw one such vehicle the other day, with "In Memory of Joe Blatz, Loving Brother" neatly decal-ed on the rear window. Next to that was a sign saying "FOR SALE".

This begs the question (or questions) as to whether the new owner is to maintain the truck as a permanent memorial to old Joe, or whether Joe's brother will summarily scrape off his memorial when selling the truck. Will the next truck have a similar memorial? What is the protocol on this? Does one have to perpetually have memorial stickers for family members on all cars, or only until you sell or trade-in the vehicle? I don't fully understand these newfangled traditions.

Here's the deal. Cars are just things. Expensive things. And they can cost 2-3 times more than they should if you are buying them brand new and then trading them every 2-3 years. Buying your wife a car as a gift is not going to make you the hero of the family, particularly when the car payments mean that some other expense (such as funding your retirement) goes unpaid.

And please, please, do not memorialize me on the back of some pickup truck or SUV. I don't even want a headstone, much less something as tacky as that.
Newer Post Older Post Home