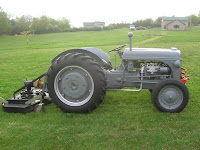 Mowing five acres of lawn sounds like fun.
But it really is just an exercise in futility.


Americans love their lawns. Billions are spent annually on lawn mowing machines, fertilizers, irrigation systems, pesticides, turf, grass seed, and the like. Millions of man-hours are wasted every year on lawn mowing. For many Americans, particularly men, and particularly older men, and particularly retirees, the obsession with the "perfect lawn" can quickly become a nightmare. And in recent years, lawns have become larger and larger as houses have become bigger and ill-advised density rules have made lot sizes larger.

The revelation for me regarding the lawn came about when I was visiting a tractor dealer and was trying to rationalize to myself that spending $15,000 on a lawn mower was a sound financial proposition. I suddenly 'woke up' in the middle of the transaction and realized that I was about to piss away a substantial amount of money on a machine to maintain a huge swath of lawn (nearly five acres) that I didn't really need - or want.

And yet, for many Americans, maintaining the perfect lawn - and a large lawn, is considered the ultimate status symbol and something that is both desirable and beautiful. Economically and ecologically, however, the perfect lawn can be a nightmare to both your pocketbook and the environment. By creating an artificial environment, sustained by non-native species of grass, fed with chemical fertilizers (derived from crude oil) and poisoned by toxic chemicals (to kill bugs) we displace a quantity of natural habitat, for little purpose other than aesthetics.

And it is an interesting aesthetic. To some extent, the vast greed sward is attractive, if part of an English Country Manor Estate. But surrounding a manufactured home, well, it just looks kind of cheap and middle-class. And the American middle-class loves to mow lawns.

In creating the "perfect lawn" nearly every aspect of nature is against you. In addition to bugs, lack of rain, drainage, and poor soil, you will be fighting gophers, moles, skunks (who like to dig) deer (who eat and defecate) as well as a host of other animals. The large sward of grass is nothing more than a declaration of war on nature. And it is a battle that you will lose, the moment you drop your vigilance. Why bother fighting in the first place?

Historically, the lawn originated with the raising of sheep and other grazing animals. Grazing animals keep grasses at a trim level, and they naturally fertilize a lawn with their droppings. It is perhaps some evolutionary trait of ours to prefer the view of a neatly trimmed verdant lawn, as it reflects on the prosperity and contentment of the successful shepherd or farm owner.

The blame for the modern lawn, however, I believe rests with the English and their country homes. While they may have had acres of grazing pastures surrounding their estates, the acres close in were maintained by armies of servants and cutting machines, providing the manicured look of the English garden.

The problem is, middle class Americans have tried to mimic that look over the years. In the early part of the last century, most Americans had fairly modest homes on small lots. It was not a huge effort to maintain a small and orderly lawn with a hand-powered reel mower. Only the rich had large lawns surrounding their mansions. And the large lawn was one sign of wealth.

In the post-war housing boom, houses sprang up in suburbia, often with quarter acre to half-acre lots. People wanted space, and these relatively large lawns provided the appearance of wealth. The gasoline powered rotary lawn mower, a relatively new invention, made it possible for the average Dad to mow these larger yards. Companies like Briggs and Stratton and Techumsah prospered with brisk sales of their small lawn mowing engines.

But of course, there was more to lawn care than merely mowing the grass, and in short time, whole industries sprung up to solve lawn problems and provide the more verdant and lush lawn that would be 'the envy of the neighborhood'. Like the big car or the new television, the lush lawn became a status symbol, and many, if not most folks got caught up in the spending spree toward the perfect lawn. And those without the perfect lawn got caught up in the lawn anxiety prevalent at the time and hyped on television. Crab grass was touted as some sort of personal failure, like "telltale dandruff". And Madison Avenue had products to sell you that would solve both problems.

As lawns got larger in the 1950's and 1960's, riding mowers and small "garden tractors" became more popular. Today, most suburbanites have such riding machines, and many Dads secretly enjoy their weekend jaunts on these machines, a chance to play farmer in miniature scale. Many view mowing time as a time to themselves.

In the 1990's many developments started placing homes on huge lots. In some instances, ill-conceived zoning density requirements mandated no more than one home per five acres. Builders responded by making building lots larger and larger - plopping mini-mansion houses in the center of five-acre tracts which were formerly farm fields. The former farm land was replanted in grass.

Many homeowners suddenly found themselves responsible for large acreages of lawn which they had little or no interest in. And yet homeowner's association rules mandated that it all be mowed down. Small armies of immigrants sprang up to mow down the lawns of these developments.

We decided to get off the "big lawn" bandwagon this year. The previous owner of our home had spent considerable time and effort to make the huge lawn nice. But mowing many acres of lawn is time consuming and expensive. With a small agricultural tractor and zero radius mower (combined value, nearly $8000), it still takes 2-3 hours for two people to mow all that lawn. And while it does have some aesthetic appeal, it is a very costly and time-consuming item to own.

Moreover, trying to keep such a lawn verdant is difficult. The cost of properly fertilizing and spraying insecticide on such a lawn is prohibitive. Thus, if you want to "do it right" you'd have to invest tens of thousands of dollars in mowing machines and chemicals, over time, to truly make it into a showplace lawn.

We decided instead to let more than half of it revert to meadow. Letting the grass (and wildflowers) grow will provide better habitat for local animals. And the cost of mowing such a field (done maybe once every two years) is far less than the weekly cutting required. Wear and tear on mowing equipment is dropped. We probably will be able to sell the tractor entirely, or use it only for the occasional bush-hogging. But frankly, it may be cheaper to just hire someone to do that every two years.

By letting that part of the lawn "go", we can concentrate more on the lawn surrounding the house, which can be more carefully maintained and look nicer. It is far easier to mow such a smaller section and also trim, fertilize, and spray for insects.

For our Georgia home, we are planting fan palms (or letting this native species grow up, instead of mowing it down) which create a restful appearance of a primeval jungle. By taking up more and more of the yard, these palms, which grow like shrubs, reduce the amount of mowing needed.

Other types of ground cover, Myrtle and the like, also can reduce or eliminate the need for lawn, and be largely maintenance free and attractive.

Many Americans are discovering the joys of the home vegetable garden - and pulling up useless lawns to plant vegetables. Unfortunately, they are running smack-on into American's love of lawns, as local regulations and homeowner's association rules often forbid such plantings, at least within a certain distance of the road.

Many more Americans are discovering the joys of smaller lawns. Houses need not be spaced acres apart, and the ill-conceived notion of housing density per acre has resulted in the destruction of more and more farmland. It is better to place houses in small "villages" as our ancestors did, and allow surrounding lands to be farmed, than to place houses in a spaced apart pattern across the landscape.

In many drier areas, many are abandoning the lawn altogether in favor of dryscaping using native rocks and plants. Trying to create a verdant lawn in a desert is proving to be a folly.

For many folks, however, the option of going lawn-free is difficult, if not impossible. If you own a home on a 1/3 acre lot in a humid climate, it is impossible for lawn NOT to grow. Dryscaping is not an option, just a weeding nightmare. And it is hard not to get caught up in the race to have the greenest lawn in the neighborhood.

There are some things you can do, however. First, stop obsessing about having the perfect lawn. If your self-esteem is tied up in how your lawn looks compared to the neighbors, then maybe it is time to re-evaluate your priorities. Granted, a good looking lawn will increase your resale value when it is time to sell you home. If you plan on selling your home, spend some money fertilizing and weeding in the year or two before you sell, to make the house look better. But until then, just cut it.

Another option is to set your mower higher. Many older men like to set their mowers on "Scalp" which keeps the lawn nearly like a putting green. It also makes the lawn look like it needs mowing more often, which means that you have to mow it more to keep it looking nice. Set your mower at the highest setting possible. Not only does this mean less mowing, but it also means the grass will be healthier. If you don't believe me, ask the local landscaper - or better yet, take a close look at how high his mower is set.

A new innovation that may make the lawn easier to deal with is the robotic lawn mower - the answer to the prayers of lazy men (and women) everywhere. Powered by a rechargeable battery (which may be recharged from solar panels), these small robots randomly traverse your lawn like the "roomba" vacuum cleaner and continuously mow the yard using small blades attached to DC motors. The only problem with these "lawn bots" is that they are relatively expensive at the present time, and thus don't reflect an answer to the lawn problem, but just another expensive symptom of it.

The obsession over the Lawn has become so ingrained in American life that many can't even conceive of life without it. Many older men, upon retirement, have little or nothing else to do other than to obsess about their lawns ("Maybe now I'll have time to get the lawn in shape!" they say). But spending your "golden years" trying to make a swath of grass look "perfect" to impress others (how much time do owners spend "enjoying" their own lawns?) seems like a waste of time and money to me. But once on the lawn bandwagon, it is hard to get off. The industry is more than happy to reinforce this lifestyle choice.

The irony is, of course, that while a nice lawn is nice, it adds little to the resale value of a home. And eventually, the retired man will end up in a retirement home (after having a stroke while mowing his lawn) and have no lawn to care for. And certainly, his epitaph will not read, "He had a really nice lawn".

"The grass is always greener on the other side of the fence," they say. That's the way it should be!
Newer Post Older Post Home