Threshold of PAIN Theory and Practice 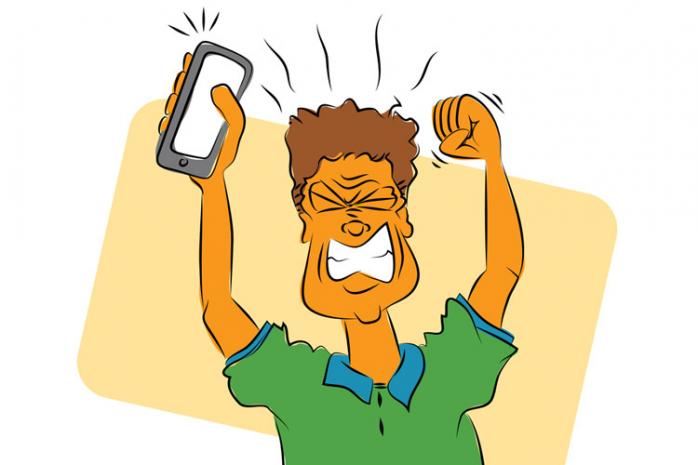 There is a reason why cell service was so shitty, particularly in the early days of analog flip-phones.  Turns out, making service unreliable and spotty was part of the business plan!

Over the years, I have represented some real interesting folks. The telephone and cell phone companies. The Cable TV industry. Nice folks. Well, not really. Let me explain.

I was in a conference room with a fellow from a major telcom, waiting for a meeting to begin. We were discussing how bad cell service was. I opined (naively) that perhaps in a few years, with more cell towers constructed and new technology, that dropped calls and bad signals would be a thing of the past.

"Don't bet on it" our client said. And he was right.

It turns out the cell companies had studied the issue extensively. Cell phone users expect that cell service will not be as reliable and have the clear signal that land lines have. Land lines have to meet certain standards in this regard, while cell service does not. Putting in additional cell towers and upgrading technology to improve service is not cost-effective when people are willing to accept a certain level of bad service and dropped calls.

"It is what we call the Threshold of Pain" he said, "People will accept poor service up to a point, at which point they drop the service entirely or get irate. And it turns out that for cell service, this threshold is pretty high".

So the telcoms don't install additional towers unless service gets really bad. And they don't bother installing towers where there are not enough users to justify demand. So where you need cell service the most (the boondocks) you are likely to have it the least. And we all accept it as part and parcel of the cell phone technology, when in fact it is more related to economics.

Another fellow from the landline end of the company chimed in with a similar report. "We found that we can create problems for consumers, and then sell the solutions!" It is a Machiavellian system, to be sure.

"For example, people are annoyed by telemarketers, so we sell them caller ID so they can see who is calling. We make money. But some folks don't like having their phone number displayed, so we sell another service called Caller ID Block. Eventually, we will sell a Caller ID Block Unblock - you get the idea! Annoy the client and then sell them a salve to ease their pain. So long as we do not exceed that magic 'threshold of pain' they won't complain."

This same effect can be seen in other industries as well. We have outages or slowdowns in our Internet service. We complain, but we also accept a certain level of poor service. Poorly written software is prone to worms and viruses - so the same companies selling the software sell us the "virus protection" to fix it. It is a neat trick.

In essence, the "Threshold of Pain" theory is a form of baiting (see my article "They're BAITING You!") and often the goal is to separate you from your money. Companies know they can do annoying little things and a lot of people won't notice or won't complain - too much. If they can tack on a $5 service charge to every bill and no one complains, they make a lot of money. And to the few folks who complain, the agree to waive the fee, or claim it was a "computer error" and wipe the slate clean. So sorry, our mistake. My bad. We'll fix that right up for you sir!

For example, I recently changed my cell plan, as I had a staggering 2700 rollover minutes on my account. Clearly I was paying for more cell time than I needed. The sales person said that not only would I keep my rollover minutes when changing to a lesser plan, but that they would throw in 2000 "bonus" rollover minutes as a loyalty reward.

Well, you can guess what happened. Not only did I not receive the 2000 bonus minutes, they up and cancelled my balance of 2700 minutes, leaving me with only 50 rollover minutes. Good plan for them, as if I go over my new plan minutes (more likely) they can zing me with excess minute charges at exorbitant rates.

So I call the company and after 15 minutes on the phone, they agree to call back. They call back and "So Sorry, Our Bad" a "computer error" deleted my rollover minutes. They said they would fix it. Do you think they will (stay tuned)? The deal is, such "computer errors" might go unnoticed by most folks, and the company collects if the customer doesn't raise a fuss. For the few that do complain, the company can claim it was a computer error, not a systematic scheme to defraud their customers.

This is why it pays to review your bills and statements closely every month or even go online more often than that and check all these things. It also illustrates why you should keep the number of subscription services, credit cards, and other accounts to a minimum. If you have many subscription services (phone, cable, internet, cell, texting, satellite radio, onstar, etc.) then it becomes a major overhead chore to properly monitor them all. Pick the few services you really think you need and then drop the rest. You'll save money, too. It is surprising, but you really don't need a lot of electronic services in your life. Really.

A similar thing happened to me a month ago with my Merchant Account. A Merchant Account is something you need if you want to accept credit cards as payment from your customers. Back in March, they put a notice, in small print on page 2 of the Statement, that unless I opted out, they would add a $8.95 charge all future bills for "data breach insurance". This sort of "negative option" type enrollment should be illegal, frankly, and may be in some instances (it is an adhesion contract). But the Merchant Account people would argue that since it is a commercial transaction, such protections don't apply.

Regardless, it worked out to the same deal. I call on the phone, have to make a stink, and they agree to reverse the charges and drop this bogus "plan" - from my account. For others who did not complain and did not notice the increase in their monthly bill (or attributed it to other things), the plan was still in effect. Again, this is brilliant, in a very evil sort of way. You can nick the customers who afford it most and just annoy the customers who can afford it least. Of course, one wonders, with all the time the angry customers spend calling the 1-800 support line, whether it is worth it. I suspect that this cost was factored in beforehand, and in some conference room, months ago, the entire scenario was played out in a series of powerpoint slides for management.

The only problem with this "Threshold of Pain" theory of commerce is that eventually, even though the level of pain may be below the consumer's immediate threshold, the consumer will succumb to fatigue. Simply stated, the consumer gets tired of all these pins and needles and a death by 1,000 cuts. The consumer starts to become jaded and view every economic transaction as some sort of con-job. And the consumer stops spending.

And by fatigue, I mean it both in the physical sense and metallurgy sense as well. Just as you ca be worn down by such minor issues (having a cumulative effect) fatigue can wear down metals through repeated stresses, even though those individual stresses are not enough to fracture the metal. You bend, and press, and stress, and strain, and BAM, one day the metal snaps. And people do "snap" this way, too, often going off on a rampage. People will shake their heads and say "I wonder what set him off?" when in fact it was a accumulation of hundreds if not thousands of individual pressures acting over time.

Perhaps this is why advertisers love the 18-25 white male demographic - they have a high threshold of pain and have yet to succumb to fatigue. You can sell these folks anything at any price. But older consumers become weary of these "deals" and "plans" and "rebates" and other cons designed to slightly deceive you. As one gets older, one tires of this to the point where consumption drops. Why bother buying something when it becomes such a hassle just to avoid getting ripped off?

You go to buy a radio, and you have to dick around with the price, rebates, coupons, discounts, sales, and the like. You finally figure out a bottom line price, and the salesman starts selling 90-day no interest financing and an extended warranty. At some point you say "enough already, I don't need this stinking radio that badly" and you walk away. Merchants, over the years, have made the buying process so toxic that consumers dread consuming.

And nowhere is this more prevalent that at the car dealer. The actual price of a new car is apparently an irrational number that cannot be written down, typed, or displayed with any accuracy. Even if you can nail that down, through a buying club or an online pricing site, they still will try to wear you down with financing offers, undercoating, extended warranties, and the like. For most folks it is an exhausting and unpleasant experience. And yet, if you go to the dealer with a handful of cash, and say "I'll pay you a fair market price for this vehicle", chances are the salesmen won't even return your calls.

As our country ages, more and more people will fall into this fatigued demographic. And merchants will find it harder and harder to pull off these con-jobs. In order to sell to this demographic, you have to simplify things. To some extent, some merchants are realizing this and offering simplified plans - and making money at it. Consumers want to do business with someone who at least appears to be on their side and looks out for their interests. The adversarial model between merchant and consumer is not pleasant, and I do not think sustainable in the long term.
In the meantime, we as consumers have only two choices - to be eternally vigilant (which is fatiguing) or to simply opt out of consumption. For more and more people, opting out is becoming a viable alternative.
Newer Post Older Post Home