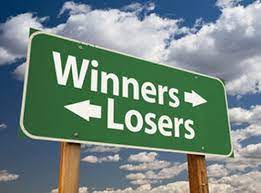 Should we laud winners and castigate losers?  How about neither?

The great thing about America and most Western Democracies is that you do have some choice, to some extent, as to how much of a winner, and in particular, how much of a loser, you want to be.

I used to have more sympathy for people who fell for poverty scams, such as title pawn loans, payday loans, rent-to-own furniture, and crooked used-car dealers.

But lately, my sympathy has dropped off a bit. These sort of folks are often willingly selling themselves into economic slavery so that they can literally have shiny trinkets, such as a used car, a wall-screen TV, or bling-rims.

The people who run the sort of businesses that exploit the poor and human weaknesses will argue that they are winners, and they are entitled to profit off the misery of the poor. I strongly disagree with this proposition, of course.

While it may be technically legal (in some jurisdictions) to loan money at 300% interest (as payday loan places do), it certainly is not ethical or Christian. And while some may decry the rapid increase in the number of businesses that exploit the poor as an example of declining social values, if you read your history, you will note that such tactics and businesses have always existed (See, e.g., Look Homeward Angel, by Thomas Wolfe).

Our new administration is pushing through a Consumer Credit Protection agency and it seems like a good idea. Various scams and cons aimed at the poor now have to more clearly disclose what utter rip-offs they are. The "free credit report" places that advertise heavily have to disclose that in fact, they are not free, and are utterly a rip-off.

Will this help? Maybe a little bit. History shows, however, that such regulations can be readily skirted. The invention brokers were required to list their "success rate" online. The idea was, once someone saw that their success rate was 0.00001% over the decades, no one would send them money any more.

While this information may have deterred a few people from squandering their cash, my experience with "true believers" is that they are ripe for the plucking, and the invention broker with the boiler-room phone bank and persuasive telemarketer will win out in most cases. Over a decade after these new regulations have been enacted, the Invention Brokers are still in business.

So what can the average person do? Be vigilant. Be smart. Be proactive.

Here are some tips:

1. Never, ever go into debt for status things: Whether it is a car, a boat, a stereo, shiny bling rims, or other junk, don't borrow money to do it. You want that crap? Save up for it. By the time you put all the money together for the 50,000 watt boom-boom stereo of your dreams, chances are, you'll decide that there are better things to do with it. That is exactly why Credit Cards are so dangerous - you can have now and pay later. By the time you pay off the credit card, the consumer item is broken, destroyed, or sold, and you have paid 2-3 times for it - and realized you didn't need it. Save debt for important things like education or a home.

2. Stop being a "Believer": Con artists use belief to get you to hand over their money. They get you to believe that gold is a good investment, or that your invention will make you a millionaire, or that you can day-trade stocks, or that you don't have to pay income taxes, or whatever. All of these scams and cons are based on selling a set of beliefs, not on logical analysis. If they can get you to check your critical thinking at the door, they have you. And by the way, this also means at the door of the church. Churches are often victims of con artists (or are con artists themselves), as they can fleece a flock and get away with it for years, because the parishioners are true believers. Even in religion, perhaps especially in religion, it pays to be skeptical.

3. Stop believing what you want to hear: The payday loan places say you can have money NOW and be happy. Sounds good, right? But of course, it only means you will be unhappy later on. They tell you what you want to hear - that you can get something for nothing, or buy now, pay later. It is all so enticing, but a little voice in the back of your head is no doubt saying "Life just isn't that easy!" Con artists use this trick all the time - getting people to think that wealth can be created from nothing, with no work on anyone's part. If it sounds too good to be true, it probably is.

4. Stop reacting to FEAR: The free credit report people are fear mongers. Unless you pay them $30 a month to "monitor your credit score" an "identity thief" will steal your identity and force you into bankruptcy. Of course, this is not true. The credit card companies report ordinary credit card fraud as "identity theft" these days, jacking up the numbers. You have little at risk from someone stealing your credit card data. You don't owe that money! Fox News is probably the largest example of fear mongering, using their dire predictions to get people to buy gold and also to protest against a health care plan than likely benefit the lower classes the most. Fear SELLS, period. Don't be baited by it.