The Parable of the Non-Prodigal Son 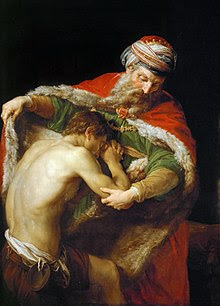 You may remember the parable of the Prodigal Son. It is another one of those Bullshit Insane Bible Stories for Crazy People, which, like Jonah in the Whale, makes no sense whatsoever. While the meaning of this story has been debated through the ages, one question remains: What ever happened to the Non-Prodigal Son? That story has never been told, that is, until now.

The original story is found in Luke 15:11-32. Jesus tells the story of a property owner who has two sons. The younger son demands his share of his inheritance while his father is still living, the son goes off to a distant country where he "waste[s] his substance with riotous living" and eventually has to take work as a swineherd. There he comes to his senses and decides to return home and throw himself on his father's mercy, thinking that even if his father does disown him, being one of his servants is still far better than feeding pigs.

But when he returns home, his father greets him with open arms and hardly gives him a chance to express his repentance. He kills a fatted calf to celebrate his return. The older brother resents the favored treatment of his faithless brother and complains of the lack of reward for his own faithfulness. But the father responds: 'My son,' the father said, 'you are always with me, and everything I have is yours. But we had to celebrate and be glad, because this brother of yours was dead and is alive again; he was lost and is found.' – (Luke 15:31-32)

Now the Non-Prodigal Son, as you might imagine, was pretty browned off by all of this. While his Prodigal Brother was off having a good time, he stayed at home, having to deal with his crazy Dad, and trying to improve the fortunes of the family farm with only half of the assets left. And amazingly enough, he managed to do well, through hard work and made the farm successful.

So his no-good Brother comes home, and what does Dad do? Well, he slaughters the fattened calf (the one the Non-Prodigal Son was hoping to take to market next week and sell, so they could buy much needed improvements for the farm).

Of course, the Non-Prodigal son complains to Dad about all this, but Dad will have none of it. "He hath returned!" the Father says, with a wild look in his eye, "He Hath Returned!".

"What the Fuck does that mean?" the Non-Prodigal Son replies, "That makes no sense at all. He wasted half the money in the family and now you treat him like some sort of returning hero."

But Dad just repeats, with that far-away look in his eye, "He hath returned!"

The next day, around Noon, the Prodigal Son arises from the basement and says, "Hey, check it out, Bro, I got a new Tattoo!" and he rolls up his arm to reveal the phrase "He Hath Returned" inked into his bicep. "Bitchin' ain't it?"

"Ain't he something?" the Non-Prodigal Son's ex-girlfriend chimes in, wearing nothing but a t-shirt.

"That's it!" the Non-Prodigal Son shouts, "I'm out of here! I'm tired of Dad playing favorites. I'm not going to work my ass off for this family, only to have my efforts squandered by my deadbeat Brother and my insane Father!"

So he demands his share of the inheritance, which now, of course, thanks to his hard work, is nearly equal to what his Brother received, and leaves.

At first, he tries to follow the example his Brother lead, leading a riotous life and indulging himself with wine, women, and song. But he finds it all very shallow and unappealing. He realizes that his Brother must have been an idiot to find gambling, drinking, and prostitutes attractive in any way whatsoever.

So he returns home to the Family farm. The place is in a shambles. His Prodigal Brother has done nothing to keep the place up, and the fields lie fallow, choked with weeds. One skinny cow is all that is left of the livestock herd.

"I have returned, Father!" the Non-Prodigal Son cries out.

"Big Deal" His Dad replies, "Very Original. Where have I heard that before?"

"Well, aren't you going to welcome me with open arms and slaughter the fatted calf?" he asks.

"We can barely feed ourselves here anymore, thanks to YOU leaving. Do you think we can afford another deadbeat mouth to feed around here? And do you see any fatted calves lying around?" Dad replies.

His Brother, walking up from the basement, says, "Yo, Bro, whas up?" and tries to give him a high five.

The Non-Prodigal Son finally realizes that he was getting the shaft all along. For some reasons unknown, his Father would always favor the Prodigal Son, would always cover for him, make excuses for his failures, and try to protect him. And the Non-Prodigal Son realized that no matter how hard he worked, his Father would never appreciate him as much as he did his deadbeat Prodigal Brother. The whole game was rigged from the get-go.

One day, on his way to work, he thinks about his Prodigal Brother and his Dad, and wonders how they ever made out. He thinks about sending them a post card or something, just to drop them a line.

But then he thought better of it.