Pssst! Want to get in on a risk-free investment? 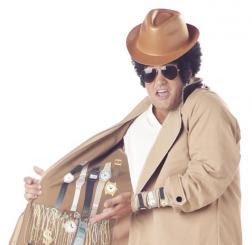 Pssst!  Want to get in on a risk-free investment?


Yea, you. No, don't look around. This is just between you and me. Come over here, I've got a great deal for you. Totally risk free investment! Yea, the rate of return ain't great, only about 5% or so. And chances are you're already invested in it. Sound like a con? No it ain't. It's real simple...

Oh, wait, you say, that's bad investment advice! All the investment gurus say that you should have as much mortgage debt as possible, and invest all your money in your 401(k)! After all, that's tax deductible, and mortgage interest is as well! Paying off your mortgage? That's old school - what Grandma and Grandpa did.

Yea, but Grandma and Grandpa did OK, didn't they?

Let's take these objections one at a time, and maybe you'll see why paying down debt is your best first investment.

1. Stop Dancing to the Government's Tune: Yes, there are tax incentives to investing in your 401(k) and tax dis-incentives to paying off your mortgage. Maybe the Government didn't intend it this way, but many people believe (wrongly) that it is a good idea to have mortgage debt, as you can deduct mortgage interest.

This misconception occurs because of well-meaning advice from accountants. For example, a friend of mine was making $100,000 a year and renting an apartment. His accountant, doing his taxes, noted that for the $2000 a month he was spending on rent, he could afford to buy a house AND deduct the interest on his taxes, effectively lowering his tax bill.

That's sound advice - if you are renting, and you can afford to buy a home, and homes are reasonably priced and not going through some stupid bubble, and you plan on staying in one place for a while (5-10 years), then buying a home can be a good tax strategy.

Unfortunately, people too this advice the wrong way. They assumed (wrongly) that if a small tax deduction on mortgage interest was good, then a larger one was even better. So they bought more and more house, until they reached the point of mortgage stress, where they could barely afford the payments, and moreover, never realistically pay off the debt.

Similarly, in the recent past, there were tax incentives to buying huge diesel-powered SUVs, as you could get a tax credit for buying a diesel vehicle, then depreciate it as a business expense. As a result, some folks ended up driving 6,000 lb. diesel trucks to work as their commuting vehicles, convinced they were "saving money" because of the tax incentives.

Then diesel fuel went up to $5 a gallon, and no one wanted SUVs. Would have been better off with a minivan, it turns out.

2. A 401(k) is a better investment because of the tax deduction: The tax deduction for the 401(k) is a great incentive and you should take advantage of it - up to a point. Where that point is, depends on your income and economic position in life. Since most 401(k) accounts are structured to invest in mutual funds, and most mutual funds are structured to invest in risky, high-rate-of-return stock investments, your investment in your 401(k) is hardly safe, as many of us found out over the last year (although it has bounced back nicely, hasn't it?).

Yes, it is possible to move your 401(k) into more safe investments, like a bond fund or something. But even bonds default, and the rate of return these days is paltry - a percent or two, at best. So it doesn't amount to a very good investment, in terms of safety or rate of return.

And the tax advantages might not be as great as originally touted. While you pay no tax on money invested in your 401(k), bear in mind that you will pay taxes when you take it out, albeit probably at a lower rate. And of course, you get to invest that tax money for the time period before retirement. But you will pay taxes, to some extent. You are not getting a totally free ride.

This is not to say you should not participate in your 401(k) or IRA.  Don't be an extremist.  Only to say that in terms of "safe harbors" paid-off debt is the safest there is, and as you get older, more and more of your "investments" should be in safe harbors.  Having a plan to get debt-free is important.  Perpetual debt is just not an option, nor is it desirable.

3. Housing Prices Fluctuate - it is hardly a "safe" investment! Right? Wrong! If this was true, then don't buy a house, period. Yes, during the last decade, prices shot up, then plummeted. People who invested for the short term, hoping to make a killing, got killed themselves. People who bought homes without doing research ended up bankrupt.

Housing prices will remain largely flat for the next decade. They will continue to drop for the next year, bottoming in 2011 or 2012 and then increase by 2-3% a year as in normal times. While the price of a home will drop, it will only drop so far. Unlike stocks, which can drop down to nothing, a home will always have some intrinsic value, if nothing more than as rental stock. There are rare exceptions to this rule, for example, in boom towns where people overbuild, and then abandon homes. But these sort of things occur only rarely. If you live near a major city in a good neighborhood, chances are, your home will always be worth something. (except if you live in Detroit or Flint, Michigan).

So if you pay off your mortgage, you end up owning something tangible and real. And then no one can take it away from you, unless you don't pay the property taxes. And if you need money, you can borrow against it, or sell it, cashing in on the investment aspect of it.

4. You Owe the Money Anyway: Even assuming housing prices fluctuate, you owe the money anyway. Unless you plan on abandoning your home and walking away from an upside down mortgage, you have to pay back this money someday, whether you like it or not. If you sell the house, the money from the proceeds pays off the mortgage, with the difference being paid back to you in cash.

If you have been paying off your mortgage, you will get a considerable amount of cash back, which means you have a down payment for a new house, if you have to move. But if you mortgage your house to the hilt, on the theory that "more debt is better", you may have trouble even paying off that debt, and walk away with nothing.

And with nothing to put down these days, chances are, you'll have trouble finding financing for a new home, as we are moving back to the era of 10% or even 20% down payments. So paying down that debt makes a lot of sense.

5. You already are investing in your House: With every monthly mortgage payment, you are paying down that debt already. It may be only a few hundred dollars a month ($500 in my case) but it increases by a small bit every month. Making even one extra mortgage payment per year can knock ten years off the term of a loan and tens of thousands of dollars in interest payments. This is a real savings, and it accelerates the payment of the loan, meaning each payment pays more off principle and less in interest.

6. Guaranteed Rate of Return: Your mortgage rate may be anywhere from 5-7% or more. When you pay down your balance, you reduce your interest by that amount. In effect, you are getting a guaranteed rate of return almost equal to your mortgage interest rate.

I say "almost" as the calculations equating reducing debt interest to savings interest are not exact, and also there is that tax deduction you get from the government. But assuming you are in the 35% tax bracket, that means for a 6% mortgage rate, you are generating a net savings effect of 4%.

Go down to your local bank and ask them for a 4% CD. When they stop laughing, you'll understand why paying down debt is not such a bad idea right about now. Most banks are offering 1-2% if that, on savings.

7. Retirement with No Debt: Retiring with debt is a very bad idea. If you are struggling to make the mortgage payment now, imagine how it will pan out when your income drops to zero. For many recent retirees, it is too late. They lost their jobs in the recession, and were over-extended on their mortgages, and lost much of their 401(k) in the stock market crash. They end up losing their homes and in bankruptcy, a crappy way to begin what are supposed to be the "golden years".

If you own your home outright, chances are, you will be able to afford to live in it, even if you have to live on Social Security alone. Without the monthly drag on your finances, you won't be forced to move.

And when you do choose to move (or they put you in the home) you will have a tangible investment that can be liquidated to cover your living costs during those "Golden Years".

8. Safe Investments as a Function of Age: One GOOD piece of advice many investment gurus give is to use your age as a percentage of your safe investments. Thus, at age 50, you should have half your investments in "safe" accounts, like government bonds. Real Estate, when not overheated in price, can be one of those safe investments. At my age (50) about half my portfolio is in a relatively safe investment, a paid-for house that I have had for five years. Even though the market has fluctuated, the house is still worth more than I paid for it.

At the present time, I am accelerating my payment on my mortgage on my other home. By the time I retire (age 65) both homes will be paid for, and most of my portfolio will be in "safe" investments.

Yes, I am still investing in my 401(k) plan, but paying down debt is also a form of "investment" that pays a steady dividend, in terms of reduced interest payments.

Everyone's ultimate goal should be to be debt-free. If you find yourself taking on more and more debt because you think that is sound financial advice, think again carefully about what real wealth really is. Owing money to people is not wealth, only debt.

Paying down debt is a safe "investment" and something you have to do anyway.  Saving money while taking on new debts is something that really makes no sense.   Spend less, learn to live with less, borrow less, and pay down debts, and over time, you will accumulate wealth.

Sadly, most Americans - myself included - tended to look at finances in terms of how much more debt they could qualify for.  A raise at work was not viewed as money to be banked or used to pay off debts, but money that would qualify them for even more debt.

Maybe this trend is changing, but I am not so sure.  People's economic memories are not very long, and a core group of Americans never stopped believing in the almighty God of debt, even as their false God smote them in 2009.