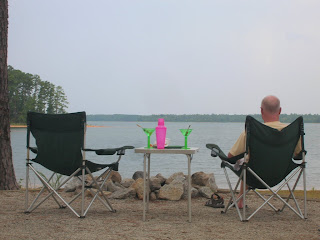 For some folks, this is a once-a-year dream vacation.   For me, this is just life.  If you want a lot of things in your life, you have to give up your time.   If you can live with less, you can have more time.  Your choice.
The other day, we were driving in Newfoundland and saw a trail by the side of the road.  We walked up it a kilometer and came to the end of the trail - the Appalachian Trail, as it turns out.  The view was spectacular and it was a very unexpected treat.  Now I can say I have walked the Appalachian Trail, or at least the last kilometer of it.

On the way back, we met two young Canadian lads on vacation and told them about the trail, and they were very enthusiastic to walk it.   We were comparing notes about our vacations.   We were spending two and a half months exploring Newfoundland, Labrador, the Gaspesie Peninsula, as well as Maine, and the Blue Ridge Parkway (and Mistletoe State Park, shown above, in Georgia).

They were flabbergasted.  "What sort of job do you have where you can take over two months off from work?"  They had to be back in Ontario in a week's time to get back  to their high-paying and important jobs.  But of course, they had nice clothes, expensive watches, the latest cell plans, a nice apartment in a trendy neighborhood, brand new cars, etc.  And they could afford to fly out to Newfoundland and rent a car - as they had limited time.

We drove a 10-year-old car and a 15-year-old camper.  We are doing without income for a month or so (although I managed to file a Patent on the road and make a thousand bucks).  It is a matter of choices - a half-million dollar motor coach and no time to drive it, or a battered old BMW and all the time in the world.

And yet, most people chose the former.  And yes, it  is a choice.  We all delude ourselves into thinking that we "need to work" to "pay all the bills" - and then anesthetize ourselves to the drudgery of our lives by buying new cars and electronic toys to distract us from the fact that our lives are slipping away, weekend at a time, while we work, work, work, to have things we largely don't need.

Tonight, I met a fellow who is about my age.   He worked in a gold mine in Canada, and at age 55 quit his job.  By the way, he confirmed that their cost of production at the mine is about $450 an ounce.  Why are people paying $1700 or more?  Bubble, period.

He decided to quit his job and spend a year in his RV.  Why not?  He has a basic 18-foot model he tows with a Toyota.  He parks it in gravel pits and on "Crown Land" which is free and permitted here in Newfoundland.  It doesn't cost much, and when he is done, there is always another mine to work in.  As he put it, why wait until age 65 or 75 when you are too old to actually DO anything?  Too old to Kayak, or hike, or even walk, in some cases?  Take time to enjoy life now, and get off the things bandwagon.

Doing things is better than owning things.   And as I tear through the remaining 1/3 of my life, this message is being driven home more and more.  I may regret many things in life, but I will never regret going out and doing things.  I will regret the times when I stayed home, convincing myself that it was more important to work to make money to make payments on things and services, than to go out and do what I really wanted to do in life.

It is a choice, even if we don't perceive it to be one...