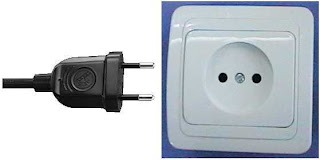 Unplugging from the media nightmare circus is important, if you want to learn to think for yourself.


Traveling to the remote maritime provinces of Canada, we have been out of reach of the cell phone and Internet for days at a time.   For some people, this is unthinkable.   How can you possibly live without your smartphone apps?  Without your texting?  Instant messaging?  Facebook?  Or the 24/7 News Channels, who fling fecal matter at your face all day long?

The answer is, of course, surprisingly well, and in fact, better than with all that electronic crapola in your life.

As I have noted before, electronic devices often act as a barrier to living - filtering life through the viewfinder of a video camera, digital camera, or cell phone.  You see things in terms of 140-word tweets or in Facebook updates, and not in terms of a personal, real experience.

And the television news is the worst of all - the sort of "Hey everybody, look at this!" kind-of-guy at parties who is oh-so-annoying.  Maybe we don't want to look.  Maybe we shouldn't all be thinking the same things and looking at the same stories - it doesn't expand our experiences much.

The latest thing, of course, are these flash mob riots, both in the UK and in the USA.   Social media, we are told, is now a weapon for violence and destruction - with people texting each other as to when and where to vandalize, destroy, and even kill.  It is being "plugged in" in the most evil sort of way.

The folks who participate in such actions - which are contrary to their own self-interests as well as society as a whole, are overly plugged-in to this electronic world.  To them, what is going on in a virtual world is more important than what is going on in real life.  And the person being beaten to death is not "real" to them, but just another avatar in a violent video game.

Electronic life is a dead-end, both personally, intellectually, and fiscally.   You cannot get ahead, financially, by being plugged in all the time.   At some point, you have to interface with the real world.  You cannot make a living in Linden dollars or Bitcoins.

The funny thing about being "unplugged" is how little we miss it - and how little the virtual world misses us.  We finally got cell service in Nova Scotia, and after two weeks, there was only one missed call and one voice-mail message - by a client alerting me that he was sending an e-mail.

And most of the e-mails in my inbox were of the "delete" variety.  Most of the others were things that could be put off for a week, a month, or even a few months.  In short, nothing online was really demanding our attention.

And as for the news?  Logging into CNN.com was interesting after listening to the CBC for two weeks,  What seems important to Americans seems somewhat superficial and silly.   Celebrity news, trends and fashions, alarming or humorous videos, that sort of thing.   Very little of what is "news" is really news.   And in many cases, a "hot story" is designated to oblivion after a week or two or even a day or an hour.   If you did not hear the original story when it aired, you will never hear it later on.  It's almost like, well, it didn't happen at all.

Which is an insight.  What happens to someone across the planet on any given news day may be interesting - in that lurid sort of slow-down-to-gawk-at-an-accident sort of way, but not really useful information on a personal level, other than to depress you just a little more and get you to think the world is an awful place and why bother trying.

Unplugging from the data stream is a good thing.  And I look forward to doing it more.  I hope they have really shitty Internet and Cell service in Labrador....