The Death of Home Economics - and its Resurgence? 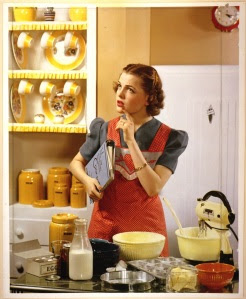 Learning how to take care of yourself is the most important thing you can learn.  Today, there are forces at work to stop teaching people these basic skills - because many industries thrive on your ignorance.


On CBC Radio two today, an interview with a woman who is trying to bring back Home Economics to the High School curriculum.  Where did it go?  In the States, and in Canada, "Home Ec" as we called it, has been dropped from the curriculum of many schools, in favor of "Readin' Writin' and 'Rithmatic" type courses, on the premise that school children are not learning "the basics" anymore.

What could be more basic than knowing how to feed yourself?

At one time, Home Economics was an honored course of study - one that girls (and even boys) could take for every semester in High School, at least when I was a kid (back in the 1900's).  My Grandmother even majored in Home Economics in College and received a B.A. degree in it (much to my Mother's chagrin, as the nesting instinct never took hold with her).

Today, such courses are cut from the curriculum, and Home Ec is seen as a relic of the past.  Which is too bad, as it has a lot to teach young people today - it is a means of empowerment.

So things like Music and Art, and Shop, and Home Ec, and Driver's Ed, are all tossed in the trash bin, replaced with more study halls and courses in self-esteem.  Of course, never touch the Football or other sports programs!  Those are sacred cows in most U.S. High Schools, even though such programs benefit few students and rarely lead to careers or jobs for those who participate.  And lets not talk about sports injuries.  It is all fun and games until you hit 50 and that "trick knee" really bites you on the butt.

Why is Home Ec important?  And why do some folks want to see it killed off?  One answer leads to the other.

Knowing how to run a home, prepare a meal, balance a checkbook, and do all the basic things of everyday living is vitally important to all of us.  However, few of us were trained to do so, and as a result, we stumble through life learning lessons the hard way - or never learning them at all.

Most people claim they "can't cook" - a mantra so many people chant today, despite the popularity of cooking shows and even channels (which turn food into a reality show contest, not a "how to" type of thing) and so-called "gourmet kitchens".  People spend hours a day watching someone else cook food on the TeeVee and then they go to their fabulous expensive kitchens and warm up entrees that were often made halfway around the planet.

And I kid you not on this last point.  At a grocery store one day, Mark picked up a frozen entree (which is out of character for him) thinking that "Cocoanut Shrimp" sounded pretty good and that the price was reasonable.  I read the box and was shocked to discover that the product was made in Vietnam.  I was puzzled as to how it was economically feasible to have someone at a point halfway around the globe from me, cook my food, flash-freeze it, and then ship it across the planet so I could eat it.  It just didn't make economic sense.  And many folks think it doesn't make environmental sense, either.

And as you might guess, the pond-fed shrimp were bland and tasteless, and the "Cocoanut" breading was laced with sugar.  We never bought that again.  But many people do - and if you watch what other people buy in the grocery store, it is often very frightening.

A recent trip to Sobey's is a case in point.  Several shoppers had six or more two-liter bottles of soda pop in their carts.  One fellow had nothing but Root Beer and Hamburger - the latter apparently being the only thing he knew how to cook (At least he can cook something!).

Others have all frozen entrees.  In the food business, such customers are called "Eskimos" - they do most, if not all of their shopping in the frozen food aisle.  And while such prepared entrees seem "inexpensive" they are usually double the price of the same foods prepared from raw ingredients.  And usually, such entrees are loaded with salt, starch, and sugar.

But increasingly, people cannot cook.  And if they do cook, they merely follow instructions on the back of  a box and microwave or heat a prepared meal.

And right there is why Home Ec is dead - the processed food industry, as well as the restaurant industry, don't want people to learn to think for themselves or even cook for themselves.  And it is a strategy that is working.  More and more people are using restaurants as their kitchens, and it is showing, in terms of their personal financial situation as well as their waistlines.

And while Home Ec is dropped from the curriculum, the School Board decides to put in vending machines in the high school to sell soda pop.  Why not?   Those nice people at Coke and Pepsi say they will pay for new uniforms for the football team - and that IS important, right?  And while we are at it, let's just replace the School Cafeteria with a Pizza Hut or McDonald's.  It's what the kids like  to eat, anyway, so why not just cut to the chase?

But Home Economics, as the name implies, is so much more.  It teaches concepts like budgeting and basic financial planning.  And again, without such an education, most of us stumble along in life, not understanding how dangerous credit can be and how important it is to watch where ALL of your money goes, rather than just spending it willy-nilly until the credit card is over the limit.

And again, guess who doesn't want this taught to people?  Well the banking and credit card industries, for starters.  They make a LOT of money out of other people's ignorance and lack of discipline.  So no doubt they don't shed a tear when Home Ec is tossed into the waste bin in favor of some cheerleading course in "self esteem".

I am not saying, of course, that there is some grand conspiracy theory at work here, because, as I have noted before, I don't believe in conspiracy theories.  However, things do just sort of fall into place over time.  Perhaps a School Board member works for a food processing plant - and is inclined, perhaps even subconsciously, to disfavor Home Ec.  Why bother teaching that?  After all, people can just buy his processed frozen entrees, so there is no need for Home Ec.   Besides, most couples have dual careers, so no one has time to cook anymore, right?

Right.  I will have to address that last issue in another blog posting.  How did we get snookered into believing that it was "progress" for a typical family to have two working spouses, working 50-60 hours a week each (as opposed to the 40 hours our Fathers worked) to have the equivalent standard of living of 40 years ago?  Under the rubric of gender equality, I think we were snookered into working twice as hard, just to have a mound of crap parked on our lawns and electrical gadgets in our homes.  But that is a subject for another posting.

We need to bring back Home Economics, I think, and update and modernize it for the new generation.   Knowing how to take care of yourself is important for people of both genders.  A student graduating from school should know how to prepare a meal - from other than a package - and know how to balance a checkbook and prepare and follow a budget.

When I was in High School, it was not even offered to boys - other than a few adventurous ones who insisted on being allowed to attend classes.  Obviously, that was wrong.  But today, it is offered, in many schools, to no one.  And that is an even greater wrong.
Newer Post Older Post Home