Another Day, Another Self-Serving IPO 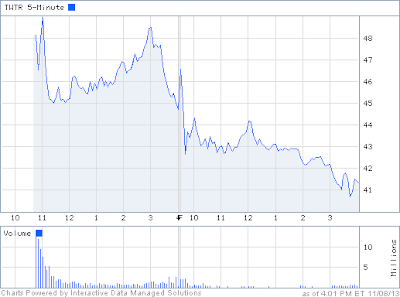 The Twitter IPO had the desired "pop" they wanted.  Who does this profit?  Not you.

Another day, and another self-serving dot-com IPO hits Wall Street.  As I wrote before in The Nature of IPOs, particularly the dot-com kind, the whole purpose of a moden IPO is to make the founders wealthy.

How does this work?  Simple.  But first let's review what IPOs were and what they have become.

In the good-old-days of Corporate America, you did an IPO to sell stock to fund your company.  The IPO provided capital for investment in machinery and materials, so you could build cars or make steel, or whatever - ventures that required a lot of capital to start.   So you sold off a good chunk of your company to make money.

Alexander Graham Bell (no relation) had to sell off more and more of his stock, over time, to investors, in order to raise capital to make phones (which were leased, not sold).   In the end, he owned less than 5% of the company - and his wife sold half of that in a panic when the stock price spiked.  He still ended up rich, but not as rich as he could have been.

Today's IPOs are a different beast.   Yes, they sell you the story that they are doing the IPO to raise capital for investment.  But it is a bullshit story.   Instead of selling off 95% of the company to raise money, usually they sell off only 4-5% of the company (read that again - four to five percent!).   And they don't "need" the money to "expand their business" as the amount raised in the IPO is often trivial compared to the amount of cash on hand.

In fact, with today's IPO's they leave most of the money on the table by allowing the stock to "pop" in price on the first day.   What does this "pop" mean?  It means that institutional investors and others who "subscribed" to the shares at the opening price can immediately sell their shares for nearly double the money.  They make as much money, in one day, as the company "raises" in Capital.

If this were an old-fashioned IPO, people would scratch their heads and say, "That makes no sense!  How are you going to raise the most amount of money to build your steel mill if you let some banker take half of it?"

What it needs, or more precisely, the FOUNDERS need, is a way to "cash out" of their investment in the company.   They are paid in stock (or invested and got stock in return) and they want to sell it as a regulated security on the open market, where chump investors in the general public will pay top dollar to "invest" in "the next big thing!"

OK, so the Twitter IPO is a day old now.  What happened?


1.  The people who got subscriptions to the stock at $26 a share sold out at $45 to $50 a share and made a ton of money.  This was not you and me, but institutional investors and big money players.

2.  The insiders in the company, who are paid in stock, now are worth Billions, at least on paper.  To cash out, they will have to sell their shares, over time.   Most are locked out from selling for 180 days.   Wait until that day comes....

4.  We are ONLY ON DAY TWO and the stock has tanked by 7.24% from its close yesterday.  That's a heck of a drop from the pop!  A few more days of this, and it ain't gonna be pretty.

5.  If you were unfortunate enough to pay nearly $50 a share (as some did), your shares are now worth about $41.  You just lost 18% of your investment, overnight.
Gee, wish I invested in that IPO.

Will Twitter tank as well?   Let's look at a brief history of some famous hyped IPOs of the last few years:

1. Groupon: Groupon went public with the same amount of hoopla and the same vaunted "Market Cap" as Twitter. The stock then tanked about a year later and the founder and CEO was forced out. He was so upset by this, he wrote a sardonic resignation e-mail. You see, he has more money that God, now, and being fired means only that he can now spend it at his leisure. 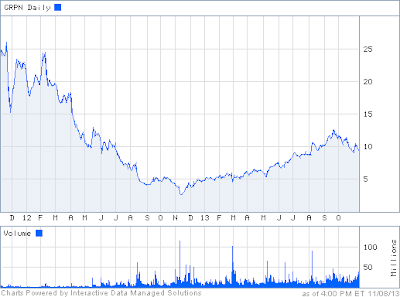 Groupon's model was copied by others and the product turned out to be a fad. The share price is rising in recent months, but the company is still losing money (-14 cents a share). Where is this going?


2. ZipCar: ZipCar at least sold a physical product - car rentals - and was more than a mere website. Problem was, car rentals are a capital-intensive business, and a costly one as well. ZipCar never made any money to speak of, and the stock price tanked, after the IPO. Again, look at the chart below and the cart above - do you see a pattern here? 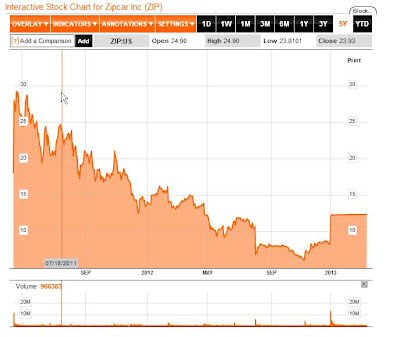 AVIS finally bought ZipCar for a fraction of its IPO price. And they probably did this just in time to prevent ZipCar from going bankrupt (why else would ZipCar management sell?). Unless you bought the stock just before the AVIS purchase, you lost out.

Bottom line on ZipCar: The small investors who bought at the IPO price lost their shirts - again in a market where the DJIA was skyrocketing. Are IPOs a great investment? No.


3. Zynga: Zynga was another dot-com stock that went ballistic at the IPO, largely because of the anticipation of the Facebook IPO. But like Facebook, it did a face-plant as well: 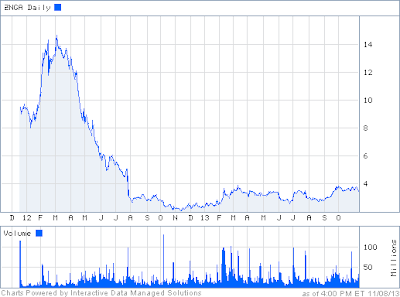 Zynga made games like "Farmville" (remember THAT?) and people lost interest in the games. Unlike ZipCar and Groupon, there has not been a "bounce-back" as of yet. If you bought at the IPO price, you got creamed on this one.

Again - and this is important - it is very hard to make money by buying a stock and then having it lose more than half its value. And with no profits (and no dividends) there isn't even income to fall back on.

4. Facebook: Facebook is one success story of the lot (sort of), even with the "botched" IPO. But whether this makes any sense as a long-term investment remains to be seen. Facebook is showing profits, finally, of 41 cents per share. This gives it, at the present share price, a P/E ratio of 116. 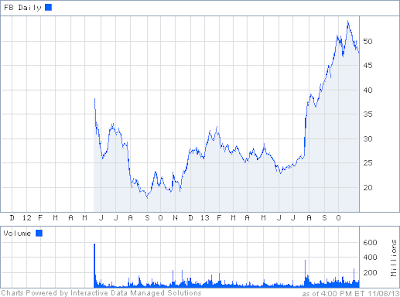 But P/E ratio represents the number of years you'd have to wait to make your money back on this stock. In other words, 116 years. Facebook is profitable, yes, just not that profitable. In order to show a more reasonable P/E ratio, Facebook either has to increase profits by a factor of five, or the share price has to decrease by a factor of five. You pick.

The Facebook experience shows that profits do matter. Facebook's IPO face-planted largely because the profitability of the company was in question. Once the profits went up, so did the stock price. Twitter, losing 30 cents a share, better figure out how to make money - and fast.

5. Linked In: LinkedIn is the darling of the dot-com investors. Why? Because the share price has soared and the company actually makes a profit, albeit not a large one. Yea, Linked-In is making 30 cents a share. But at the current share price, that yields a P/E ratio of over 700. That's scandalous. 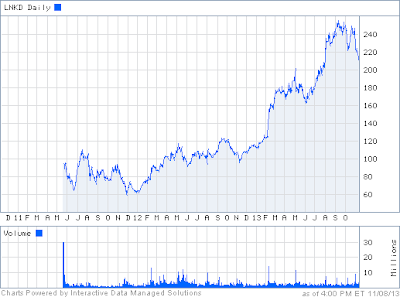 People who pay that much for a stock are "buying ahead" just as home buyers in the late 1980's and 2000's did - banking on rising prices to make their overbidding a good investment later on.   But eventually, LinkedIn is going to have to make a profit that justifies its share price - or the share price will have to tumble to provide a more realistic P/E ratio.   At a P/E ratio of over 700, LinkedIn is nearly seven times higher than Facebook.   Where is this going?   Do you think that LinkedIn can grow profits by a factor of 10-20?

Buying Facebook or LinkedIn is an act of faith - and faith-based investing is a bad idea.   You are gambling that someone else will pay even more money for the stock down the road, based on the idea that it is "worth" more, even though the profitability of the company is tiny compared to the share price.

In other words, you are waiting for a greater fool than yourself to buy the stock.

But for the small investor, this sort of gambling is never a good idea.   Why?  Because for every Linked-In or Facebook, there is a Zynga or Groupon or Zipcar.   In fact, the stinkers outnumber the winners, every time.  And even the winners here, as suspect.

And picking winners is never an easy task.   First to market is often last in the marketplace.   And in the Internet world, a year or two is a lifetime.   A decade is a Century.   Few remember today, the fate of AOL - which was once American's premiere online portal.   At one time, it seemed like half the country was on AOL.   They even bought Time-Warner, they had so much money - at least on paper.

And then it went bad.  Not overnight, and not suddenly.   But eventually, other means of accessing the Internet came about.   No one wanted to use AOL KEYWORDS anymore, but would rather search using something called "Google".  AOL faded from view and Time-Warner extricated itself from the wreckage.

Gambling your retirement on trendy, hyped stocks is just not a good idea.  Diversify your portfolio, invest in a number of different things.   And as you get older, invest in more conservative investments, as you can't afford to gamble on IPO stocks.

Tech stocks and dot-com stocks are very volatile - and usually over-valued.   Investing in the tech sector is not for the faint of heart - or the small investor.

Will Twitter be the next Facebook?  Or Linked-In?  Or Groupon?   It is hard to say.  And it is hard to predict how long even the successful dot-com stocks will keep being successful.   If you look at the metrics on Facebook and Linked-In, they make no sense at all.

And as a simple rule of thumb, it never pays to invest in something you don't understand.